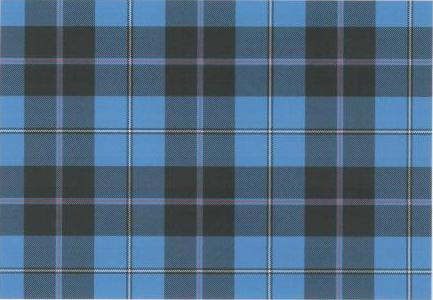 The Sorbie tartan was formally registered with the "Scottish Tartans Authority" on 20th August 2004.

Voted for by sixty of our most active family members in the UK, USA, Canada and New Zealand, the above design was unveiled as the official Sorbie tartan on 10th February 2003. It is based on the 'Galloway' tartan which is derived from the homeland of the Sorbie family, but is of a blue shade rather than the more often used green effect. It can be worn by anyone with the surname 'Sorbie' or a descendant of a person called Sorbie (regardless of surname).

It emerged as the clear winner from four alternatives, all designed by Colin Hutcheson who was Managing Director of one of the largest kilt makers and tartan clothing specialist in Scotland, Kinloch Anderson, for 18 years but is now semi-retired and working as a director of another large woollen company, "Johnstons of Elgin". 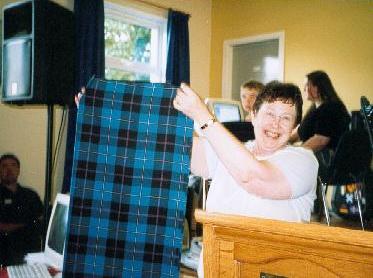 Muriel announces the new tartan at the U.K. gathering 2003

Thanks to Muriel Sorbie of Edinburgh who commissioned Colin to design the pattern, we now have a tartan to call our own. This has now been registered in conjunction with Brian Wilton, the Chief Executive of the Scottish Tartans Authority.

The next step was to decide how much cloth should be woven. This was done and the first Sorbie goods to be manufactured were ties and scarves. These were produced by Strathmore Woollens of Forfar, Angus. This project was completed in July 2003 and the result met great approval from the family gathering held that month. The merchandise is now available for purchase - for further information on availability and prices, please contact Muriel Sorbie. 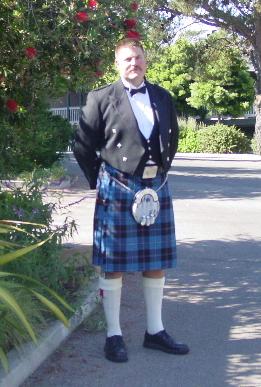 We have now made some additional items available such as ladies skirts, gents trousers, waistcoats and of course kilts.

Again please contact Muriel if you wish to make an order. 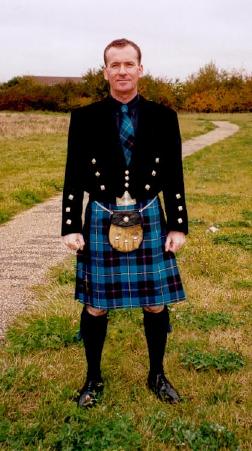 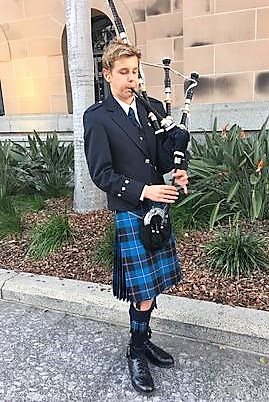 A number of our family members have asked if we have an official Sorbie Crest or Coat of Arms. The answer is unfortunately not. The reason is we are not a clan & do not have a chief so there is nobody to apply for a crest. Unfortunately these matters are not subject to democracy but to primogeniture (the right, by law or custom, of the first born child to inherit the family estate, in preference to siblings), so we can’t vote someone to be our chief.

It would be ok for someone to design a crest for use outside the UK. However it could not be used within the UK without the risk of legal action. The Court of the Lord Lyon based in Edinburgh is the heraldic authority for Scotland and deals with all matters relating to Scottish Heraldry and Coats of Arms. The office of the Lord Lyon is not called the COURT for nothing – having full legal powers. It has its own Procurator Fiscal, an independent prosecutor which will take action against forged Coats of Arms. Similarly the College of Arms in London is the official heraldic authority for England, Wales, Northern Ireland and much of the Commonwealth including Australia and New Zealand.

A CAUTIONARY TALE - PLEASE BE AWARE..!!

We have found the following link on the Internet for a company ‘House of Names’ supposedly advertising the 'Sorbie Crest' and 'History' http://www.houseofnames.com/Sorbie-family-crest

This company like a number (mostly based in the USA) prey on people by putting together bogus histories on families and produce fake coats of arms. They also sell various memorabilia and souvenirs such as Sorbie Mugs, T-Shirts, Key Chains and other items. The history given on the Sorbie name falsely states we are an off-shoot from the English 'Sowerby' family which is incorrect as we are a totally separate. A lot of other detail on their ‘Sorbie’ page looks uncannily like information on our own Sorbie website which you are now browsing. Do not be taken in by these peddlers of fake family trinkets and souvenirs.

All in all, this means that we are never likely to achieve clan status or a crest. We will have to be satisfied with our tartan & having a great family relationship which is much closer than most clans!

If you require further info on this subject:

“The Myth of Family Coats of Arms”:Taken from ‘Eastman's Online Genealogy Newsletter’.