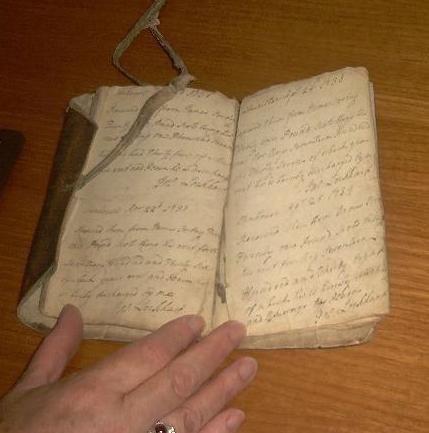 The earliest date for rent in this book is probably about 1722. However, the earliest legible entry is for 1724 and records that a William Sorbie paid rent of fifteen pounds Scots money. From 1727 the rent is recorded as being paid by James Sorbie and it looks as if he is described as being the nephew of William. In 1730 James is recorded as paying rent of six pounds Scots for a house formerly the property of his Aunt Janet. The entry for the next year can be seen on the right hand page of the photo above and is easier to read. It records:

“Apr. 22nd 1731. Received then from James Sorbie Twelve pounds Scots money which with his former payments compleats his rent for five shilling land and muir and the house formerly property his Aunt Janet (possibly Harvie or Garvie) for the year one thousand seven hundred and thirty, of which years rent and kain he is hereby discharged by me.

The Lockharts were one of the major landowning families of Stonehouse.  John, James, Alexander and William all represented the area as Members of Parliament between 1607 and 1857. Lockhart Street was named after Major General Lockhart and is one of the main thoroughfares through the town.

James continues to pay rent until 1770 and in 1771 another William takes over. It is believed that this is his son, born 1744 in Stonehouse. William married Jean Jackson of Strathaven in 1773. The last entry for rent thereafter is 1792.

(Kain or cain is the old Scots word for rent in kind).

However, there are other entries, notably a contribution to the Minister’s salary, the earliest date for which is 1708, the only part of that entry which is legible, although the signature looks as if it reads Thomas Millar. In about 1714 or 15 the Minister becomes John Scott and he continues until 1757 (in which year the book is signed by his wife), then from 1764 to 1770 the vicarage is paid to James Morehead. These sums are not paid annually, but every 3-4 years.

The final set of entries relate to the schoolmaster. The first records James Sorbie paying three shillings Scots money for the years 1735 and 1736. These payments also continue until 1770 and are all signed by Robert Denovan.

Back to 'The Sorbie Quest'