Trying to piece the puzzle together

My name is Andy Potts and I live in Manchester, England and have been investigating the 'Sorbie' surname for over 25 years. The 'Sorbie Quest' was initially prompted in 1995 when I was discussing genealogy with a friend Hugh Robinson and to our huge surprise we discovered that Hugh was related to my wife, Avril through the 'Sorbie' connection. We were flabbergasted to find out they were actually 5th cousins. They are both the descendants of a marriage that took place in Stonehouse, Lanarkshire, Scotland in July 1797 between Thomas Sorbie and Janet Thomson. Whilst Hugh's family soon emigrated south to England, Avril's have remained in the area ever since. To date, thanks to the research carried out by our Sorbie cousins we have discovered 5,500 other descendants of Thomas and Janet!

Extract from the 'Old Parochial Register' for Thomas and Janet's marriage.

Going back a generation even more Sorbies can trace their descendancy to Thomas' parents John Sorbie and Grizel Millar who married in Stonehouse in October 1765. Over 6,700 people in our family tree are descended from this couple. John was born in 1740 and we believe William and Gavin Sorbie, born in 1744 and 1748 to be his brothers. Each named his eldest son James and we are certain that this was the name of their father. All this fits in with a James Sorbie who owned the "Sorbie Rent Book", the oldest known document in possession of a family member. In the 1696 census of Stonehouse the ONLY Sorbies living in the parish were James Sorbie, his wife Euphemia Farrie and son James. They were located in the actual town itself.

In 1727 the rent book notes that James Sorbie paid the rent on "that toft house formerly the property of his aunt Janet Farrie". So this vital clue tells us that James, the rent book owner was the son of James and Euphemia. This gives us a direct link back to the late 1600’s and virtual proof that nearly everyone is descended from this ONE Sorbie family that lived in the Parish of Stonehouse at that time.

This makes everyone VERY closely related. It is our belief that James or his immediate ancestors moved 100 miles north to Lanarkshire from the Wigtown (Sorbie) area of Galloway in the mid/late 1600’s. Maybe this was to avoid the persecution of the “Killing Times” that took place in 1684-85. However there is no proof of this but it is pretty certain that all the Sorbie families living in Wigtownshire had vanished by the early 1700's.

However before this time the picture becomes a little hazy with information hard to come by. Ultimately we hope to solve the riddle of where the Sorbie family actually came from and the true story of their connection with the village of "Sorbie" in Wigtownshire, in the south west corner of Scotland.

The Cross and King Street, Stonehouse.

Because of our mutual interest it was decided to embark on the 'Sorbie Quest' and try to fit the whole family puzzle together. This is a project worth attempting because the surname is an unusual one with a limited number of people having the distinction of bearing it. Little did we know it would become a real passion, almost an obsession. Along the way other family genealogists have come on board so that now, 25 years on we have built up a "Full Sorbie" tree of over 17,500 connected individuals, either bearing the Sorbie name or being related to them.

It has recently been said that this is virtually a "Stonehouse tree" because of the way all the local families intermarried and were connected. But obviously it is more than a process of just collecting names. We also want to gather together stories and anecdotes and also tangible evidence of the past such as photos, letters and family documents. 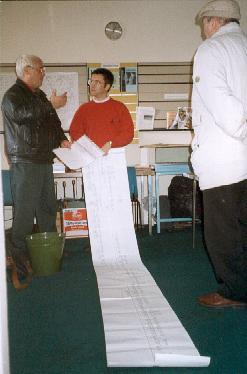 Stonehouse - October 1998. Andy Potts (centre), with Harry Carty (left) of the local Heritage group and George Sorbie McMillan. The Sorbie family tree is starting to take shape. 20+ years down the line it could probably stretch from one end of the Main Street to the other..!!

With the help of our good friend Tom Sorbie who grew up in Stonehouse we have made many acquaintances in the town and got to know a number of Sorbie families. They have been happy to pass onto us valuable information and been extremely hospitable. We have also made contacts all over the world and have established a very active e-mail group consisting of over 125 related 'cousins' from the UK, Ireland, North America, Australia and New Zealand. As recently as 2016 we have also made contact with family members in Buenos Aires, descended from a Sorbie who emigrated to Argentina in the 1830's. Mary Sorbie born June 1859 married James McRevie 15th August 1877 in that country. There are now over 200 descendants from this marriage now living in and around Delores about 90km from Buenos Aires the Capital City.

A number of relatives even travelled from the USA and Australia to join us at our various family 'Gatherings' held in Scotland over the last 20 years. Further successful events have also taken place recently in Wisconsin, U.S.A. and Ontario, Canada. Acquaintances have been made and lasting friendships forged. It has been time well spent and has given rise to immense rewards. 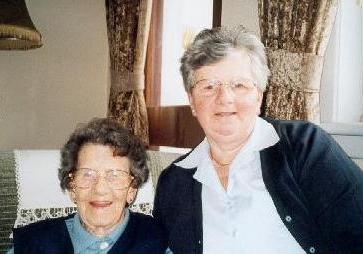 I will be happy to supply you with the family information in our possession. How much do you know about your own line of the Sorbie family? This obviously includes all those individuals with the Sorbie name and also their descendants. Please give me as much info as you can as it would be great if we could fit you into our Sorbie tree. If so, you will suddenly gain a massive number of friends and cousins throughout the world. If you don't have much to tell us don't worry, please e-mail Andy Potts anyway just to say "hello" and let us know who you are. 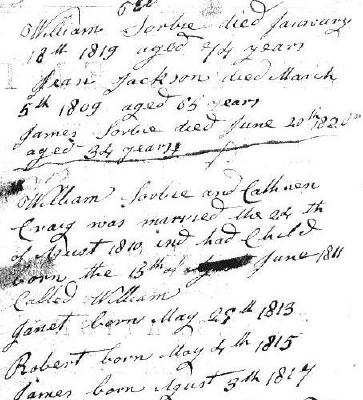 A number of our group live in the U.S.A. and Canada and all of them can trace their Sorbie roots back to Stonehouse or the neighbouring parishes. Most American Sorbies emigrated from Scotland in the early 1900's when a sizable percentage of the population went overseas looking for work. Although an intrepid few did cross the Atlantic long before then, some taking part in the American Civil War. 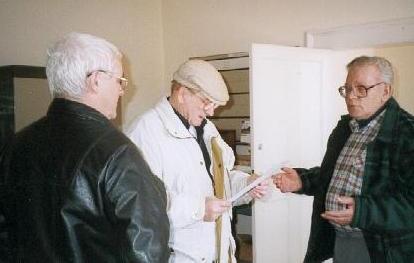 I hope you will be able to respond with some details of your own Sorbie family line (however basic) and if so we should be able to help you in your research. It would be great also if you would like to join our Sorbie e-mail group and take part (whenever you feel like it) in our discussions about family history and all related subjects.