Robert Sorbie, the fourth son of Thomas Sorbie and Janet Thomson was born in 1811 and married Marion Wilson Stewart in Stonehouse in January 1830. They had twelve children between the years of 1830 and 1856, including James, born May 1st 1847. This has proved to be a very strong Sorbie lineage, as we are now aware of 270 descendants of Robert and Marion, many of whom now live in the U.S.A. and Canada.

Their son James married Helen Hamilton on December 31st 1867 in Stonehouse. They had five sons and two daughters including Matthew born December 1879. This is a very unusual Sorbie Christian name and he was named after James' brother, born in 1832.

Matthew who worked as a labourer, lived with his parents in King Street and then New Street in Stonehouse. At the commencement of the First World War he enlisted in the 7th Battalion of the Cameronian (Scottish Rifles) Regiment who were based in Hamilton, Lanarkshire. On June 3rd 1915 he married Elizabeth Fleming, a farmer's daughter, at 19, Howard Street, Glasgow, although Matthew's place of residence was given as 41, New Street, Stonehouse.

Matthew and Elizabeth Sorbie had nine children including William who was the youngest, born on February 9th 1935.  William followed in his father's footsteps and enlisted in the Cameronians in the mid 1950's. 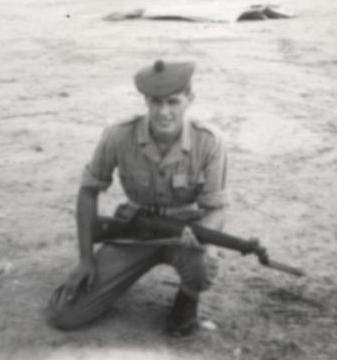 On February 4th 1955 the Baghdad Pact was signed. Sponsored by the United States and Great Britain, it was a mutual security agreement between Iraq, Turkey, Pakistan and Iran.  This resulted primarily from post-war fears among the NATO countries of Soviet expansion in the Middle East.

Talks were held on an ongoing basis and in May 1957 they were based in Karachi, Pakistan, a fledgling country which had recently broken away from the control of India. Hosting the conference was Pakistan's President, Iskander Mirza, an Indian by birth who had come to power in March 1956.

Private Sorbie, aged only 22 years formed part of the 'Karachi Guard' who were selected to provide security for the British delegation led by Foreign Secretary, Selwyn Lloyd. Later events testified as to why a military 'bodyguard' was necessary in such a volatile climate. 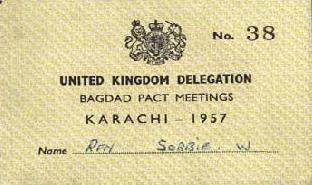 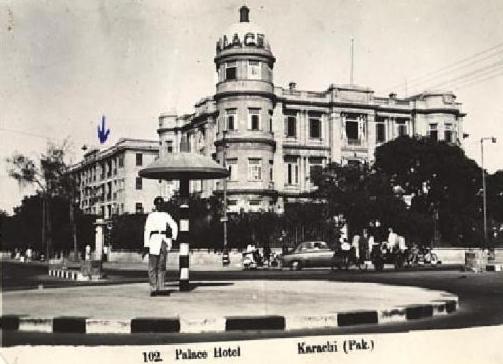 The British Party at the talks were based in the Palace Hotel, Karachi

Iskander Mirza had been educated in England and had attended the Army Officer college at Sandhurst as a young man. He had then spent a year on attachment with the 2nd Battalion of the Cameronians based in India in 1921, which at that time was still part of the British Empire. In 1926 he had transferred to the Indian civil service, working his way up through the government to become the first Defence Secretary of Pakistan in 1947 and then in 1954 the Governor of East Bengal. In 1955 he entered the cabinet of Muhammad Ali Bogra as Interior Minister, and quickly became Governor General of the country in 1955. The following  year when the republican constitution was adopted he became Pakistan's first ever President. 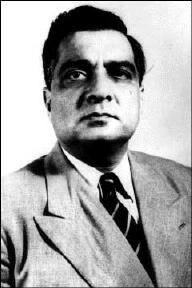 However Mirza never forgot his early years in England and when he heard a detachment of the Cameronians was with the British delegation he asked their senior officer, appropriately a Captain Cameron to join him for lunch the next day. That evening he entertained a small group of five riflemen from the 'Karachi guard' including Private Sorbie at his Presidential house. Breaking with protocol he spent time with them reminiscing about his service with the regiment while drinks and food were served. Finally he wished them good luck and shook hands with each of them in turn, an honour indeed for the Cameronians and specifically the men selected to represent them. 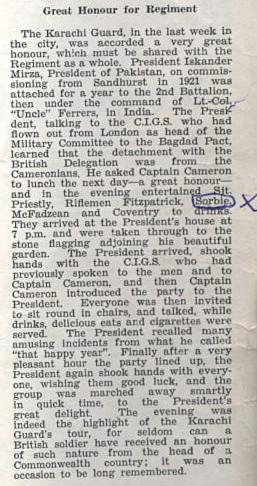 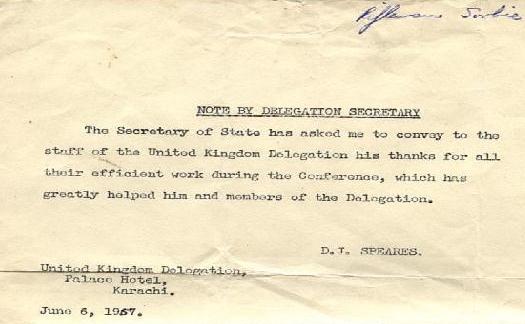 Letter from the delegation secretary thanking William for his efforts

Despite such a hospitable gesture the future wasn't too bright for Iskander Mirza.  The Baghdad Pact broke down in July 1958 when a swift coup took place in Iraq, their leader Nuri as-Said was assassinated by a mob and Islam was proclaimed the national religion. The country formally withdrew from the pact the following year when diplomatic relations were restored with the USSR. The uneasy tensions in the Middle East proved too much for the brittle pact and it soon collapsed having achieved little in it's four years in existence.

In Pakistan the political climate was similarly volatile. After the country's decline into corruption and lawlessness, martial law was declared and Mirza resigned on October 27th 1958. His office was handed over to the head of the army, General Ayub Khan who became Pakistan's 2nd President. The story given out to the public was that it was a voluntary transfer of power, but in reality the transfer letter from Mirza was extracted at gunpoint by the 3 military members of Ayub's new cabinet. Mirza was immediately exiled from the country by the new man in power and he died just over 10 years later in London, having returned to England where he had spent much of his early life.

William Sorbie married Janet Moir from Rutherglen, Glasgow in Strathaven in October 1959. They had no children, but a large number of nieces and nephews. He died on April 24th 1986 in Stonehouse at the early age of 51. Janet Sorbie still lives in the town and is extremely proud of her husband's achievements.

Acknowledgment : Thanks to William's widow Janet Sorbie for the generous loan of the above documents.