Thomas "Tam" was born in Stonehouse on 5th May 1849 and was the sixth of Thomas Sorbie and Grizel Millar's 12 children. His father Tom was a Beamer before him and he carried on the family tradition. Tam married Catherine Lang in December 1887 in Stonehouse and they had four children, Thomas, John Lang, Gavin and George (the youngest, born in 1900). Tam's son Gavin died at the young age of 15 years in 1913, but Thomas and John Lang Sorbie lived to 1982 and 1963 respectively. It is not known whether George survived to adulthood.

John Lang was the father of John Sorbie, who served on the "S.S.Athenia" in 1939, also featured in the "Famous Sorbies" section. With his extremely small stature, Tam was a well known local character and has been featured in a number of local history books. Recently he has been celebrated in a folk song penned by local historian John Young about the "Stonis (Stonehouse) Cushie Weavers".  ('Cushie' is a term of endearment). 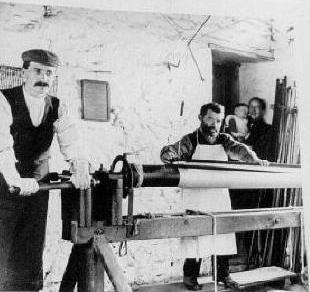 After the weavers bought the yarn from 'agents' in the town, usually in a paper bag, his first port of call was always the 'Beamer'.

Tam the Beam' was the sole purveyor of this service in the late 1800's, as mechanisation began to signal the decline of the weavers art. Tam wound the the yarn round a circular wood beam belonging to the client, his machine  resembling a heavy mangle with a hand-worked iron winding handle, which the client turned while Tam did the beaming. 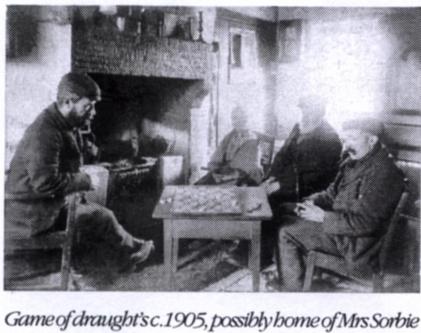 The unmistakeable Tam, far left enjoying some time with friends.

The weaver then carried home the Wab, or beam of 'Warp' yarns, for insertion into the back of the loom. The main job in hand was now the transformation in the loom from yarn to finished weave. The action of the shuttle, furiously flying backwards and forwards across the Jacquard machine, interlaced the obverse warp with the transverse weft. The loud clattering of the machine and the 'stour' (dust) in the air were the distinctive features of a weaver's shop and caused many a premature death amongst Stonehouse folk. 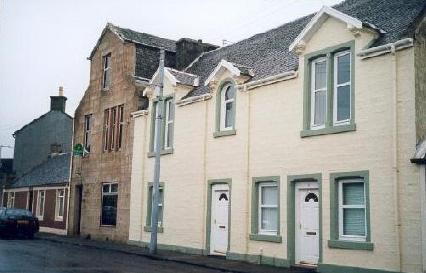 Tam died at his home at No.6 Angle Street, Stonehouse on October 4th 1909 aged 60 years. This is the house where he was born and lived all his life. Cause of death was given as "Chronic Bright's Disease" and his wife Catherine survived him by a further nine years. If possible we would like to make contact with any of his descendants in Lanarkshire or anywhere else... 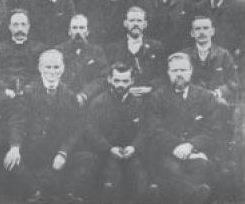 Wee Tam is the small man in the front with the black beard. The photo was taken in 1894 when he was an Elder of the Congregational Church, situated about 50 yards from his house. 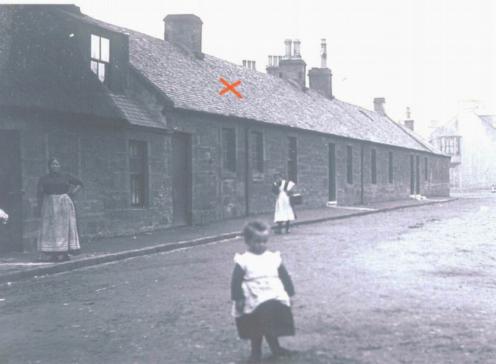 Here is a photo of Wee Tam's house in Angle Street in the early 1900's.

The present owner, Ina Millar is 90 years of age and her brother-in-law Robert Millar married Catherine Sorbie in 1931.

Below you can see Ina pictured in the door of the house in August 2007. She is fully aware and very proud that this was Tom Sorbie's house. 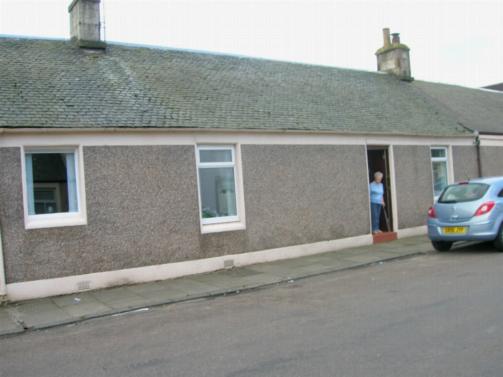