The Family of Thomas Sorbie and Jane Burke

A photograph of this family is featured on the 'Home Page' of this website. Thomas was born in Stonehouse in 1851 and was the eldest son of Mitchell Sorbie, the famous footracer and "Champion of the three Kingdoms". Mitchell died tragically at the age of 31 in a quarry accident at Auchenheath near Lesmahagow, Lanarkshire in October 1856. After his death many Sorbies were named 'Mitchell', very likely in honour of their honoured cousin in what was a very close-knit community. Thomas' mother was Ann Thomson, a direct descendant of James Thomson the "Martyr" who was killed at the Battle of Drumclog in 1679.

Thomas like his father went down the mines along with his brothers Daniel and John. Thomas married Jane Burke on 29th December 1871 at St.Ninian's Church. Jane, a Handloom Weaver, was born in 1853. She was the daughter of James Burke, an immigrant from Killeevan, County Monaghan, Ireland and Jane Barr, a Muslin Sewer who was born and bred in Stonehouse. 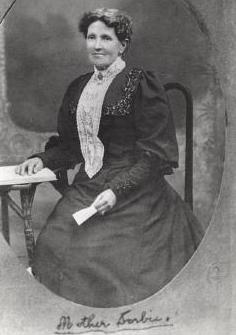 They proceeded to have a large family (common at the time) of six sons and four daughters. Their first child Jane died shortly after her birth in October 1872, then the first of five consecutive sons, Mitchell 1874, was followed by James, Daniel, John and Thomas. A sad event occurred in January 1888 when James tragically died aged 12 of scrofula which is an tubercalosis infection of the lymph nodes in the neck. After the boys came daughters Ann, Jane and Margaret, followed by a final child, William in July 1897. Thomas and Jane had now made their home at 12, Lockhart Street where Tom died in January 1908 and Jane spent her days up until the time of her death in May 1923. 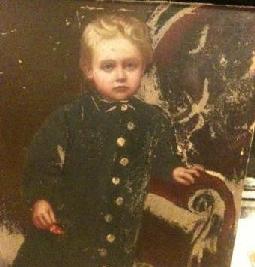 Around 1910 the first of the brothers, John left to work in a mine in Wyoming U.S.A. with a cousin, Bob Wilson. After a dispute with the owner they took their pay and retuned to Stonehouse to plan their next adventure. John and his brother then Tom married two sisters from Linlithgow, near Edinburgh. They were Isabella and Jeanie Brown whose parents Thomas and Margaret Brown are buried in Stonehouse new cemetery.

Their next foray across the Atlantic took them to Gillespie, Illinois where they remained with their new families until the 1920's, when work slowed and they again returned to Lanarkshire. Finally they returned for good to O'Fallon, Illinois when job prospects turned out to be better in the U.S.A. There they joined a number of fellow townsfolk who had already travelled to the area to work in the mining industry. 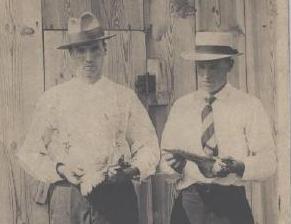 John (left) is seen holding a racing pigeon. His later travels to and from the U.K. were financed by selling young "doos" as they were known in Scotland for military use during WW1.

This was very much the pattern as all five Sorbie brothers finally emigrated to the U.S.A. in the pursuit of steady employment and a better life. The youngest, William or "Willy" was the last to leave, in 1923, shortly after the death of his mother, Jane. Willy later said in an interview. "Mining was all we'd ever known in Scotland. My father said the only way the Sorbies saw the sun was on a Sunday, on the way to church, and my memory is that we didn't often see it then. Like as not it was raining. That's what got me to leave Scotland, after mother died, the rain, and restlessness".

The three sisters remained in the Stonehouse area where their descendants all still live. In February 2001 we met up with Margory Love, the daughter of youngest sister, Margaret, born 1892 and the granddaughter of Tom and Jane who now lives in Larkhall. We were regaled of fascinating and humorous stories about her uncles and their travels in the U.S.A. Margory is just one of the countless "Descendants of Thomas and Jane". 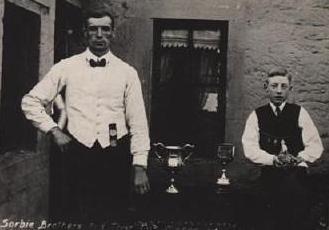 The Sorbie brothers were all very musical, John and Daniel being champion bagpipe players in both Scotland and the U.S.A. In the early 1900's Stonehouse boasted the Pipe Band champions of Scotland and later the World! Brother Tom played the concertina; Willy, the melodian and their cousin, Tom (Danny's son) was known as 'Fiddling Tom'. This talent was also inherited by many of their children and grandchildren and a number have gone on to play in well known bands or be music teachers. Tom also ran 'Sorbies Bar' on 56th Street in Kenosha, which has since been sold and later demolished. 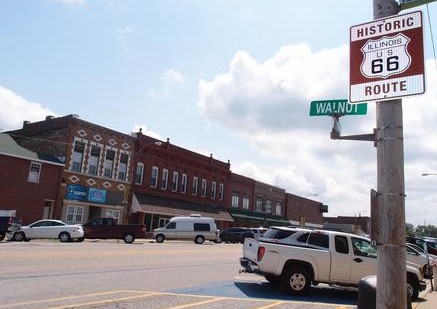 Gillespie, Illinois pictured in August 2016. The destination of many early Sorbie émigrés a century ago.

At the time there were 4 large mines in the town and almost 150 in the whole of Macoupin County.

Sandy Rosengren née Clark is such a descendant and she takes up the story "...Uncle Bill (Willy) had such a sweet tenor voice and could break out in song most any place. The family parties were one big sing-song filled full of jokes. All were always careful to keep it clean because of the little "wee ans" listening, I remember. Everyone would always have their own song that was their trademark. My Grandpa Walter's song was Annie Laurie. "Bottlehouse" Tom Sorbie (Mitchell's son) would sing and act out as if he were playing the trombone, MacNamara's Band. I think Uncle Bill's song was "Oh Danny Boy". My Dad, Grandpa Walter, Uncle Tommy (Fiddlin' Tam) and Uncle Bill would always do Scottish songs as a men's quartet in full 4 part harmony. Not until later on as I studied music in college and became a music teacher did I begin to fully appreciate their great talents as they sang together with no music in front of them and harmonized so perfectly. What a rich heritage to have. It is great memories."

"Our relatives made sure the younger generation learned "the old country's" tunes and my brother, Jim, and I learned the words to "The Road and the Miles to Dundee" and sang it as a duet when it was our turn to perform. I still have the blue piece of stationary that I wrote the words on from my Grandpa singing the words to me so I could learn it..." 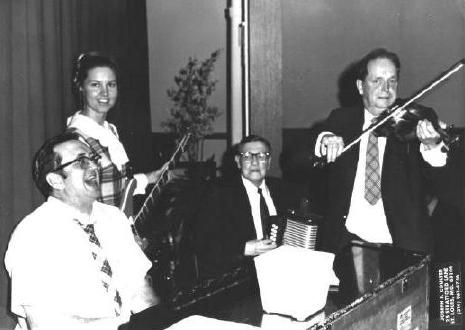 Willy's grandson Tim Healey, now a Professor at Cornell University, New York, remembers the musical family as follows, "I have such incredible memories of my grandfather playing melodeon with his many talented nephews named "Tom" - fiddler or little Tom (son of Dan), Big Tom (son of Mitchell), Tom from Toledo (son of Tom). They and many more of them had such fun when they were together - singing, dancing, joking - they were "party animals" of their day!"

In fact Willy's brother Daniel Sorbie was the pipe major in the Gillespie, Illinois Pipe Band that was hired by a factory owner to greet his son at the station in Kenosha, Wisconsin as he returned home from the war in 1918. The owner, George S. Whyte, a Scotsman himself was so impressed that he offered the whole band jobs in his factory. Danny quickly took up the invitation and moved his family to Kenosha which lay in the neighbouring state. Danny worked in the factory up until the time of his early death in 1937. The 'Kenosha Connection' is a very important one in the tale of the American Sorbies. Daniel's brother Mitchell later settled there and both raised large families. Many years later, in 1974 and 1979 the descendants of the five Sorbie brothers held two successful  Kenosha reunions on the farm of Mitchell's son, Tom. Just recently the tradition was revived with another re-union for all family members in August 2003. 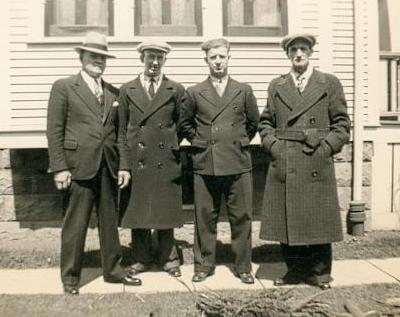 Daniel has many descendants from his four children, although none bear the Sorbie name due to the preponderance of females. The two main branches of the family are the Clark and Langel families. 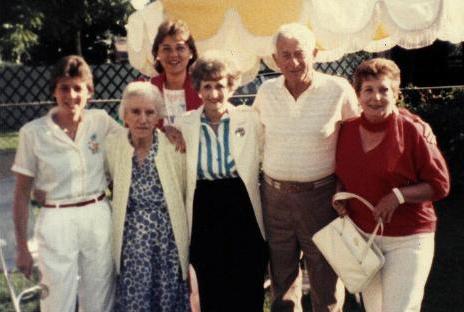 Return to 'The American Connection'