(in the District of Avondale)

Strathaven (pronounced “Stray'ven”) nestles in the valley, or Strath, of the Avon Water, which tumbles eastwards towards Stonehouse and on until it enters the Clyde. It is a charming old town, and contrasts beautifully with the modern architecture of the nearby East Kilbride. It has similar history to Stonehouse with weaving, however as a  good number of merchants made their home in Strathaven, it has always been a more monied town.  It was also the home of numerous Sorbie families, as borne out by the census records.

The spire of the whitewashed East Parish Church is a well known landmark, and one of the first things you see as you approach the town from the high ground to the north. 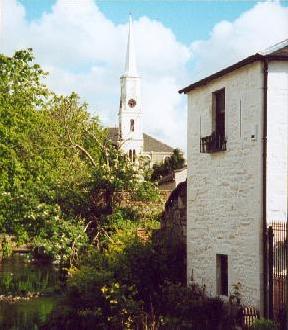 Whitewashed buildings and the East Church, with the Avon Water in the foreground

The town has an ancient origin, and was an important coaching stop in the days when coaches ran from Ayrshire to Edinburgh. The original parish church was built in 1001, but this was pulled down in 1772, when the present one was built. It has a quaint tower topped by a cupola and weather vane, and the clock mechanism was installed in 1902 to replace one that had done its duty for 130 years.

Its focal point is the Common Green (now alas tarred over) where markets were once held, and it is a fascinating mix of old shops, inns and coffee houses. 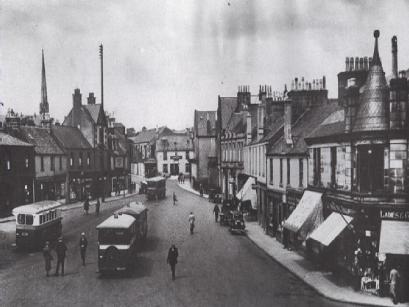 The town in 1637 consisted of little more than a cluster of dwellings, numbering about 48 houses. In 1725 inhabitants mainly consisted mostly of persons who had retired from rural business, very much like today. 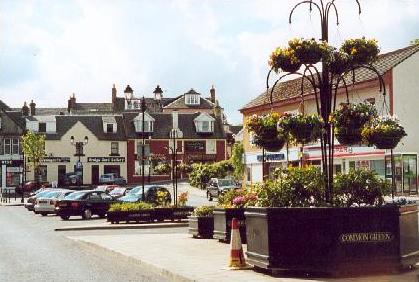 After the Napoleonic wars there was a lot of unrest. Corn Laws drove up the price of food and weavers had a rough time. In 1820 James Purlie Wilson and other Radicals took up weapons and marched to Cathkin but 'Purlie' was arrested and charged with high treason and hung at Glasgow Green. At his trial he uttered the following words when the sentence was passed "My suffering countrymen! I remain under the firm conviction and I die a Martyr in the cause of Truth and Justice, and in the hope that you will soon succeed in the cause which I took up arms to defend".

His body was dug up within a matter of hours and brought back to Strathaven by his family and followers and buried in the old graveyard close to his house. There is a monument in the town to him, which was erected in 1846, with the aid of public subscription. 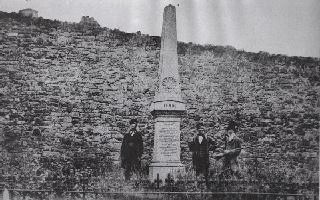 Monument to Purlie Wilson - seen with 3 of his fellow Radicals 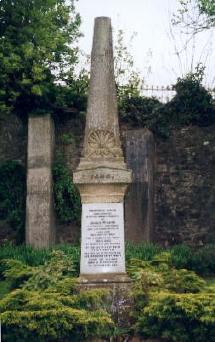 The Monument in the present day 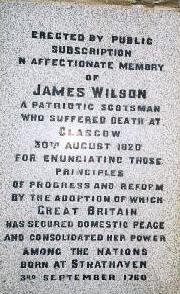 Inscription on the Monument

Perhaps the most striking building in Strathaven are the ruins of Strathaven Castle at Stonehouse Road, above the banks of the Powmillon Burn. The present ruins give little idea of the Castle’s original size. When complete, it had an outer wall with 13 turrets, and an entrance with a drawbridge. 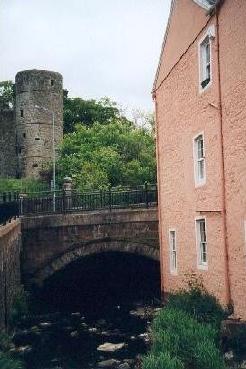 Dating back to the 14th century, Strathaven Castle  had several owners. In the early 1400's, it was owned by the powerful Douglas family. After the suppression of the House of Douglas in 1455, it passed in 1458 to Sir Andrew Stewart, who later become the first Lord Avondale. The 3rd Lord lost it to Sir James Hamilton of Finnart in 1534. In 1611 the castle was sold to James, 2nd Marquis of Hamilton and it remained in that family for three hundred years. In the 1700's it fell into decay.

An interesting story is told on the plaque outside the castle.
According to tradition, the wife of a past lord so greatly displeased her husband that she was walled up alive in part of the Castle wall. Nothing is recorded of her crime, yet it is said that she was led into a small purpose-built niche, blessed by a priest, given some food and water, and then walled up forever. When a portion of the walls fell down in the middle of the 19th Century human bones were discovered, giving some credence to this story.

It is still well worth a visit and is also the site of the 'Strathaven Visitor Centre'.