Stonehouse is one of the smallest of the forty or so Parishes that make up the County Of Lanarkshire. It's location, only 15 miles south of Glasgow places it on the fringes of the biggest urban conurbation in Scotland. Even so it sits on the bank of Avon Water, in gently rolling countryside and still manages to retain it's rural character.

The heart of the town remains largely unchanged from the 19th century with the low, one-storey weaver's cottages very much in evidence. These are the houses that the Sorbies lived and worked in, described so eloquently in Tom Sorbie's 'Short Histories of Stonehouse' as featured on this website. This has now been classed as a "Heritage Conservation Area". 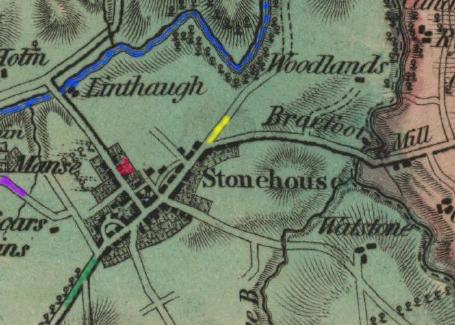 A map from 1816, showing the town's close proximity to the Avon Water (Blue Colour).

Green - to Strathaven and the West Coast.  Yellow - to Larkhall, Glasgow and to branch off for Edinburgh. Purple - to the old St.Ninian's Kirkyard. Red - Location for Sorbie Gathering 2003.

In a letter he wrote in the early 1960's, John Summers, a Sorbie descendant who emigrated to the U.S.A. in 1903 said the following of the local families, "In Stonehouse which is in the lowlands, there was no railroad so with a population of about two thousand they did marry among themselves. You had to watch out what you said because they were mostly all related; Shearers, Sorbies, Wilsons, Thomsons, Hamiltons and Curries.." 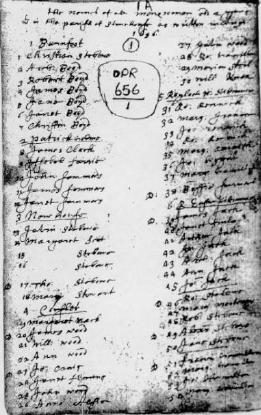 The names of all "monessman", old and young in Stonehouse parish - August 1696.

872 were living within the parish, 272 in the village itself.

The only Sorbies resident at this time were James Sorbie and his wife Euphemia Farrie and their 2 year old son James. It is believed they are the ancestors of nearly all living Sorbies.

(From the "Scottish Gazetteer", published 1885)

"Stonehouse, a town and a Parish in the Middle Ward of Lanarkshire. The town, which lies 450 ft above sea-level, near the right bank of Avon Water, by road 3 3/4 miles ENE of Strathaven and 7 1/4 SSE of Hamilton, whilst its station, on a branch-line of the Caledonian, is 3 1/4 miles of Ayr Road junction and 18 1/4 SE of Glasgow. Mostly a growth of the last half century; it is a fine airy, thriving place; and has long been kept in a neat cleanly condition.

It comprises a main street extending seven furlongs SW along the highroad from Edinburgh to Ayr, two new streets built on a specified plan, and some small lanes or subordinate parts. Its houses, 50 years ago, were mostly of one storey and generally thatched; but now, not a few are substantial, well-built and slated, two-storied structures. The town's rapid advances, both in character and population, arose from the liberal encouragement given to feuars and builders by the late Robert Lockhart Esq., of Castlehill.

A large portion of the inhabitants are miners, weavers and tradesmen. Stonehouse has a post office, with money order, savings bank and telegraph departments, a branch of the Union Bank, 9 insurance agencies, a gas company a public library, and fairs on the last Wednesdays of May, June and November."

Another little known fact is that in the early 1900's Stonehouse was home to one of the most famous pipe bands in Scotland. In fact in 1909 they became World Champions no less. For more information on this fascinating story on how a small village became the talk of the musical world click on 'Champion Pipers'. 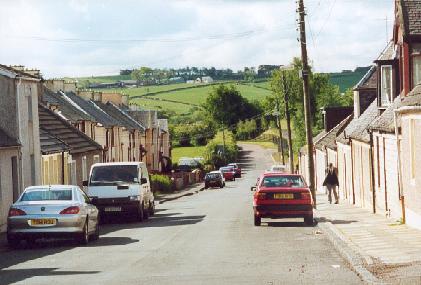 On the fringes of the Stonehouse lie the more modern housing schemes along with the hospital which serves the local area. However the population has only grown from 3500 in 1900 to almost 6000 in the present day. In 1973, a plan was proposed to turn Stonehouse into a "New Town" receiving a population of 35,000 from Glasgow, with the likelihood of an increase to 70,000. This was instigated due to the poor living conditions in urbanised Glasgow.

However the plan was reviewed in 1977 and abandoned due to a change of policy by the Government. Many had been in favour of the proposal due to the proposed influx of industry and investment, however others feared the threat to Stonehouse's thriving, close-knit community. John R.Young's book "Wha's like us?" describes one of the main attractions of the town as "it's community spirit and character where every face is familiar and news travels fast". The New Town would have certainly threatened this community togetherness.

Looking up Trongate (towards Paterson Church) from The Cross around 1950.

However the advances of the modern age do have some benefits. This has come in the shape of the Stonehouse by-pass which was opened in the mid 1990's and skirts the town along the route of the old railway line. It has greatly relieved the rumble of heavy traffic through the town and has restored a sense of normality about the place. The by-pass runs between the town and St.Ninians old Kirkyard (Churchyard) which lies half a mile away. This tranquil place is steeped in history and an essential excursion for any visitor. 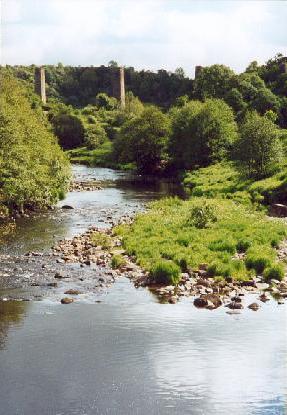 Avon Water, the view from Linthaugh Bridge - looking towards the columns of the old viaduct. Formerly the longest in Scotland, it was built in 1904 and dismantled in 1984.

Stonehouse is constantly under the threat of suburban development in what is an area of outstanding natural beauty. The peaceful River Avon however, represents an escape on the doorstep of its inhabitants. It flows through the Parish on the way from its source in Ayrshire to it's confluence with the Clyde, one mile east of Hamilton. It has often proven to be an inspiration for local painters and poets and is renowned as one of the best trout fishing streams in Scotland. 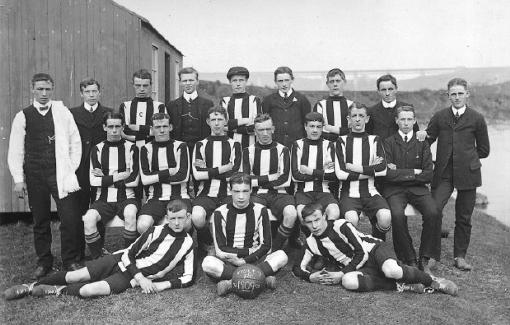 "Stonehouse Violet" Football team had their home pitch on the banks of the Avon.

They are pictured here in 1909 with the viaduct in the far distance.

The Avon itself has many tributaries, including Kype and Cander Waters which flow from  the towns of Sandford and Lesmahagow respectively. The Cander is spanned by Woodlands Bridge, built in 1827 by engineer Thomas Telford when the Edinburgh to Ayr turnpike road was first established. This bridge was very narrow with a sharp bend just as you came to it. Locals called it the 'Bridge of Sighs', as it was a terrible sight looking down the gorge from the top deck of a bus, leading to many a sigh of relief when safely negotiated. 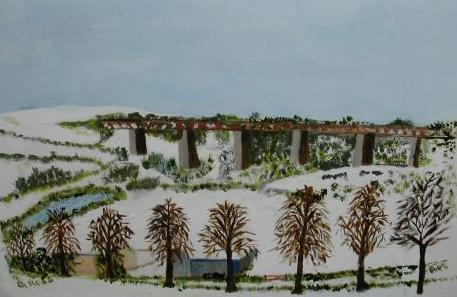 The Avon and Cander have both cut steep-sided gorges where rocks overhang and large boulders litter the river bed. Together they have been awarded European status, named as one of only fourteen sites of 'extra special scientific interest' in Scotland.

"There's mony rivers in the west
Ayr and Doon and a' the rest
But nane tae us is hawf say blest
As oor sweet winding Avon".

Acknowledgement to John R.Young. Extracts used from his book "Wha's like us?".

For a more detailed history of Stonehouse please refer to the Stonehouse Heritage Group website: www.stonehouseheritage.co.uk

Return to 'Origins of the Name'