'Ceilidh' - dictionary definition : "A celtic word (pronounced - kaylee), a special event at which people dance to traditional music, especially in Scotland and Ireland." Basically this is a social dance gathering - a party to most people!

The village of Sorbie in Wigtownshire decided to hold a 'Midsummer Ceilidh'  this year to raise funds for the village hall which is in need of repair. Members of the Sorbie family had recently made contact with village members and were invited along to the event as a means of strengthening ties. A natural time to do this was on July 17th when the long-awaited ceilidh had been arranged. 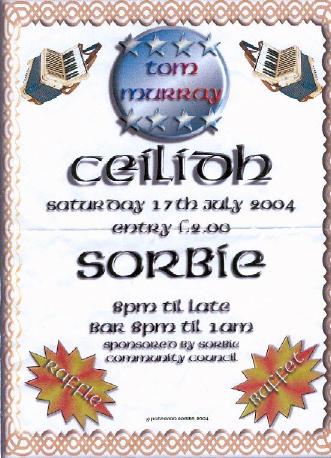 A poster for the Ceilidh evening

On the day your web editor Andy Potts met up with Tom Sorbie who is now living in London, but originates from Motherwell, Lanarkshire. A pleasant afternoon was spent touring around the peaceful and beautiful Wigtownshire countryside of South West Scotland. Places visited included Whithorn, 4 miles south of Sorbie, which is known as the seat of Christianity in Scotland and which was by the 10th century a thriving Norse settlement and this supports the view of Sorbie being a Viking name.

This was rounded off with a visit to the magnificent Sorbie Tower which lies just outside the village. Tom was seeing the structure for the first time and was impressed with what a large, strong building it was. A dramatic sight indeed. 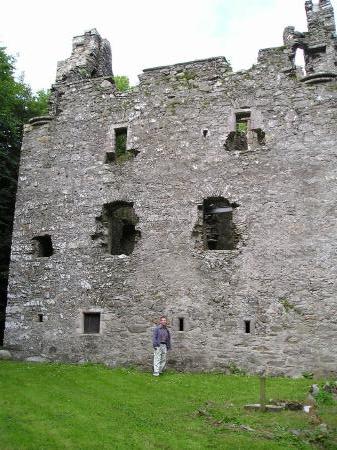 At 8.00pm prompt the ceilidh got underway in the village hall with all ages taking part. Similar to an American barn dance, the band - called 'Tom Murray' played a selection of traditional tunes such as the 'Gay Gordons' and the 'Dashing White Sergeant'. There is a very strong culture in ceilidhs that anyone can ask anyone to dance. So either ask a random person, or stand around looking slightly lost at the beginning of a dance, and you will probably get asked to dance anyway! 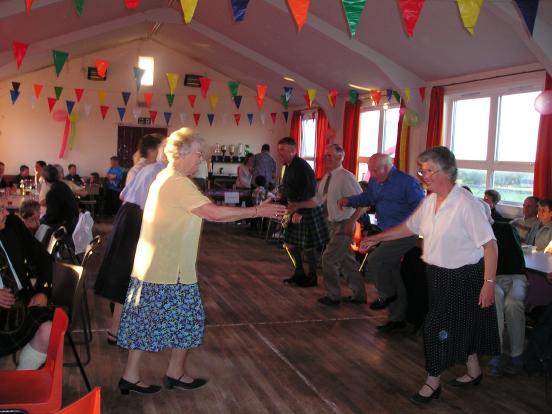 The ceilidh in full swing

A member of the band known as a 'caller' enticed people onto the floor then taught them the simple 'moves' they need to do for the next dance. The dances were so well explained that anyone can do it, the caller even keeps calling the moves after the music has started to help you along as you dance. No-one was excluded, everyone joined in the fun and no-one worried if they made mistakes. 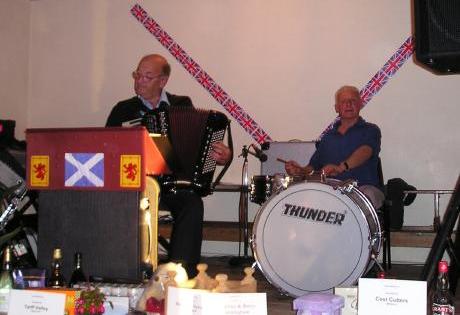 Andy and Tom were surprised to learn that they had been made guests of honour when they arrived at the hall.  They were greeted by Andree Davies, the Secretary of the Sorbie Steering Group Committee. She explained that the residents of Sorbie were a mixture of people who were born and raised locally and 'incomers' who had settled in the area. However all had created a strong community spirit and events such as this served to bring the villagers even closer together. 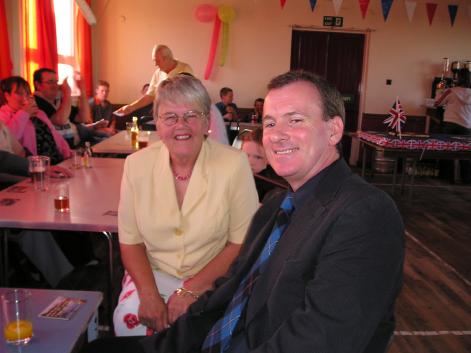 Tom Sorbie and Andree Davies. Happy to meet you!

Midway through the evening Andy and Tom were called to the front of the hall and were introduced to the gathering by Ian Thompson the Master of Ceremonies who also happens to be the village Policeman! Andy then gave a short speech describing the work that the Sorbie 'Clan' had been carrying out (including the new Sorbie tartan) and how we were keen to forge links with the area from which we originated. He described how it was thought that the family took their name from the area and not vice-versa.  Andy concluded by thanking the villagers for their hospitality and hoped that more family members would attend next year's event. 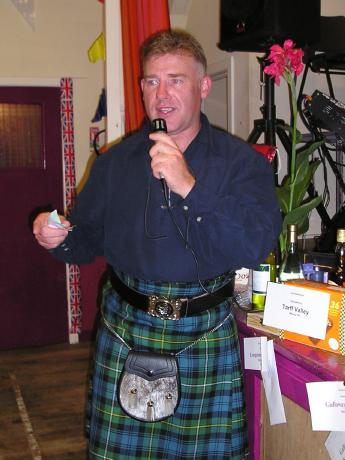 Ian Thompson - your 'M.C.' for the evening

After an excellent buffet meal, Andy and Tom were asked to draw the raffle as 'Guests of Honour'. An impressive array of prizes were on offer, kindly donated by local businesses. These were:

In total £260 was raised - an excellent return for a small rural community which totals only around 40-50 households. 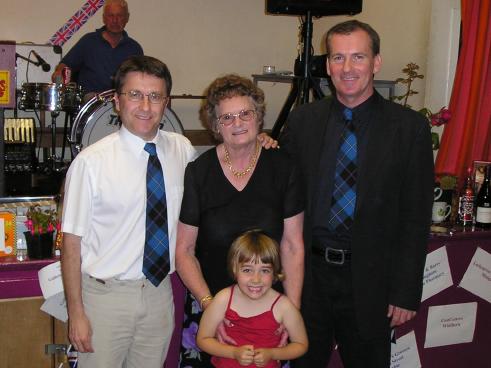 Andy and Tom sporting their Sorbie tartan ties, along with Helen Gibson, Treasurer of the Sorbie Committee along with Andy's daughter Vhairi.

Younger members of the community joined in the party too with plenty of dances for the kids. A great night was had by all in what was a very successful evening. In total the ceildh was attended by 150 people and the festivities carried on until well after midnight. Next year year more Sorbie 'clan' members hope to attend and build on the friendships forged with the village that shares our name. Thanks again to all the local community who made us feel so welcome. 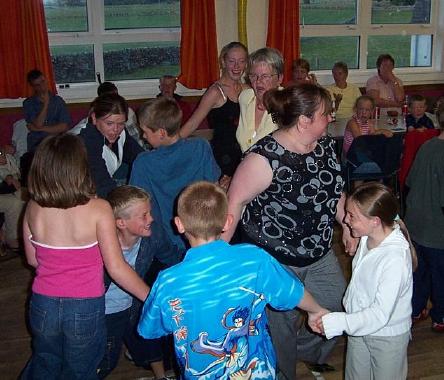 Ceilidh - fun for all ages 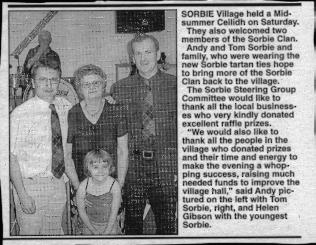