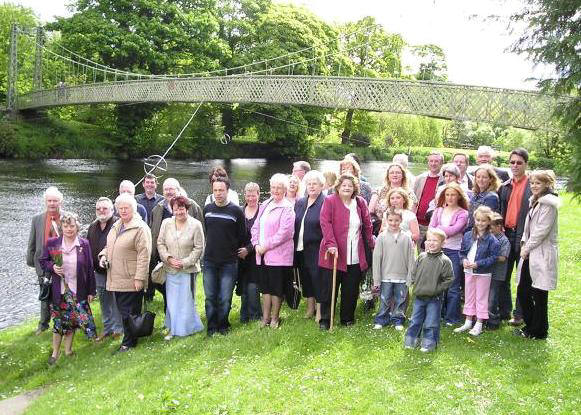 Members of the family gather to pay their respects to Ron.

On the last Sunday of May 2005, nearly 40 members of the 'Newton Stewart' branch of the Sorbie family came together on the banks of the River Cree in South West Scotland to pay their respects to Ronald Murray Sorbie. Ron died in March the previous year aged 95 in Luton and Dunstable Hospital, Bedfordshire, England after spending his final years in a local care home.

Prior to this he was widely regarded as the oldest living Sorbie.  Please see the bottom of this page for a full synopsis of his life.

Born in Newton Stewart, Wigtownshire in 1908, the third eldest child of John and Isabella Sorbie, Ron was the last of his generation and an enormously respected family member. It was his lifelong wish that his ashes should be scattered where he spent so many enjoyable boyhood years. All his relatives were happy to oblige and Sorbies of all ages gathered to say their final goodbyes on a special day in Galloway. 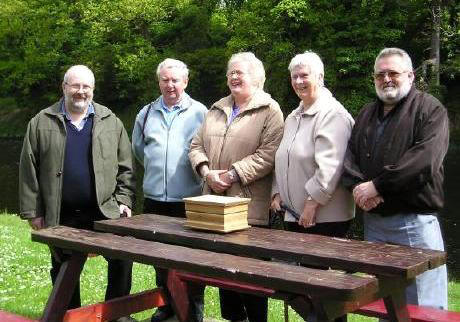 Over the years Ron, along with his 9 brothers and sisters became scattered all over the U.K. So family members made the trip to South West Scotland from places as diverse as London, Hertfordshire, Northumberland, Glasgow, Ayrshire, Worcester, Barrow and Grimsby. A number of those present had not seen each other for many years, so family bonds were being rediscovered and reignited. It was a testament of the fondness they felt for Ron that they had travelled so far.

It had been a stormy week, but when the Sorbies made their way down the river walk close to the King George V suspension bridge all was peaceful. The beauty spot was close to were Ron grew up in the town at King Street, later Arthur Street. It was also just around the corner to Douglas Terrace where his parents retired in 1934 and his father John Dalrymple Sorbie lived until his death in 1966. John was a successful Pattern Designer at the nearby 'Cree Mills' factory which now stands as a derelict monument to the town's proud weaving history. 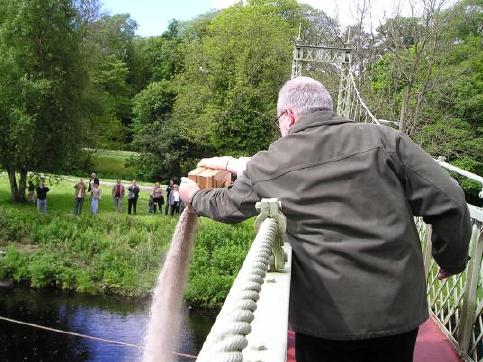 The scattering of the ashes.

Ronald's only son Ian and two of his daughters, Joyce and Ruth performed the actual ceremony as the ashes were scattered along with wreathes of flowers from the centre of the suspension bridge into the waters of the silvery Cree. It was a perfect send-off on a tranquil spring day in a place where Ron spent many happy times. He was surely smiling down on the proceedings and the dignity in which it was carried out.

Following this tribute, the clan moved onto the Newton Stewart Museum, a privately funded establishment stuffed choc-a-bloc with items of local and historical interest including bicycles, animal skins, military uniforms, Victorian photographs and even an original Covenaters headstone dating from 1685. And that was just in the entrance hall!! 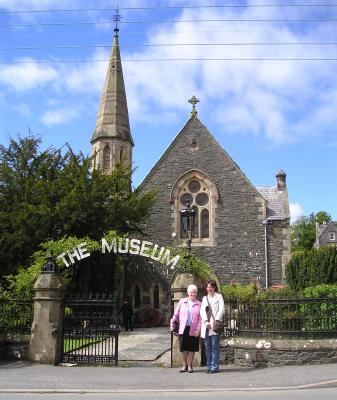 Ishbel Skilling née Sorbie and daughter Lorna outside the museum.

The Curator Jim McLay opened up especially for the visitors and of greatest interest was a display of John Sorbie's notebooks and textile designs. Jim explained: “The family viewed the collection we have of John Sorbie's pattern books and dye books from the time he was designer at the Cree Mills. It's very nice that they have kept in touch with the town like that". The books were remarkably well preserved and it was satisfying to see they were being retained for the benefit of townsfolk (and Sorbies) who could view them in fitting surroundings. They were obviously well cared for and greatly treasured.

The family was also able to see an inscribed board from Penninghame Primary School, upon which the names of two of Ron's siblings, Elizabeth and Kenneth were honoured as two of the school’s 'dux' award winners. These were presented in the years 1924 and 1929. 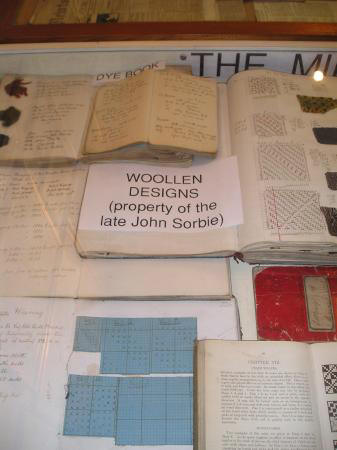 After a look around the Museum, the Sorbie clan retired to the 'Galloway Arms' hotel for a buffet meal where they recounted tales of Ron and times gone by. It was an extremely successful day and the first of hopefully many family get-togethers in the future for the reformed Newton Stewart Sorbies. 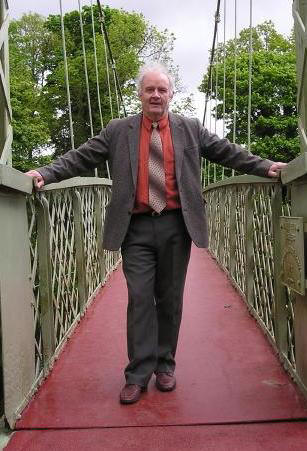 Organiser for the day was Bill Dougan, originally from Stranraer, just up the road from Newton Stewart, but now living in Hatfield, Hertfordshire, England.

Bill's mother was Ron's sister, Jane Bell Sorbie, who married William Dougan in 1933 and settled in Stranraer. Bill has been very active in tracing the many descendants of John and Isabella Sorbie and bringing them all together. This, despite being scattered to all four corners of the United Kingdom. At the moment this is believed to be 30 grand children and 64 great grandchildren!

Without Bill it would have been easy for families to forget their common ancestors, especially ones born over 125 years ago. However the success of the Newton Stewart get-together showed that this Sorbie family, like many others do not want to drift apart are keen to hang onto their shared history.

The life of Ronald Murray Sorbie

who married 20th September 1904 at The Manse, Penninghame, Wigtownshire. 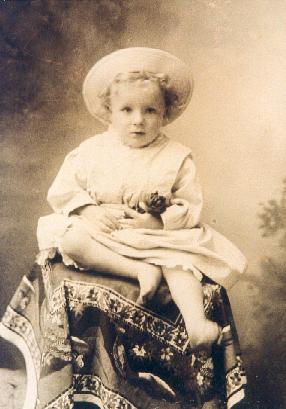 Ronald was born and raised in Newton Stewart, Scotland and seems to have started work very early as this job reference shows:

"I the undersigned certify that Ronald Sorbie worked for me from his eleventh year of age.

Always honest, respectful, diligent during the whole time he was in my employment" 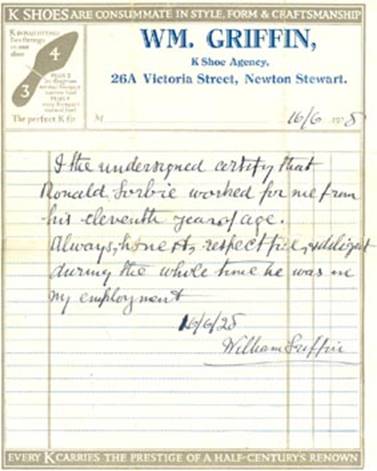 Around this time that Ron left Newton Stewart and went off to London which was a huge step to take at the time.

He would have been aged only 18.

Ron continued to work in the shoe trade until at least February 1932. At this time he gained another excellent reference from "I.H. Levison - Boot and Shoe Specialist - 101, High Street, Camden Town, London NW1." 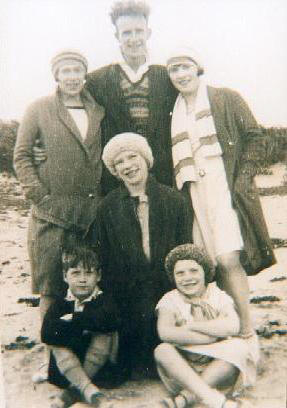 The Newton Stewart Sorbies - at Mossyard Beach – a favourite swimming place circa 1930.

It seems that Ron and Muriel moved out of London to Wheathampstead, Hertfordshire after their wedding in July 1934. 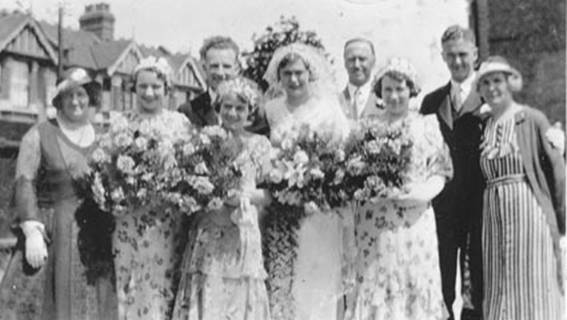 Ron went to work for “Helmets” as a storeman. He was always sporty and played in the firm’s soccer team. 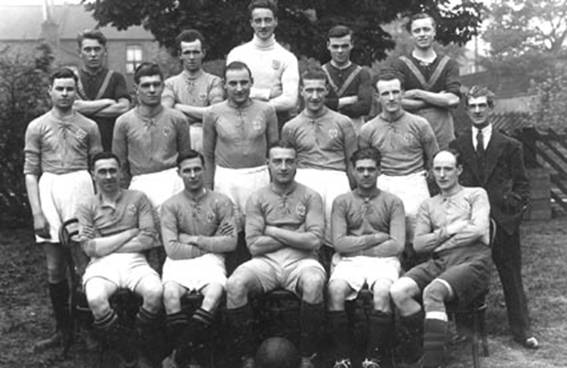 Ron is the player on the right of the middle row.

In 1940 Ron was called up for war service and was in the Royal Army Service Corps.

He served in North Africa and Italy. 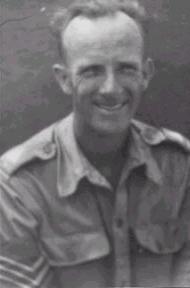 Ronald went back to being a storeman after the war and he carried on working until he was 75 years old.

He liked writing poems and often scribbled little doggerels about the family.

But this poem shows his sadness at the loss of family members. 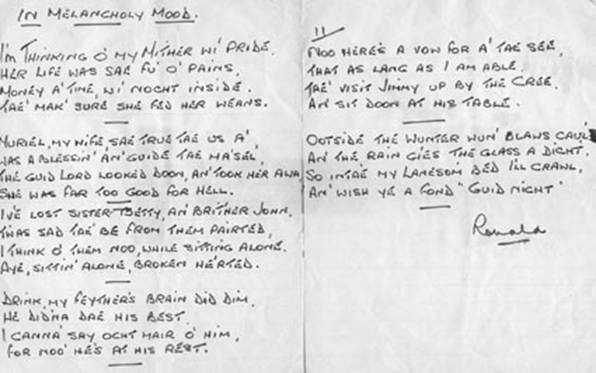 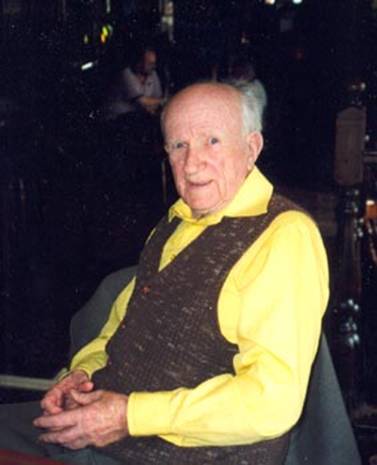 I wandered down to the River Cree,

Where as a boy I loved to be.

I see it wired against erosion

By floods impatient to reach the ocean.

To cross it now is my intention.

I pass the stones over those departed,

As all must end once life is started.

On my left, there is the manse,

Hardly worth a second glance.

I then reach where the Kirkland farm

Here is one of our beauty spots,

And brings to mind the Queen of Scots.

But now the view I appreciated,

By bricks and mortar is violated.

I’ll not venture in for fear of reproaches,

But keep to the road once used by stagecoaches.

Up to the Park where roam the wild deer.

I can’t see them now they seldom come near.

On up the road that divides into two,

A stranger would wonder the best thing to do.

The one on the left is only a track,

By choosing that you would have to come back.

I’ll take the Risk Road, the one on the right,

And enjoy the long walk-if it takes me all night.

Inside a wee cottage, now falling to ruin,

I see an old tramp, his tea he is brewin’

He ne’er said a word, just gave me a nod.

I turn to the right, towards the A75,

And thankful am I that I’m still alive.

Don’t use your car I’d say to the tourist,

You’ll enjoy a good walk and the air is the purest.

BUT don’t hang about, especially near bridges,

You’ll be nibbled alive by millions of midges.

Bill Dougan of Hertfordshire for the invaluable family information and numerous photographs provided.