The Paisley Branch of the Sorbie Family

John Sorbie was born in Lanarkshire circa 1793. It is thought that John's parents were Gavin Sorbie and Agnes McMillan who were married in Stonehouse on December 1778, although this has yet to be proved. John became a carpenter and on July 12th 1818, he married Grizel Muir in Lanark, the County Town of Lanarkshire. Grizel was the eldest child of William Muir and Janet Paul who were married in Lanark in July 1799.

John and Grizel had at least five children, probably more. The first of which was Gavin, born in May 1819 in Lanark. John their youngest, was born in 1835 and became a shoemaker. On New Year's Eve 1855 he married Isabella Murray at the Congregational Church, New Lanark. Isabella was a spinner and was the daughter of Thomas Murray and Christina Whitfield.

Their 2nd son, John, born in New Lanark in 1857, was the Great Grandfather of Trevor Sorbie, the well-known hairdresser; born in Paisley in 1949, now based in London. Trevor's father Robert, born in 1919 followed in the footsteps of his father John, born in August 1888 who founded the family hairdressing business.

After having their first four children in Lanark, John and Isabella moved to Paisley around 1860. Paisley is located in the County of Renfrewshire, on the Clyde Estuary, just to the West of Glasgow. Altogether they had 13 children between 1856 and 1874, 10 of whom survived.

Research shows there were already Sorbies living in Paisley in the early 1800’s. It is likely that some family members moved from Stonehouse to Paisley in order to find employment. As many of them had been involved in the weaving trade, their skills would have proved useful in the town of Paisley, which at this time was rapidly expanding, notably in the manufacturing of cotton and silk threads. As a result of the Industrial Revolution, two large mills opened in the town. These were Clarks Mills and Coats Mills which were established as early as 1812. 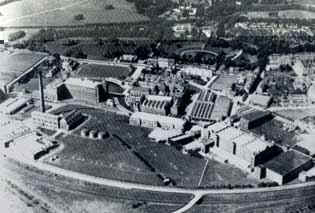 An aerial view of the Paisley Mills

The textile industry had already become more important in the seventeenth century. A census taken for tax purposes in 1695 showed that the weavers already formed the largest group of tradesmen. Paisley already had a thriving weaving tradition. Their products during the following century were lawns, silks and muslins, and the skills gained in the working of these fabrics laid the foundations for the intricate work required in Paisley's most famous nineteenth century product, the Paisley shawl. This growth created job opportunities in a variety of areas and no doubt some family members from Stonehouse and other areas saw this as an opportunity of securing a better life-style.

John and Isabella's 5th child, Gavin, was born in Paisley in 1861. The 1881 Census shows the family living at 6, Stevenson Street, Paisley. Gavin is recorded as being a coachman/driver and he married Maggie Sunter, a mill worker in November 1884 . They then had 7 children between 1885 and 1899. Their two youngest sons, Gavin (below left) born in December 1893 and William in February 1898, married two sisters.

Gavin and Jane are pictured below left and Jane Stevenson Wilson below right.

During the years of the second world war, Jane was called to work and was employed as a wages clerkess in  William Fulton & Sons, in Paisley. This company dyed and finished cloth, some of which was made locally.

Gavin and Jane had one son, also called Gavin, who was born on November 18th, 1921 at 30, McKerrell Street, Paisley. 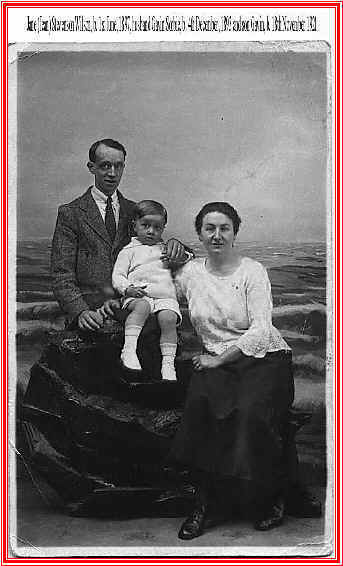 Gavin senior served his apprenticeship at the Renfrew firm of Babcock Engineering. He was an iron driller/boilermaker. He was also very ‘green fingered’ and, in addition to looking after the garden of the tenement block in which the family lived, he also had an allotment which he lovingly tended.

Gavin junior, as an only son, was offered the opportunity of full education. He attended the John Neilson Institution, Paisley from the age of 5 and left after gaining his "Highers" (Scottish academic qualifications).

After leaving school, Gavin attended college in Glasgow before joining the Civil Service.  For many years he worked for the Ministry of Labour. Latterly, before transferring to the Health & Safety Executive, he was manager of the Department of Employment’s Clydebank Office.

During the war, he joined the R.A.F. and was posted in North Africa . 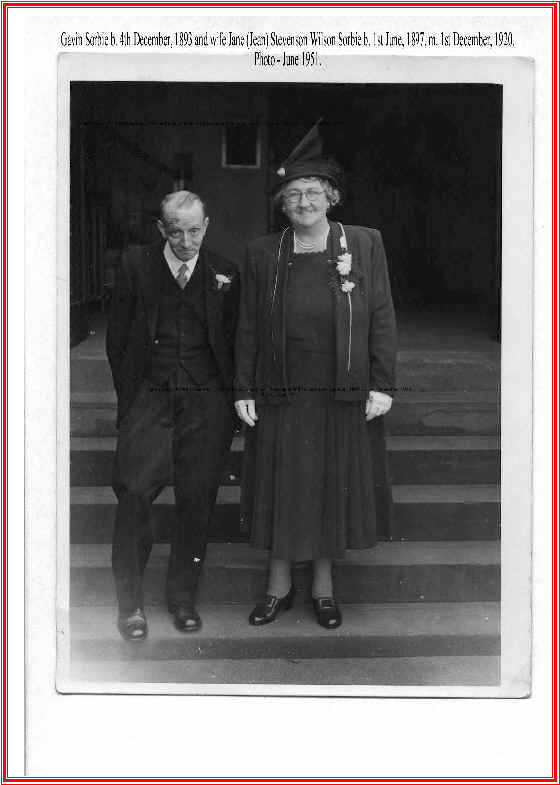 Jane had spotted a prospective daughter-in-law, and had ‘arranged’ a meeting with her son and Sarah Fergus Orr (known as 'Sadie'), who was a young clerkess working in her office. A coach trip outing to Oban on Scotland's west coast brought the two together and as they say, ‘the rest is history’!! 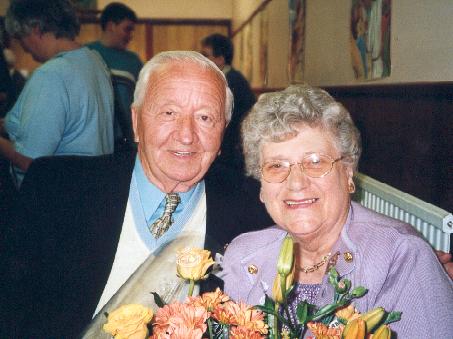 They celebrated their Golden Wedding Anniversary on the day of the 'Sorbie Family Re-union' in Stonehouse 2nd June 2001.

Gavin passed away in June 2006 in his home town, Paisley in his 85th year. He was a great friend to the Sorbie worldwide family and made the closing speech at our first U.K. gathering in 2001. Gavin will be sadly missed by all. 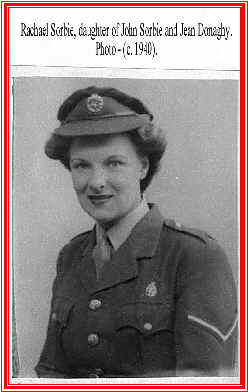 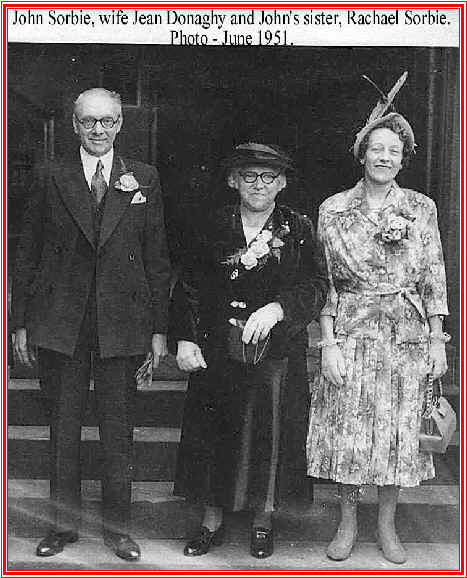 The picture, above left, shows John Sorbie, his wife Jean and his sister Rachael.

John was the brother of Gavin and William, the son of Gavin Sorbie and Maggie Sunter. He was born in Paisley in 1886 and married Jean Donochy in 1911 in the Wesleyan Methodist Church.

The picture above right c. 1943, is of Rachael, daughter of John.

Rachael married James Johnston, who was the Registrar of births, marriages and deaths in Paisley. They had two sons, John and Gavin.

William Sorbie, brother of Gavin, John and Rachael was born in February 1898 and married Margaret Stewart Wilson (sister of Jane) in 1929. He worked as a water inspector. They had no children. Like his brother Gavin, William was also a keen gardener . He was extremely generous and nothing was ever too much trouble for him. He was always willing to help out those in need. William died in Paisley in 1972 and Margaret in 1981.

Sadie is shown above with Elinor and Gavin in 1956.

Sad to say that only Gavin, Sadie and Lesley still remain in the Paisley area.

The photograph above right shows Elinor, Peter and daughter Laura Anne Sargent, who was born at Paisley Maternity Hospital, on 3rd November, 1987.

Laura was almost two years old when the family moved to England, due to Peter's work commitments.

Peter and Elinor Sargent pictured in 1990

Elinor's younger sister Lesley now lives in Glasgow with her partner, Graeme Muir, pictured above right. They both work for a staff recruitment agency. Lesley Sorbie is shown on both photos with Laura Sargent, daughter of Elinor and Peter.

Gavin Sorbie, Elinor and Lesley's brother married Adele McGibbon, at the Busby Hotel, Glasgow on 27th July, 1977. Gavin and Adele met while studying for their degrees at Strathclyde University, Glasgow. 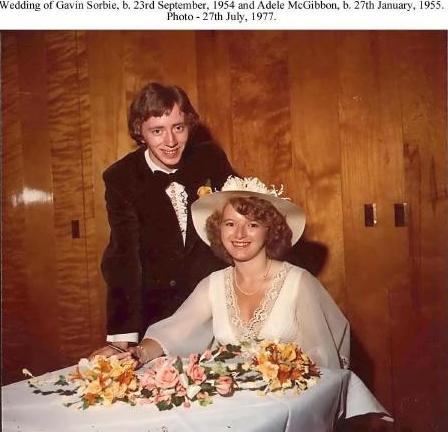 They moved south immediately after graduating and now live in Southampton, Hampshire, England. Gavin works in the pharmaceutical industry and Adele is a secondary school teacher.

They have two children, Duncan Gavin John Sorbie, born in 1992 and Claudia Adele Sorbie in 1994 (both pictured below left with proud dad Gavin).