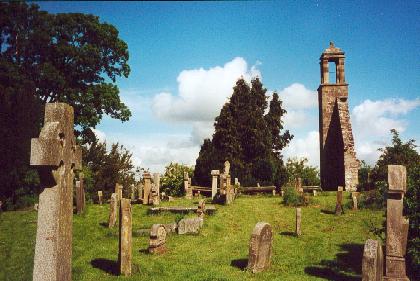 This is probably the earliest place of burial in the parish, containing over 400 visible headstones. The old kirk was dedicated to St.Ninian in the 9th century, though earlier timber built churches may have been present on this site. All that remains toady is the gable end of a pre-reformation church and it's bell tower . We know it dates from this time, because when restoration work took place in 1734 to replace the foundation stone, it was found to be prior to 1560.

The church probably fell into disrepair in the latter half of the seventeenth century and a new church was opened in New Street in 1772 in the centre of the village. The new larger building was situated adjacent to Stonehouse Cross which saved a long walk for worshippers and was used until the present Parish church was erected in 1897. The 1772 church was used as an industrial premises until recently when the site was cleared for housing. 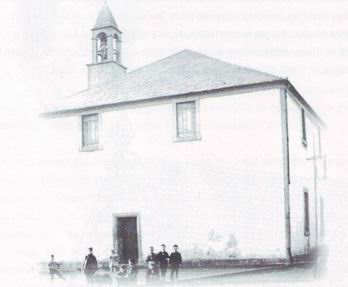 In 1996, £13,000 was allocated by the local Planning Department to repair the deteriorating bell tower of the old kirk. The old ruins had been classified as a 'B' listed monument, along with the graveyard in 1971.At the tower it was in a poor condition and represented a potential safety threat. The work was carried out using traditional materials to complement the original structure. The old kirk is without doubt the most recognisable historic site in Stonehouse and must be preserved.

One of the memorials here is to a martyr of the Battle of Drumclog, covenanter James Thomson of Tanhill. He was killed by Bloody Graham of Claverhouse during the skirmish in 1679. This memorial stone is known locally as the Bloodstone or 'Bloodstane'. This comes from the myth that if you insert your finger into the skull's mouth on the memorial, it would run with blood when you withdraw your finger. The Bloodstone superstition can be explained by the red ochre seam that runs through the grey sandstone, but that doesn't stop many a schoolchild being scared out of his wits. 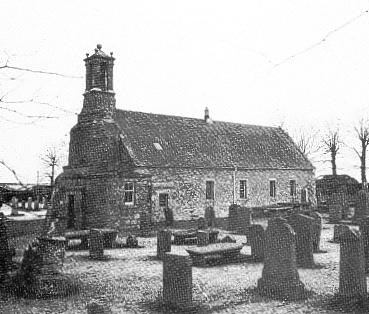 The old Kirk at Pettinain, Lanarkshire gives an idea of what St.Ninian's originally looked like.

The view that the kirk still today commands is one of the most beautiful in the Avon valley. The Stonehouse Heritage Group have carried out important work recently, raising and cleaning many of the stones which had been pushed over and neglected.

St.Ninian to whom the kirk is dedicated was the first person to preach the Christian religion in Scotland. Ninian, who was of the race of the Britons, was born about the year A.D. 350. After studying in Rome, which was by now a Christian and not a pagan city, he returned to make his home near the town of Whithorn in Wigtownshire. His original priory named 'Candida Casa' (Latin for White House) remains there to this day. The rest of his life Ninian spent in teaching the gospel to the people of Scotland, to the south of the River Forth.

In different parts of the country there are wells, to which sick people were taken because they thought that Ninian had blessed the water and there are still a number of churches, like Stonehouse that bear his name. 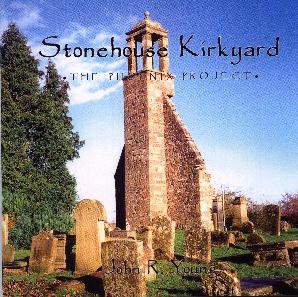 In January 2002, Stonehouse historian and friend to the Sorbies, John R.Young launched his 3rd book, the cover of which is shown above. It gives an in-depth review of St.Ninian's and wishes to make local people aware of it's great historical significance. John hopes it will give young people a better understanding and appreciation of the cemetery's heritage value to the local community. This project is still ongoing and stones are being lifted, cleaned up and refixed all the time. The kirkyard is certainly an impressive, but equally tranquil and uplifting location that is a credit to the town.

For a more detailed history and background to St.Ninian's Kirkyard please click on the following Church website: 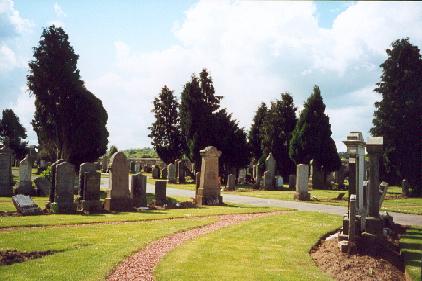 The new cemetery, only a few yards from the old kirk, was opened around 1907 and contains 554 plots or 'lairs' as they are known in Scotland. It is arranged around a central circular feature containing the Cenotaph dedicated to the men of Stonehouse who died in the two World Wars. Two Sorbies, John and Mitchell who died within two weeks of each other in Flanders, Belgium in 1915 are commemorated on the War Memorial.  The cemetery is a peaceful and extremely well kept place and is well worth a visit. The number of headstones bearing the 'Sorbie' name is clear evidence that it was one of the most common surnames in the town.

Acknowledgement to John R.Young. Extracts used from his book "Wha's like us?".

Return to 'Parish of Stonehouse, Lanarkshire'