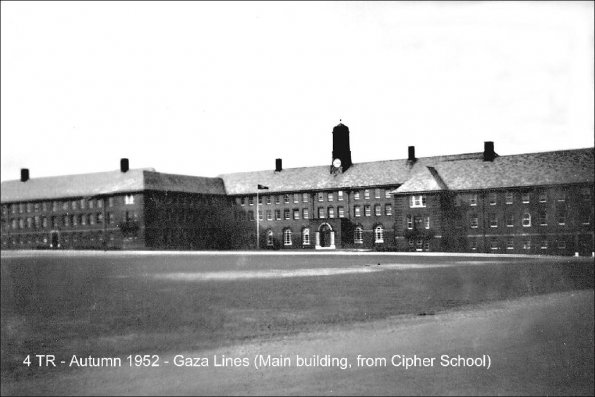 Having had my National Service medical in Glasgow, I was asked to fill in a form, which indicated a preference on any Regiment, Corp, etc.
Being a very keen Short Wave Listener and expecting to get an Amateur Radio Transmitting Licence as soon as I sat the Amateur Radio Examination, I put down my preference as The Royal Corp of Signals.

In July 1955 I received my Call Up papers advising me that I was to make my way to Royal Signals, Aisne Lines, Catterick Camp, Yorkshire, via Richmond Railway Station. Before leaving my Building trade job, an old work mate advised me that what ever is given as a meal on arriving in the Camp, eat it no matter what it looks or tastes like as it would put a lining on my stomach for the rest of the service - how true his words were!

Me out in the back garden just before I was called up.

Leaving from St Enoch's Railway Station Glasgow I met up with a few young men from Glasgow who were heading for the same Camp. After settling down in the carriage the first thing my companions did was to pull out the vertical sliding window in the carriage door to use it as a card table. I thought "Glasgow, Hard Men" - now they would be called anti social vandals. The army soon changed their attitude. We travelled through Darlington and eventually arrived at Richmond Railway Station to be herded into the back of trucks to take us to the allocated Camp, in my case Aisne Lines. In the truck were all types, including Teddy Boys. By the end of the day the Teds had lost their well-groomed hair and my mop of hair had gone, I felt like I had lost a good friend.

The old work mate was right. The potatoes were black but I do not remember what else was on the plate. However I ate it. 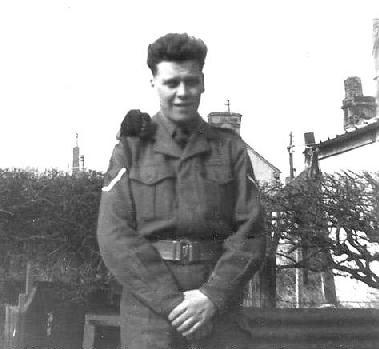 We were in a large Sandhurst Block type barracks which was fairly modern. Early morning the NCOs' bawling and shouting to get us out of bed. We washed shaved and went straight out on to parade. The big problem in the morning was insufficient wash basins for as all. For the next four weeks we tumbled out of bed to be shouted and roared at.

I wondered if I had made a mistake in choosing the Royal Signals. During my drill instruction the Corporal bawled into my ears," Lad are your legs sore?" I answered "No Corporal". He replied "They should be! You have your gaiters on the wrong way round!" I had the buckles on the inside of my legs and they had been that way for a week.

During the basic training we received our TAB injections. Whilst on the Square a good number of the troop fainted due to the effects of the injection and the heat that summer. Next morning we were marched down to an overgrown lawn to cut grass using our jack knives. Later I discovered this was to stop our muscles becoming stiff after having the injection.

We all counted the days from the start to the finish of basic training. One of the hit parade songs at that time was called Unchained Melody. One verse stated that "time goes by so slowly" - this did not help how we felt.

The Aisne Lines Corporals had us all drilling and looking like soldiers within four weeks. 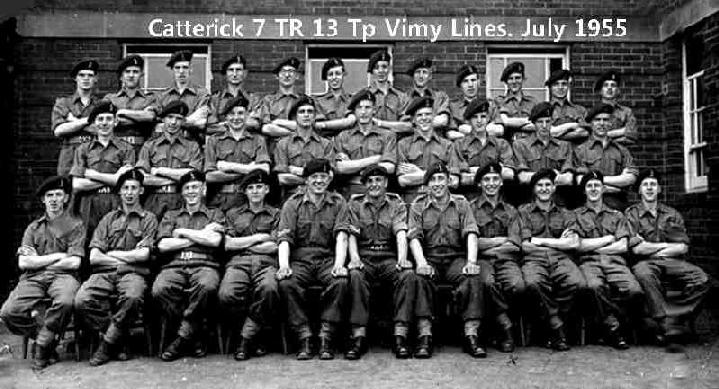 After an IQ test I was posted to Gaza Lines to be an OWL, [Operator Wireless and Line.] The Training camp was located adjacent to St Oswald's Church and was on the road to Richmond. We were instructed in Morse up to 18 Words per minute (to pass at 12 WPM), operating Transceivers, erecting aerials, land line Morse {Fullerphone] plus drill/weapons,

I found Morse up to about 8 WPM was fairly easy as I had already had training before being called up, The operating lecture rooms had around the periphery 19 sets with short restricted aerials, both voice and Morse being the modes of operating. Included in the training were Schemes taking us out and about with the Catterick Training Area operating from vehicles as out stations and the Control being back at the Camp, Out in the Yorkshire countryside during the summer was like a summers day out. However the winter in canvas covered trucks was a chilling experience!

When the trade training was complete I was listed as " Best Recruit" everyone being posted but myself,then advised that I was to remain as an Instructor receiving a Lance Corporal's pay. Not being posted I felt that I was a fireside soldier, but I had to accept what I was given. It had its benefits - frequent 24 hour passes to get home. However when I got home to my village it was dead after the buzz of a military camp and going home became less frequent.

I taught Morse to numerous trainees up to 18 WPM until the trade spilt into Wireless Operators and Telegraphists - the latter going to Lincoln; I remained in Catterick and taught voice operating, the equipment being 19,52, 88, 53, sets, and drill. One of the Training huts was a Nissan Hut, which I am sure went back to WW1, desks down each side and an operators Oscillator at the end of the hut where I could send to each trainee including adding in noise and interference to each desk/headset. 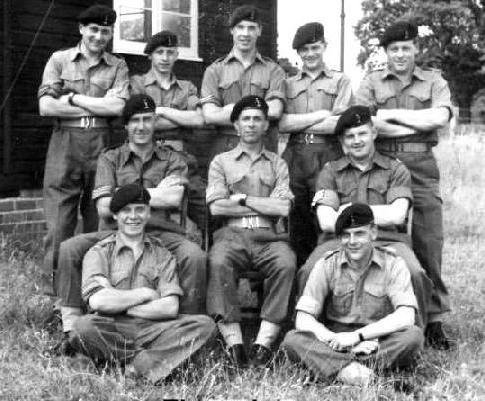 The Training Team - I am bottom left

What I did notice when trainees were taught Morse was that while having their dinner the dinning room tables became a Morse sounder as they were sub-consciously sending with their knifes.

At times the trainees on Schemes were allowed to make up their own messages. I remember one was "Tanks bearing down on us please advise immediately" a joker at the other end replied " Say after me: - Our Father which art in Heaven " !!! One LCV, a Command vehicle I was in with trainees was stuck in an old quarry during a snowstorm. The 34 feet aerial collapsed on to the side of the quarry and was under the snow, surprisingly we were still being heard by Control. It took a couple of days to get as out of the quarry. On rare occasions we had inter services Morse radio nets - the Navy operators were very slick and had our trainees pulling their hair out.

During the Suez crisis our camp became a re-enlistment centre for Reservists. This involved setting up a transceiver at Darlington Railway Station, radioing back to the camp, giving names etc for those posted to our camp. My mate in our camp who had been demobbed six weeks earlier had been called up; he finished up in Port Said, Egypt.

I was promoted to Corporal and later my name came up for promotion to Sergeant. However being a National Service man I could not receive this rank. Before leaving I was interviewed and asked to remain in the service with the possibility of joining SAS - which I turned down.

Looking back I can honestly say my service was rough at the beginning but later I enjoyed the Army life being a young man and it was touch and go whether I remained. I have good memories. It would be great to hear from some of my old mates.