Mitchell Sorbie, born November 23rd 1867 in Stonehouse was the 8th child and the youngest son of Thomas Sorbie and Isabella Brown. Tom is mentioned a number of times in Sorbie histories as Isabella was his 2nd wife and in total he fathered 20 children, all born in Stonehouse. In fact he was aged 60 when Mitchell was born, with Isabella being 24 years his junior. Thomas died in 1867 and Isabella in 1900, having remarried John Stewart who was a Thatcher, going on to have her 11th child, Marion in 1881.

The census records show Mitchell living with his mother and step-father John Stewart, in Lawrie Street and Boghall Street in 1871 and 81. On February 11th 1887 in Kirk Street, Strathaven, Mitchell aged 20, married Mary Wilson who was 2 years younger. Although born in Tradeston, Glasgow her parents John and Mary Ann had settled in Avondale where her father was a plumber and gas fitter. At the time of his marriage, Mitchell's profession was given as 'handloom weaver' and Mary's as a 'machinist in a woollen factory'. 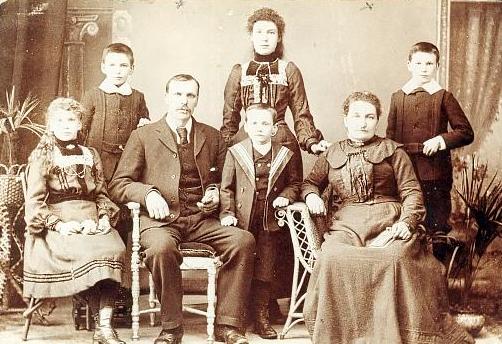 A later photo of Mitchell and family taken circa 1905.

Mitchell and Mary had five children. Firstly two girls, Mary and Isabella, born in 1887 and '89. Then three boys, Thomas, John and Mitchell in 1891, '94 and '96. The family must have moved around quickly as their offspring were born in New Street, Angle Street and Lockhart Street, Stonehouse. Tom Sorbie their eldest son was born at 7, Angle Street. 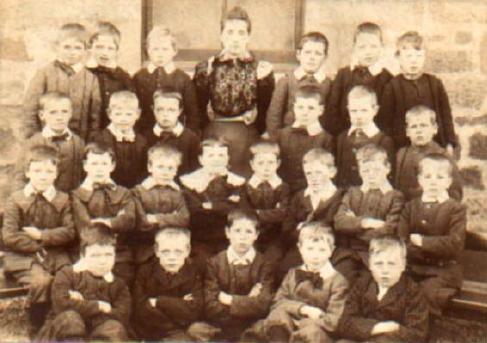 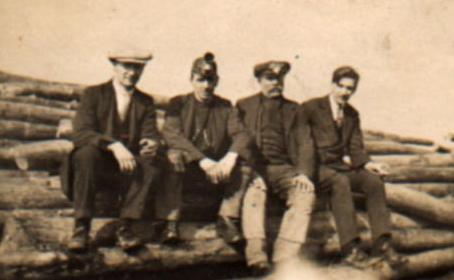 Mitchell worked in the mines as a 'Colliery Oversman'. This photo will have been taken just prior to his death in August 1913. He died at the family home in New Street, Stonehouse. 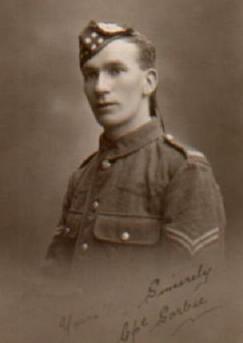 The photograph is signed by  Tom. 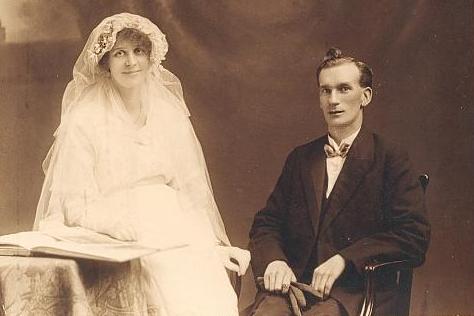 The marriage of Tom Sorbie and Mary Shearer - Stonehouse, July 1920.

It was in Stonehouse that Tom married Mary Nimmo Shearer. She was born in Rankinston, Ayrshire, the daughter of James Shearer and Mary Murdoch, but was now living at 64, Camnethan Street in Stonehouse. Mary, a teacher was aged 24 and four years younger than her husband. At this time Tom was employed as a grocery manager at the 'Co-op' shop in Carstairs, Lanarkshire and was living in the town at the time of his marriage.

Tom and Mary decided to move north to the Highlands because there wasn't much work around for them both in the area. Mary got a job as the schoolteacher at Glenshiel Primary in Inverness-shire. The pupils were children of all ages and were taught together in the same class by just one teacher- Mary Sorbie. The schoolroom and house were in the same building and this is where their only child, Mitchell was born on March 24th 1922. Tom Sorbie meanwhile worked in a shop in the nearby village of Kyle. 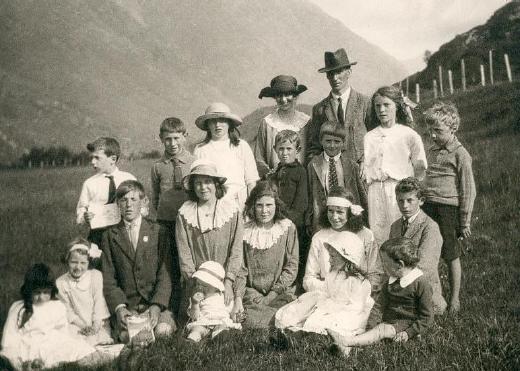 Tom and Mary Sorbie - Glenshiel, Highlands in 1923. Their baby son Mitchell is front.

Sometime during the 1930s the family moved to Lochluichart, near Inverness where Mary became the schoolteacher there and Thomas worked in a shop near the coast at Dingwall. During WW2 he worked up in the Orkney Islands in the far north of Scotland as the manager of the Church of Scotland canteens for the servicemen. It was at the school house in Lochluichrt that Tom died in May 1948 at the age of 56. 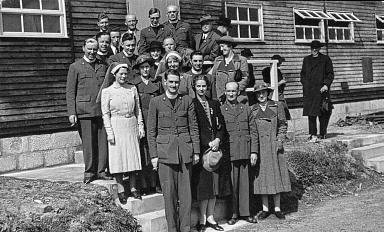 When son Mitchell was at Glasgow University studying Mathematics, during his summer holidays he worked on a croft in the Highlands at Ratagan, not far from Glenshiel where he was born. This is where he met Georgina Kirkland White (known as 'Dorothy'), from Leith, Edinburgh who was working for the Women's Forestry Service of the Forestry Commission during WW2. Mitchell was then called up for military service. He joined the Royal Corps of Signals and was attached to the Royal Devon Yeomanry Artillery. He was a radio operator in the tanks. He served in Sicily and was at the Allied Landing at Salerno in Italy in 1943. 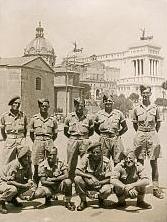 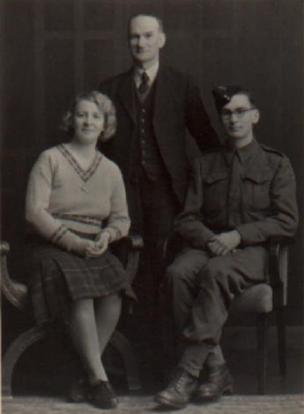 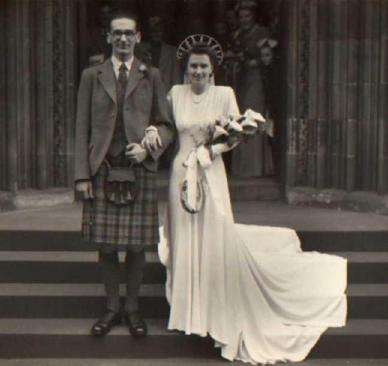 After the war Mitchell started his teaching career and was living in Motherwell, close to Stonehouse, his father's birthplace. He had been staying there with his grandfather James Shearer whilst studying at Glasgow University, so he was familiar with the area. James was Head Gardener at South Lodge County Hospital, Motherwell. It was in the town that Mitchell and Dorothy had three children, Margaret in 1950, Mairi in 1954 and Thomas in 1956. Mitchell's mother Mary also moved down to Lanarkshire and it was there that she died in May 1964 aged 69. 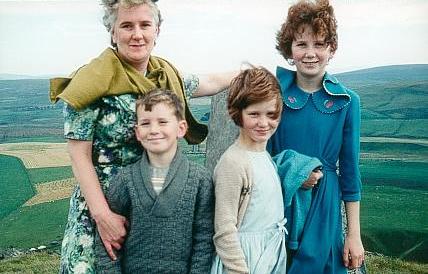 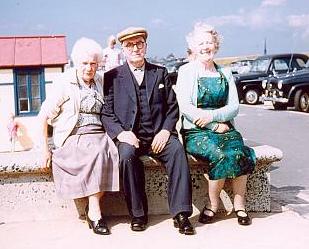 Mitchell's mother, Mary (right) with her sister-in-law Isabella (see top photo) and Bella's husband Robert Brodie who was a Famous Labour County Councillor from 1946 to 1958. "Brodie Place" is named after him in Stonehouse. The photo was taken in Ayr, 1962. 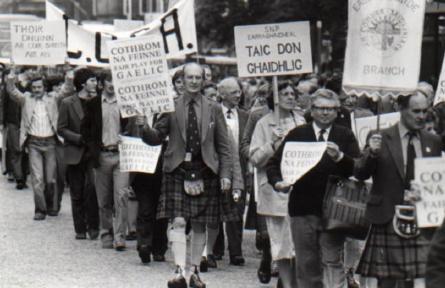 Princes Street, Edinburgh in May 1981

In the march for the Gaelic language photo, Mitchell is in the middle with the kilt and placard saying 'fair play for Gaelic'. The picture was featured in the 'Scotsman' newspaper. Being from the Highlands he enjoyed the culture and became president of the Highlanders Association of Motherwell and Wishaw which organised ceilidhs. He brought the major Gaelic Festival 'The Mod' to Motherwell in 1983. 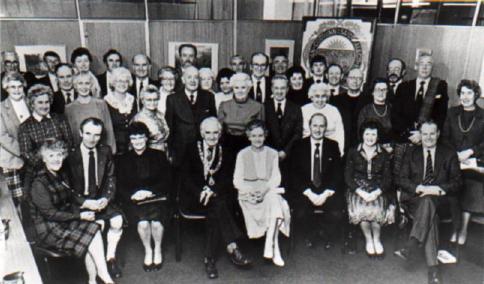 Mitchell was also President of the Probus club, a Professional/Business association. He was an elder of St. Mary's church, Motherwell and a member of the Male Voice Choir there. He also edited the church magazine for 10 years. He was also a keen and successful bowler. Mitchell died in Motherwell in September 1997 aged 75. His wife Dorothy still lives in the town.