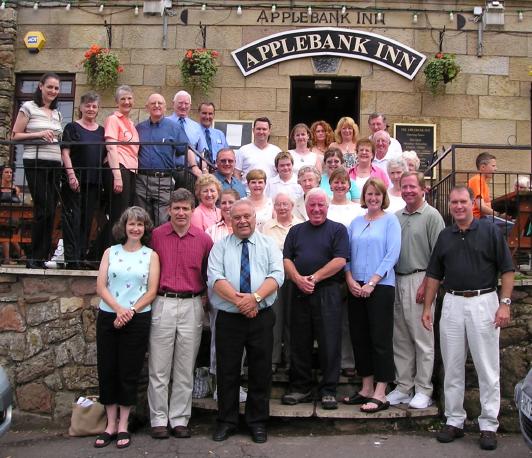 The Sorbie cousins gather outside the Applebank Inn

On Saturday 9th July the members of our 'Sorbie Family' e-group held a 'Mini-Gathering' on a warm sunny day in Larkhall, South Lanarkshire. This was originally due to be a full get-together at St.Ninian's Church Hall, Stonehouse, however due to various circumstances it was not possible. It was therefore decided to hold a more informal affair at a local venue and the historic Applebank Inn was duly selected as the perfect choice.

Larkhall has a very close connection with the Sorbie family, lying only 3 miles from our spiritual home of Stonehouse. Many family members have moved there over the years including Tom 'Tamaur' Sorbie who made the short trip shortly after he was married in 1962. Tom was instrumental in arranging the gathering and making it such a success.

In total 32 people made the trip including 2 families from the USA who had arranged their vacations in Scotland to coincide with the event. Doug, Jill and Anna Sorbie and partners from Wisconsin and Randy and Peggy Frame from Pennsylvania were thrilled to return to the area from which their ancestors emigrated in the early 1900's. 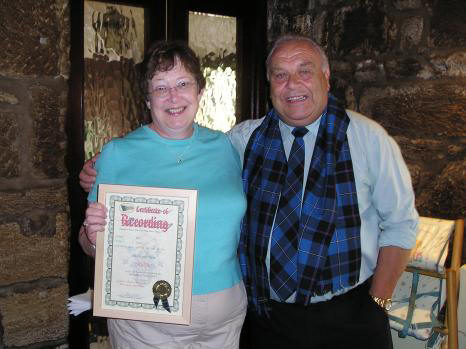 Tom 'Tamaur' Sorbie of Larkhall and Muriel Sorbie of Edinburgh

The assembled 'cousins' were welcomed with an opening address from Tom Sorbie who included some history on the Inn and told stories concerning it's ghostly reputation. He also made reference to the various 'colourful' characters who regularly made the short journey between Larkhall and Stonehouse. It was once suggested by local Stonehouse residents that a wall should be built to stop these strange 'Larkie folk' escaping from their own town. They thought it would be cheaper than an Asylum!. Tom then presented all those gathered with a special 'passport' that allowed them to leave at the end of the day.

Following this your 'webmaster' Andy Potts presented an overview of the recent work carried out on the Sorbie Family tree and website. The tree has trebled in size to 9,500 individuals since the first gathering in 2001 and the website now contains 115 pages. Over the last 5 years the 'Sorbie Quest' has undoubtedly been a huge success and brought countless cousins together from all over the world. 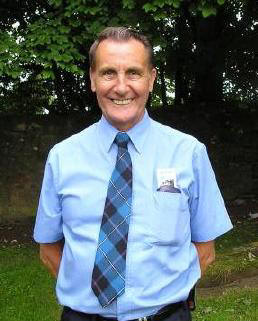 A break was then convened when a hearty lunch was served followed by an informative talk by Muriel Sorbie who explained how the family tartan was conceived, designed and then voted for by e-group members. This was registered with the Scottish Tartans Authority in September 2004 - a great source of pride to the Sorbie family. Muriel had the certificate with her to confirm that tartan now has 'official' status. To confirm this fact please click on the website: http://www.tartansauthority.com/web/site/home/home.asp carry out a 'Tartan Search' and enter the name 'Sorbie' in the 'By tartan' field..

To round off the Applebank proceedings, a photographer from the local newspaper the 'Hamilton Advertiser' appeared to take a group photo of the gathered Sorbies. As a final memento of the day all those attending were handed a presentation 'mini-gathering' bookmark. This has become somewhat of a tradition and is the third of it's kind to be produced. 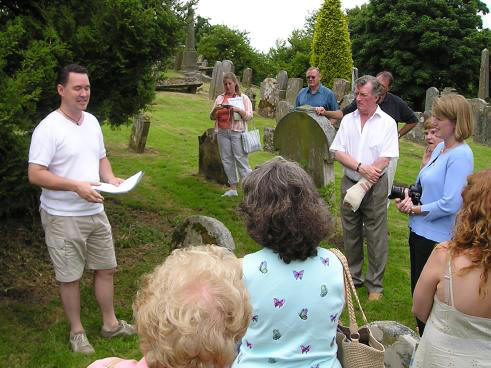 John Young begins his presentation in the Old Kirkyard

For the second half of the afternoon the Gathering attendees drove the short distance into Stonehouse for a tour of the old St.Ninian's churchyard by local historian John Young who had been a guest of the Sorbies at the preceding meal.

John has written a number of books on Stonehouse and the conservation and restoration of St.Ninian's has proved to be a real 'labour of love'. In 1999 he initiated the 'Phoenix Project' as the cemetery had fallen prey to vandals and was in a sorry state of disrepair. As a result of this the inscriptions on all 424 headstones were meticulously recorded by John and the Kirkyard mapped in exact detail. This task alone took two years to carry out.

In addition a team of volunteers were recruited to lift and re-fix broken and cracked headstones and restore the general appearance of the Kirkyard from the eyesore it had become. In other words it was reclaimed by the community as a place of historic importance as well as an attractive and safe environment. It is a testament to John and the local heritage group that this ancient site has been restored to the excellent condition in which it appears today. 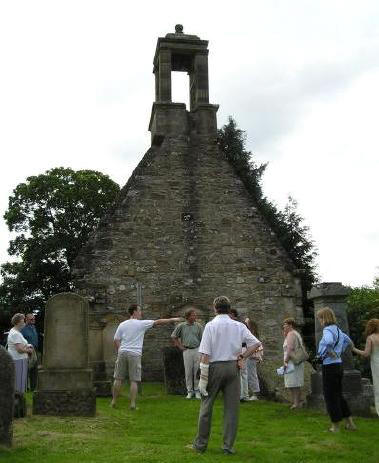 John points out another item of historic significance

Of course the work is never ending as many headstones are still deteriorating with the weather and the ravages of time along with the old 'Kirk' itself and surrounding walls. John emphasised this as he took the group around the cemetery giving us a fascinating talk on the memorials and artefacts contained therein. This included the different inscriptions and symbols on the headstones denoting the trade of the person or even how they died. He also gave us potted histories on the local characters and town 'worthies' buried there.

These included the famous Covenanting 'martyr' James Thomson, killed at the Battle of Drumclog in 1679. A number of Sorbies are descended from James including the majority of our American cousins. This is because James' descendant Ann Thomson born 1830 married Mitchell Sorbie of Stonehouse and had 5 children in the 1850's. Many of their descendants emigrated to the USA during the pre WW1 depression in search of work, usually in the mines. 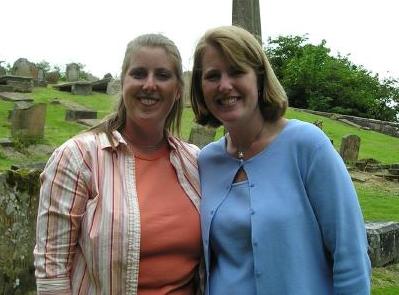 John records in his book 'The Phoenix Project' that his favourite inscription is:

As he pointed out many of the headstones are a godsend to family historians as they give information unavailable from other sources and he mentioned that Scotland is the only country in the World where the female's maiden name is given on the inscription. John also identified 4 Sorbie graves in the Kirkyard but confirmed there were many more family members buried within it's walls without any headstone. 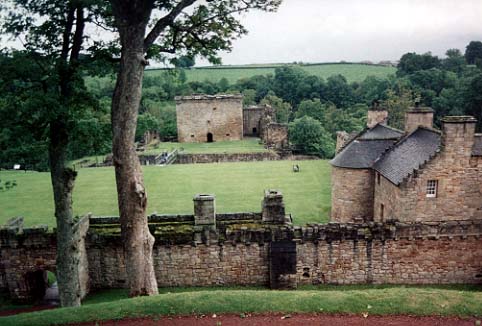 The view of Craignethan Castle from the west

To round off the day a number of the party made their way a few miles up the road to Draffan, Lesmahagow, the site of Craignethan Castle. This was built by Sir James Hamilton of Finnart in 1530. It is the last great private castle of high defensive capability to be built in Scotland. Sir James was the illegitimate son of James Hamilton, the first Earl of Arran.

The history of Craignethan is intertwined with the history of Scotland and has been at the centre of much bloody feuding and political manoeuvring. Chiefly it is associated with Mary Queen of Scots, the most romantic and tragic figure of Scots history and a strong ally of the Hamilton family. When Mary was sprung free from imprisonment at Loch Leven Castle she was hosted briefly at Craignethan Castle. On May 13 1568, the Queen's army, with the youngest son of the Duke, Lord Claud Hamilton, was intercepted at Langside on it's way to Dumbarton and defeated by opposition troops lead by the Earl of Moray. Mary fled south to England and Craignethan and Hamilton Castles surrendered to Moray.

Mary was duly imprisoned in England for 19 years by her cousin Queen Elizabeth I and was then beheaded for supposed treason in 1587 and is naturally assumed to be the headless lady seen wandering around Craignethan Castle, the last place in Scotland where she was warmly received and lovingly protected. 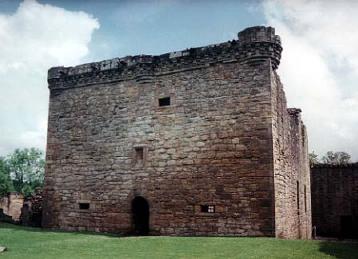 In 1659 Andrew Hay bought the castle from Anne, Duchess of Hamilton, and promptly built a new residence and office range in the outer courtyard. This construction contributed further to the ruination of the old castle by robbing it of masonry. In 1730, the castle was purchased the Duke of Douglas and decay of it's more ancient parts continued throughout the 18th century.

The increased awareness of the architectural importance of the site led to an acknowledgement of the need to ensure the preservation of the remains. At the turn of the 19th century repairs were carried out by the 12th Earl of Home and in 1949 the 14th Earl of Home gave the castle over to the guardianship of the State.

It was a great way to round off a hugely enjoyable day that once again brought together Sorbie family members from near and far. These get-togethers have now become a real tradition and above all a fun day out. Only a fortnight to go before the next one comes around in Canada...

(Written especially for the occasion by Tom 'Tamaur' Sorbie)

'Twas within the Applebank, Larkhall, to meet

Frae roon the World to take a seat

The Sorbies once again we “Gether”.

To meet old and new friends for a “Blether”

They’ll talk about the Family Tree.

With Andy adding names for all to see.

Stories will be told of Sorbies old

Many as we know are Famous and Bold.

Stonehouse is the Family abode

Not far from Larkhall, just up the road.

History of the village cannot be made

Without the name Sorbie being said.

So many in the village with the same name.

When Kyles were being played it confused the game.

His descendants Worldwide have grown and grown.

The Sorbies throughout the World are few.

Nevertheless they are mighty and true

Be proud of the name as we all should be.

Acknowledgment to the following book and website for excerpts used: