About 13 miles West of Stonehouse (towards the Coast) and just across the Ayrshire border is the Irvine Valley. This contains a number of small villages including Darvel, where my wife Avril comes from and where her family still live. Darvel is famous locally as a 'Lace Making' town and the birth place in 1881 of Sir Alexander Fleming, the discoverer of Penicillin and Nobel Prize winner in 1945.

Just before you reach Darvel you pass the striking rocky outcrop of Loudoun Hill. This is has been created by glacial action in the Ice Age which has smoothed out the valley, leaving a 'plug' of harder stone behind (granite I have been told).

It's strategic position at the head of the valley meant it was often passed by armies making their way inland or out to the coast. As such it has been the scene of many Battles, including in 1296 when William Wallace ('Braveheart') ambushed Fenwick the English Knight who had killed his Father. It is said that although Wallace had only 50 men against 200 enemy soldiers, Fenwick was killed and the English scattered, leaving 100 dead altogether with a large amount of useful armour, weapons and horses. Wallace was subsequently declared an outlaw....for the rest, please see Mel Gibson in Hollywood's (not always accurate) version of events. Or probably better if you just read a reliable history book.

11 years later, in February 1307, the year after Wallace's execution in London, Robert the Bruce landed with a company of men at Turnberry on the Ayrshire Coast after spending the winter in exile in Ireland. It was the beginning of his campaign to recapture Scotland. Two months later he was at Loudoun Hill at the head of a small army of 600 which he had collected. Although vastly outnumbered, by choosing his ground skilfully he was able to beat off the enemy, led by the Duke of Pembroke and win his first major battle. Shortly after this a lucky event happened for Bruce, the ruthless and immensely feared King Edward I of England died. He had been furious that Bruce had risen against him and had lead a great army North, but had died at Burgh-on-Sands on the Borders of England and Scotland.

Fortunately for the Scots his son Edward II was one of the weakest and most foolish Kings that ever ruled England. Bruce knew what kind of a man he was and was reported to have said that he was more afraid of the bones of Edward I than of the living Edward II. In June 1314 Robert the Bruce defeated Edward II's army at Bannockburn in Stirlingshire and was crowned King of the Scots. The first thing Bruce did after this was not to invade England, but Ireland, but that's another story.... It was to be the beginning of 400 years of Scottish Independence until in 1707 the 'Treaty of Union' was passed and Great Britain was formed, uniting the two Countries.

I include two of my favourite photos which I took on a beautiful winter's morning on Boxing Day, December 26th 1995. We decided to climb the hill with Avril and two of her Brothers, Colin and Davy. You have to be fit as it's pretty steep on all sides (the steepest is used by rock climbers for practice). But it's worth it because the views from the top are superb, looking eastwards towards Strathaven and Lanarkshire and in the opposite direction down the Irvine valley towards the Firth of Clyde and the mountains of the Isle of Arran in the far distance,  (Goat Fell, it's highest peak can be seen on the photo). 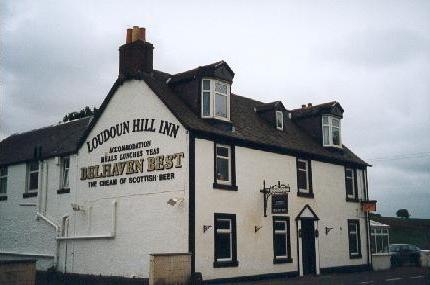 As mentioned last year, I will buy anyone who climbs it with me a pint or a beverage of their choice in the 'Loudoun Hill Inn', a splendid 18th Century coaching house at the foot of the Hill.  All cousins welcome.