13th November 1808:
Joseph, illegitimate son of John Sorbie and Mary Milligan, Shawhead
(Reference - 867/1 for the Parish of Irongray in the County of Kirkcudbright
covering the years 1757 - 1819).

The identity of Joseph's father John is unknown, but it is strongly believed that he was the same John Sorbie born in the neighbouring Parish of Balmaclellan in 1783 who later married Janet Paterson. This was the only Sorbie family in the area and the dates fit. Joseph's mother Mary later married Robert Littrick on December 23rd 1810 in the neighbouring town of Dumfries. Their first child William Littrick was born three years later in January 1814. This would make William the half-brother of Joseph. 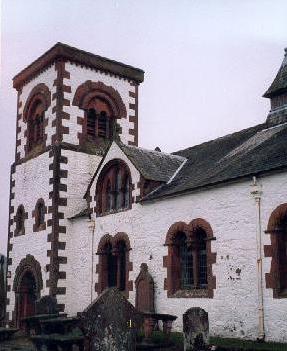 The next record of Joseph Sorbie appears in the 'History of Hancock County' - Ohio, U.S.A. which includes the passage: "..The year 1834 ushered in quite a number of families, Henry Stoves, Jacob Huffman, Nicholas and Dillard Dukes, Joseph Baker, John Flick, Abraham Watkins, Joseph Sorbie and Shedlock Pancoast, all coming during that year.."

The 'History of Union Township' goes on to say.. "Joseph Sorbie, of Guernsey County, Ohio, entered the southeast quarter of Section 24 November 27, 1833. In 1834 he brought out his family and resided upon this land till his death September 6, 1857." There is another  reference to Joseph Sorbie in the book "History of Hancock County" by D.B. Beardsley, published by Republic Printing Co., Springfield O., 1881. It says that Joseph Sorbie ran a grocery and notions store in Rawson (we are unsure what a 'notions' store sells).

On April 14th 1840 Joseph married Mary Ann Barnett from Pennsylvania in Hancock County. The following year Ohio Land Records show that on 9th January 1841 Joseph Sorbie bought 40 acres of land in a 'Cash Entry Sale' at the Bucyrus office in Ohio (Document 17505). In the 1840 Ohio, Hancock County census Joseph Sorby is listed as head of household. In that household there was 1 male between 30 and 40, 1 female between 20 and 30 and 1 female between 60 and 70. The younger person was obviously Joseph's wife and it is thought that the older lady was Joseph's mother Mary (Milligan, later Littrick).

It is worth noting that in the 1850 census (Ohio, Hancock, Union Township) the next house enumerated after Joseph Sorbie was that of Catharine Barnet aged 59, born in Pennsylvania. Living in the same residence was Mary Littrick aged 76 born in Scotland and a 'Binal Baker' aged 13 years. These were the two mothers of Joseph and Mary plus a child, identity unknown. Mary Littrick died the day after the census on September 27th 1850. She is buried in Canonsburg Cemetery, Hancock County. The words 'Native of Scotland' can be seen at the foot of her tombstone. 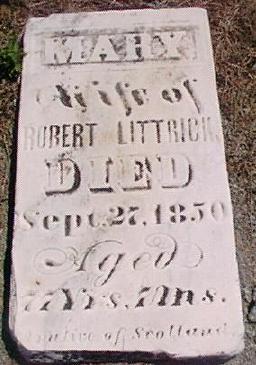 Ten years later in the 1860 Census, Joseph is out of the picture, having died on September 6th 1857, aged only 48 years and 10 months. Joseph is buried in Cannonsburg Cemetery, Hancock County. 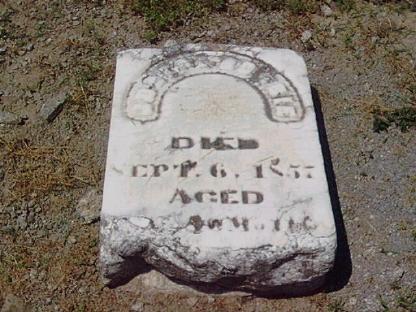 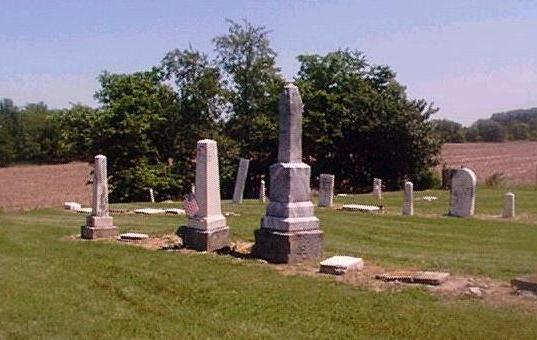 A photo of the Sorbie family plot - Cannonsburg, Ohio.

The shorter obelisk with the U.S. flag in front is George B.'s grave. Joseph's stone lies on the ground next to the taller obelisk. All the other stones are too deteriorated for positive identification.

The caretaker of the Cannonsburg cemetery has the following in his records for  the Sorbies :

He died in Nashville, Tennessee

Two short years later Joseph and Mary's son George Sorbie aged 18 enlisted with the Company D, 99th Infantry Ohio at the outbreak of the American Civil War. He enlisted on 26th August 1862 and sadly died less than four months later on 17th December 1862 at Nashville, Tennessee. This all too common fate awaited many thousands of young men in the bloody civil war of the mid 1860's: 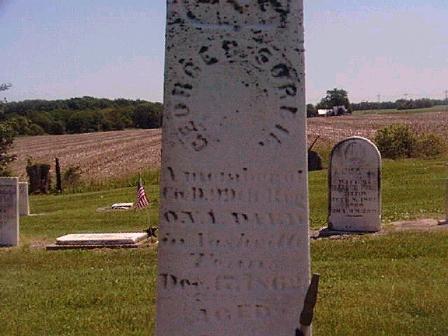 A close-up of George B. Sorbie's stone. The rural location of the cemetery can clearly be seen by the farmland behind.

The History of the Ohio Regiments records that: 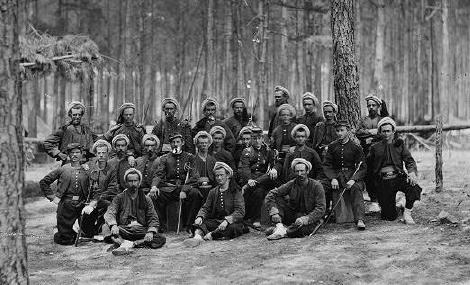 Men of the Union Army - Ohio regiment, pictured circa 1864.

The 99th soon proceeded to Kentucky and took part in the defense of Louisville. After coming under the command of Colonel Peter T. Swaine, formerly of the 15th Regulars, it pursued Bragg southward in early October and operated against John Morgan marching to Nashville, Tennessee. Here the regiment remained on duty where it took part in the battle of Stone River at the end of December.

At Chickamauga in September 1863 it was engaged both days with considerable loss followed by the siege of  Chattanooga. In November of that year it participated in the battles of Lookout Mountain and Mission Ridge. 1864 saw a number of battles in Georgia and in May started with Thomas' army on the Atlanta campaign, fighting at Rocky Face Ridge, Kenesaw, Atlanta, Jonesboro and Lovejoy. At Kenesaw it held a ridge against desperate assaults of the enemy, and the men fired an average of one hundred rounds. After taking part in the siege of Atlanta, July 22nd to August 25th the regiment pursued Hood northward into Alabama. From there it joined Thomas at Nashville, taking active part in the battle at that place. It followed Hood as far as Columbia, where the Regiment was consolidated with the 50th Ohio on December 31st 1864. 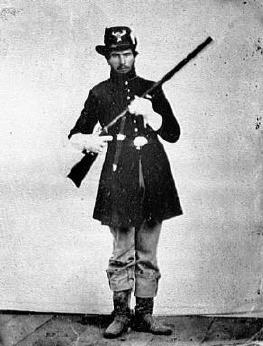 "..Cortland R. Hopkins, whose well-known probity and upright character class him among the valued citizens and representative business men of Custar, well deserves mention in the history of Wood county. He was born in Blanchard township, Hancock county, April 23, 1848, and is a son of Matthew E. and Mary Maria (Runnels) Hopkins. He is of Scotch extraction, and a descendant of John Hopkins, one of the signers of the Declaration of Independence, who emigrated to America with his two brothers. The parents of our subject were both natives of Ohio, and the father was a farmer by occupation.

Our subject completed the course of the public schools of his native town, and then pursued a three-years' scientific course in Oberlin College, after which he entered Cornell University, New York, where he remained for two terms. After his return home he was married to Miss Quincy Sorbie at Warsaw, Indiana.

After their marriage they removed to Hancock county, where they located on a 1,000-acre tract of land owned by Mr Hopkins' uncle, and farmed that successfully for five years, after which he purchased eighty acres of wild land in Liberty township, Wood county, and returned to his native State. He afterward added, to this, 300 acres, and became the owner of a valuable farm. In the fall of 1892 he was taken ill, and for a year was unable to engage in active business. Owing to financial difficulties with one who pretended to be his friend, he was forced to sell 400 acres of his land. Previous to his illness he had built a grain elevator in Custar, and in the spring of 1894 he removed to this place, and has since given his attention to the business there, handling coal, hay, grain and straw, and enjoying a good business. He also owns considerable town property in Custar, and through his own efforts has acquired a comfortable competence.

Mr. Hopkins is a Republican in politics, and was elected mayor of Custar in the spring of 1896; although the town is strongly Democratic, he was elected by a large majority over his competitor for the office, which he fills to the satisfaction of the people, and with credit to himself. He is an intelligent, popular and enterprising citizen. He and his wife had two children, but both are now deceased. Minnie, born in Iowa, October 12, 1874, died December 20, 1879. Mabel, born in Wood county; died at the age of six months.."

Quincey Hopkins died in June 1919 at the age of 68 and her husband Courtland died in December 1927 in Benton Ridge, Hancock County at the age of 79. 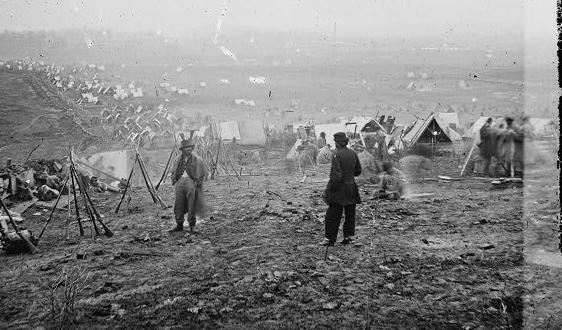 OTHER CHILDREN OF JOSEPH AND MARY SORBIE

Mary Elizabeth married John Keller 3 July 1866, she had a child (name unknown) on 22 June 1868 and died 2 July 1868. She is buried in the Canonsburg Cemetery in Union Township, Hancock County, Ohio.

Sarah married Squire J. Carlin in Hancock County, Ohio and had the following children: Marietta (1869), Joseph (1871), Mertin (1873), Milton (1875), Parlee (1877) and Floid (1879) This information gathered
from the 1880 USA Census (Indiana, Kosciusko, Wayne Township). Squire was the son of Squire Calvin Carlin, born 1801 in Auburn, New York. After travelling east with his family in the Spring of  1807 he became one of the earliest settlers in Findlay, Ohio along with his younger brother Parlee in 1826. After opening the first store in the town they later moved into real estate and banking, rising to positions of high public office. The Carlin brothers played a major role in the shaping of the town into the major thriving city it is today. Parlee died in 1883 at the age of 76 and Squire Carlin after living to see the great oil and gas boom of the late 1880s expired in 1892 aged 91 years. In his latter years he held the distinction of being the oldest continuous resident living in the community.

Isaac married Elizabeth (maiden name unknown at this time). They had no children by the 1880 USA census.

Joseph's wife Mary remarried Arthur Sexton. Sometime between 1870 and 1880 the family moved to Indiana, Kosciusko County, Wayne township. Isaac and Elizabeth stayed in Ohio, but the other surviving children moved to Indiana. Mary A. Sexton filed  claim in 1888 from the state of Indiana for government relief (Disability pension) since she was the mother of killed soldier George Sorbie and had no other  source of income. This leads us to believe that her second  husband, Arthur had probably died.

No known descendants of this family have been traced. We are very keen to make contact with anyone who can help us.

As mentioned, Joseph Sorbie's mother Mary Milligan married Robert Littrick in December 1810 and their son William was born in January 1814. Milligan was a common name in this area and Mary, born around 1773 came from Shawhead, a few miles west of Dumfries - the county town, famous for its connection with Robert Burns, the Scottish national poet. 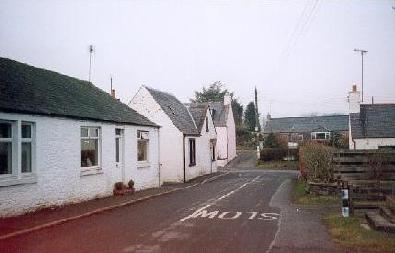 Mary and both her sons subsequently emigrated from Scotland to the U.S.A. It appears that Joseph Sorbie went first around 1833 to the state of Ohio and the others followed the next year. The life of Joseph is documented above, but Mary's other son William followed later and he married Gudith Arnold on 9th January 1845 in Franklin County, Indiana.

William and Gudith then moved to Hancock County, Ohio where brother Joseph and mother Mary were living. It was here that their first son, Robert Burns Littrick was born 5th March 1846. Robert was named after his grandfather and the 'Burns' connection harked back to William's birthplace of Dumfries. As a young man Robert joined up with the Union Army and spent seven eventful years fighting in the Civil war as a first generation American and then helping to build the railroads that opened up the West. When he returned home Robert married Abigail Nowlan on 11th September 1876. He was aged 30 and 'Abba' 29. She was also a native of Hancock County. Robert became an Attorney-at-law and together they had five children. 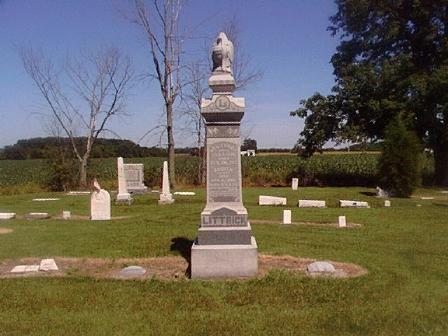 Gudith died on April 6th 1886 aged 61 years and William on January 9th 1898 in this 84th year. They are buried together in Canonsburg Cemetery, Hancock County, the place with which they had a long and happy association. The cemetery is also the last resting place of William's mother Mary (Milligan). Their son Robert Burns Littrick died in August 1927 at the age of 81 after an extremely eventful life. Abigail followed five years later in May 1932 at the age of 86. Both were residents of Marion, Indiana, the neighbouring state of Ohio to where many of the Littricks and Sorbies had migrated.

Their great great grandson Bartholomew Barker was born and raised in Ohio only a couple of hours south of Hancock County. He now lives in Connecticut and has spent many years researching his family tree including the Littrick family. The 'Sorbie Quest' is delighted to be able to be able to join forces with him on this project.

Many thanks for the use of the above photos of gravestones and other family information.