The 'grand-daddy' of thousands of living Sorbies

John may not be the obvious choice for a 'Famous Sorbie', but to his many thousands of descendants he is the most famous of them all.

Quite simply without him none of them would be here. At the last count the Sorbie family tree consisted of 16,500 individuals, of which 6,500 have a direct link back to John Sorbie. This represents over 40% of the total tree. This is all known descendants - they of course only represent a fraction of the grand total around the world. It was incidentally John's descendants that crossed the ocean to North America and nearly all USA and Canadian Sorbies are descended from him.

Born in Stonehouse, Lanarkshire in 1740, John is believed to be the son of James Sorbie. All research points to the fact that John's two brothers were William, born in 1744 and Gavin 1748, although the final proof stubbornly eludes us. William has 1,300 known descendants and Gavin 2,300, so you can see they were a very productive family and have a lot to answer for!! All three named their first son 'James' which is another indication as to their parentage. Unfortunately Stonehouse parish records do not exist from before this time so the identity of their father has yet to be proven. The only clue is a 'Mortcloth' (death) register for a "James Sorbie, weaver" on August 4th 1776 and it is believed that this was John's father. 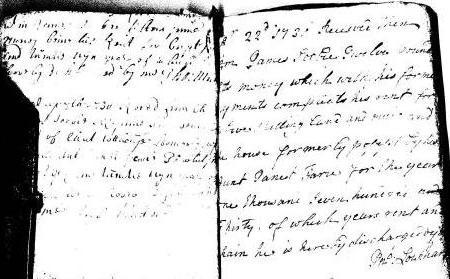 James is believed to be the owner of the 'Sorbie Rent Book', the oldest known Sorbie family document. He started to pay the rent in 1726, taking over from a William who appears to have been his uncle. The last time James paid the rent was in March 1770, so presumably that is when he became unable to continue being the main breadwinner. William (most probably his son) then paid the rent in April 1771 and thereafter.

This might indicate that James' father was a John (after whom the first son was named) and the second son was William. Even so, James paid rent for 45 years and was presumably an adult when he started, so he must have been a fairly old man when he died in 1776. One may surmise that William jnr. was the one who stayed in the house, even though he was a younger son, because he remained a weaver. The houses where the Stonehouse weavers lived had a special room for the loom - while older brother John had already started to branch out in other ways.

The entry for John and Grizel enlarged.

Around 1758 at the age of 18, John married Martha Sterling and they had two children, Janet on September 23rd 1759 and James on November 7th 1761. It seems that Martha died at a young age (possibly in childbirth) as John remarried Grizel Miller on October 26th 1765. Grizel is an old Scots name which was often shown as 'Grace', however not much at all is known about his second wife. John's daughter Janet (Jean) married James Hamilton of the parish of Hamilton in Stonehouse on January 26, 1777. The index in the parish register mentions Jean to be "John Sorbie's Daughter".

John and Grizel had four children, James in 1766, Martha 1769, Thomas 1771 and John 1774. John had a previous son named James from his first marriage to Martha Sterling, so he must have died in infancy. As was the tradition, John named his next son James in an effort to carry on his father's name. The next child, Martha was then named after his previous wife who had died young. His next child was of course Thomas who Sorbie family members will recognise as the individual who later married Janet Thomson in July 1797. This marriage was extremely productive as they had seven sons all of whom had large families.

The entry for their son Thomas' birth, May 14th 1771 in Stonehouse.

On the above baptism register, John Sorbie's occupation is given as a "coal grieve" which was a "factor" or agent dealing in coal. Although his original occupation was as a weaver John appears to have branched out with the development of the Lanarkshire mining industry at this time.

John died in April 1788 at the early age of 48. At this time it was the practice in Scotland for mortcloths to be rented to cover a coffin during the funeral ceremony. In the absence of a coffin these were purchased to cover the body itself. Parishes in Scotland kept a record of mortcloth rentals, including the name of the deceased and the person who paid the mortcloth rental fee, typically the next of kin. Many of these records have been preserved and provide an excellent substitute when death records cannot be found. In Stonehouse mortcloth registers exist for the years 1706-1710 and 1767-1815. As you can see below John's mortcloth cost four shillings and sixpence. 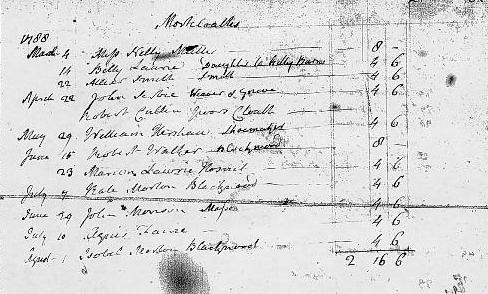 Extract from the 'Mortcloth register' April 1788 - featuring the name of John Sorbie (4th entry down).

John's brother William married Jean Jackson from the parish of Avondale (probably the town of Strathaven) on April 10th 1773 and they had four children. William died in 1819 at the age of 75.

Parish record for the marriage of William Sorbie to Jean Jackson.

John's other brother Gavin married Margaret Jackson at the age of 29 in 1777. Margaret was also from Avondale, leading us to believe she was the sister of Jean who married Gavin's brother William. They had two children in 1771 and 1773 however the Mortcloth registers then show the following entry "February 4th 1777 Margaret Jackson, spouse of Gavin Sorbie". The following year Gavin remarried Agnes McMillan of Stonehouse parish on December 6th 1778.

Parish record for the marriage of Gavin Sorbie to Agnes McMillan.

When Gavin and Agnes' first child Elizabeth was born 9th June 1780, Gavin's occupation was listed as "weaver". However by the arrival of their 7th child Gavin in September 1796, Gavin Snr. was given as being an "innkeeper". In total they had eight children, the last being Alexander in 1800 when Gavin was aged 52. Finally on his death on February 13th, 1813 his occupation had expanded to "innkeeper and auctioneer".

To summarise, John Sorbie and his family have bequeathed an incredible legacy to following generations. No-one did more to keep the Sorbie name alive when there were only a few families remaining at the end of the 18th century. Time after time 'new' branches of the family tree lead back to John, adding to the ever expanding total of 5th and 6th cousins - all descended from the most important Sorbie of all.

Many thanks for providing copies of the above parish records and mortcloth registers.