and his association with John Stirling

James Sorbie, and his wife Anna Stirling have 3 births recorded in the old parish registers of Scotland. Anna, born 2nd January 1663 and Margaret and Mary born 24th April 1664. On the 22nd January 1662, James Sorbie was made a Burgess and Guildbrother of Edinburgh, gratis, by an Act of Council at the desire of his cousin Mr John Sterling, a minister in Edinburgh. This was lucky for him, as to buy a Burgess ticket which gave exclusive trading rights was very expensive. John Sterling had already been made a Burgess and Guildbrother by an Act of Council in 1650. John Sterling was described as James' cousin in the Roll of Edinburgh Burgesses, there is therefore the possibility that John Sterling, as a cousin of James as descended from a Sorbie. 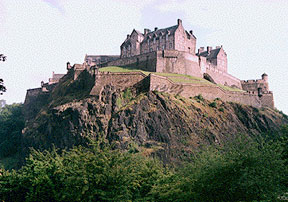 Edinburgh Castle, built in 1367 has a chilling past. Its hilltop position made it an ideal location for a prison, for many centuries illustrious men endured imprisonment and torture.

John Sterling along with James Guthrie and others were imprisoned in Edinburgh Castle in 1660 for a treasonable meeting in Edinburgh. John was released but James Guthrie was eventually hanged in June 1661. In 1662 after King Charles II had torn up the Covenant and had Bishops and Curates appointed to govern churches, John Sterling was one of 400 Non Conforming ministers who were ejected from their parishes. In 1665 John petitioned the Privy Council to be allowed into Edinburgh for certain affaires of consequence. He was allowed to stay 20 days and subsequently granted another month due to ill health. In July 1669 there was the 1st Indulgence granted by Charles II for many of the 400 outed ministers who had lived peaceably and orderly in the places they had resided.

In September 1669 John Stirling was licensed to preach at Hownam, a remote parish in Teviotdale in the Borders. In 1673 he petitioned the Privy Council for stipend outstanding and complained about the expense of transporting and settling his family to Hownam, and being subject to sickness being far from physicians and schools and other inconveniences. He was granted the whole stipend. 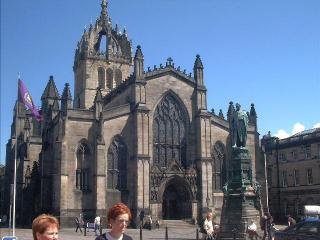 St. Giles Cathedral, where the resistance to King Charles first began. It is generally regarded as the mother church of Presbyterianism. The Cathedral was officially consecrated by the Bishop of St. Andrews in 1243.

In August 1676 he was transferred to Irvine on the Ayrshire coast to preach there. In November 1676 there was a supplication to the Privy Council by the Magistrates of Irvine on behalf of him. "John Sterling transported himself from Hownam to Irvine, 80 miles and now to transport his family, it will put him at great expense having a numerous family and necessitate to leave the greatest part of household furniture and necessaries which in that country cannot be sold or transported so great a distance because expense of horse hire exceeds value of things. Also the Kirk, School and Bridge in Irvine are much decayed and ruinous". The Lords allowed the stipend. John Sterling died there on Whitsunday 1684. His widow Christian Forbes was granted the full vacant stipend so she could transport her family to her intended residence. 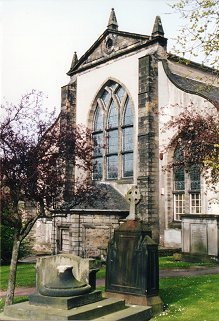 Greyfriars Kirkyard, Edinburgh, built in 1562. This was where the "Covenant" was signed in 1638.

Back to James Sorbie, another interesting connection to him concerned a John Gordon, Merchant Burgess of Stranraer, Wigtownshire who had been fined £240 as a result of a "Free Pardon" Act of Indemnity in 1662 by Charles II which although a pardon, burdened those whose guiltiness rendered them obnoxious to the Laws with payments "for the relief of the King's good subjects who had suffered in the late troubles". In 1664, John Gordon was imprisoned in Stranraer for uttering treasonable speeches and subsequently on 2nd February 1664 ordered by the Privy Council to be sent to Edinburgh and imprisoned in the Tolbooth there. There was then a supplication by him to the Privy Council craving release that he was well known for his integrity and this mischief was plotted against him by a John Stewart (who was subsequently imprisoned for this offence) out of malice.

John Gordon was released after finding surety of 1000 Merks to answer when required any charge against him. The surety was supplied by James Sorbie, Merchant Burgess of Edinburgh and a James Kennedy. It is likely that James had moved up to Edinburgh from Galloway as John Gordon must have been a friend of his and he was from Stranraer. Also James Kennedy was described as "in Chapel" which is a place to the east of Stranraer.

Also, in the Record of Interments of Greyfriars Burying Ground, there are 4 mentions of James Sorbie, Merchant burying a child. On 10th September 1663, 7th January 1665, 5th January 1668 and 3rd January 1670. Greyfriars Church was where the Covenant was signed in 1638. After the Battle of Bothwell Bridge in 1679 several hundred Covenanters were imprisoned in Greyfriars Kirkyard. Many Covenanters were executed at the Grassmarket (where there is an upraised circular memorial marking the spot) a couple of hundred yards away and subsequently buried in Greyfriars. So there are Sorbies buried in Greyfriars amongst all the martyrs. Finally, there appears to be no record in the parish registers of the birth or death of James Sorbie. 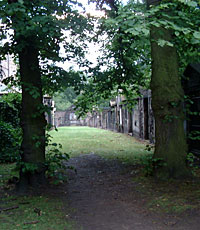 Covenanters Prison where captured Covenanters were kept in the Graveyard open to the elements until they were shackled and deported, or executed at the Grassmarket.

As a footnote, Greyfriars Kirkyard is reputed to be haunted. There have been stories in the press and on the radio in recent months about people on tours round the Kirkyard being scratched by an unseen "thing" and, in one case, being knocked out. And it all happens around the Covenanters prison.

Many thanks to Thomas Sorbie of London who has researched the above information.

Extracts taken from the Register of the Privy Council of Scotland and numerous publications of the Scottish Record Society.