Let me continue with another history story, this time on Trongate.

The first thing to say is that we have one street which is split into 3 !!!. Trongate, Argyle Street, Lawrie Street. The Street leads to the River Avon and Public park which has a fine view of the Avon valley.

At aged 14 I worked every morning in a Grocers shop called Mackenzie's this shop was near the Horse shown on the photograph below.

My duties included Delivery boy riding a black painted bicycle with a basket to the front. One very stormy rainy day I had to deliver two crusty loaves to the last house in Lockhart Street, I put a canvas bag over my head and went like the clappers to the house. Out of breath I knocked on the door and when I put the unwrapped loaves on the kitchen table, one rolled off on to the floor. The lady said "don't worry son its for the dogs," there was me dripping wet out of breath all for dogs, and I had thought the bread was urgent.

In the back shop I had to scrape the large round cheese. First I had to unwrap the linen bandages, then with a scraper took the crust off the cheese, thereafter wheeled it through to the shop. After working I went straight to the school, I heard a few comments, "who is stinking."

The local Farmers were paid for chickens, I hung them up and plucked the feathers off. On occasions the chickens were covered with white maggots, at school I felt as if I was lousy. I was glad to get home later for a bath.

Another thing I did was swept up the old sawdust on the floor of the public side of the counter and spread new sawdust. No fancy floor coverings in those days.

Lawrie Street.  Has the lane that led to the former Railway Station, the line being closed about 25 years back. It also has a house which was the former police office and jail.

The Church you can see is the Paterson United Free Church and is a very fine building. 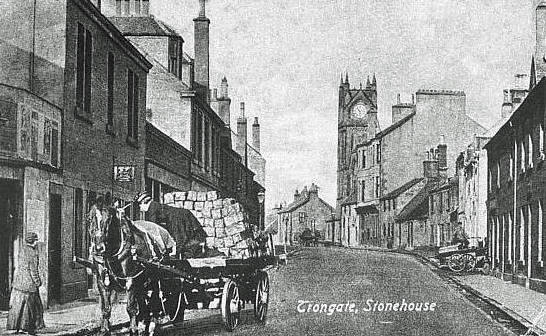 Jock the Jingler, a well known character in Stonehouse lived in a house through the Pend Close of the Bank Building, behind the horse and cart on the above photograph. Jock's real name was John Sorbie and he lived 1882 to 1941, the youngest son of James Sorbie and Helen Hamilton of 35, King Street. He was a real character, still remembered to this day. His actual trade as a young man was as a carter.

Jock must have been some man as it was a common saying to warned children if they did wrong by saying "If you don't behave I will get Jock the Jingler to you."  His arms and hands constantly shook, no doubt giving him the nickname Jingler Sorbie, he also had difficult speech.

What a lot of the villagers didn't know that Jock had served his country and came back from WW1 in December 1917. The medical notes on his discharge papers read "Spasm of muscles of right hand and mental stupor (shell shock)". They also record that he was "of good character during his service".

In tribute I have written this short poem :

Jock the Jingler,standing at the Bank close.

Waiting and blethering in his normal pose.

Jock’s voice was slow and for ever breaking

To small children his name would strike fear

Which was unfounded, as you will now hear.

Going over to France to help out the Frenchies.

Jock was injured in the WW1 Trenches

The damage to his mind is called "shell shock".

This small poem is for honour to our “ Jock".

I now add a poem was recently discovered by Local Historian John Young in an old copy of the "Hamilton Adverstiser" from 1928. No info other than the poem itself and the initials "H.C.". - Tom Sorbie, January 2008.

When mornin’ breaks, baith cauld and clear
Abune the sleepy toon
An’ no’ a body’s in the streets
An blinds are still pu’d doon
Yet at the Cross ye may be shair
Ye’ll find “The Jingler” staunin’ there

When mornin’ breaks,  baith murk and chill
Abune the sleepy toon
An’ sodden mists creep ower the hill
That lies ayont Westown
Yet at the Cross ye may be shair
Ye’ll find “The Jingler” staunin’ there

When mornin’ breaks, wi’ balefu’ blast
Abune the sleepy toon
An’ winter snaws are fa’in fast
An’ drifts hae formed a’roon
Yet at the Cross ye may be shair
Ye’ll find “The Jingler” staunin’ there

When e’en has cast her sombre cloak
Abune the sleepy toon,
An’ midnight’s struck on the auld toon clock
An’ folks are sleepin’ soon
Yet at the Cross ye may be shair
Ye’ll find “The Jingler” staunin’ there

Argyle Street. This is where the Rex Cinema is located (now closed) it is the white building in the background of the more up to date photograph below. The interior of the cinema was furnished with wall linings and fittings removed from a German Transatlantic Liner and is sumptuous.

The other thing Argyle Street is famous for is that I was born there 65 years ago !!!!

When Tom and Martha Sorbie's house burnt down (see 'Famous Sorbies') they moved to Argyle Street. We were at the same address which was a 4 in the block all having 13 Argyle Street as the address. The postman delivered by the Family name in the four block.

However when Tom bought the house on the other side of the close that put two Sorbie Families at the one address! To make it more confusing that made two Tom Sorbies. We opted then to change our address to 13a, I wonder if it's continued? I didn't have a nickname like a lot of the Sorbies.

Trongate.  This is the location of the Post Office and has been in the same area for around 150 years.

Trongate as it appeared in the 1950's

Many a pleasant journey I had as a boy in the black car on the right, it was owned by a friend's Dad. The photograph of Trongate was taken from the Cross, with a fine view of the Black Bull Hotel.

There is not much more I can add but I am sure the streets would be able to tell a number of stories on the happenings over the years.