I thought I would let you see Green Street and relate what I know about this Street.

You will see that it has a tidy appearance, I guess due to the lack of cars, and to the right is a typical hand loom weavers house with two windows to the left (weaving shop) of the door, and to the right one window (living accommodation)

The weaving shop had a French designed loom (Jacquard) with stone /earth floors, and the living room had a similar stone / earth floor with set-in box beds, to the rear of the house was a back kitchen in some houses. Dry toilet in the garden.

Although the had no front gardens the back garden was large, where the grew vegetables, and fruit to supplement their income.

The last loom in Green Street was working infrequently by two old men during the last war, I remember seeing the loom operating when I visited the house.

Top left of the Street is a common drying green where the Street got its name, and I believe there was a well in the green. On the skyline to the right is the Paterson United Free Church with the "Town Clock" and is located in a Street called Trongate. The Church with the steeple was demolished in 1954 when the congregation joined with the Church of Scotland.

At the top of Green Street is Greenside, where there is a former old two classroom School.

Number 18 Green Street is where my Great Grandfathers house was located. 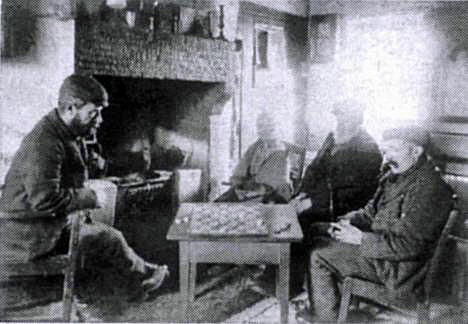 The photograph above is typical of the living room of a Weavers house, with the open fire.

This is the type of fire we had in our house for a short time.

I pulled out a number of this type, the stone mantelpiece was one large stone which was levered out and fell on to the hearth stone with something to break the fall, the two Mullions or upright stones could not be removed they had to be chiselled to just past the wall face. You could stand inside the fireplace and looking up, the flue tapered in as it was rising, the hearth stone was left as long as it was level with the floor, the opening was bricked up and a tiled fireplace fitted. Never found any money, I know it was the done thing to lay coins over the windows and doors.

I see they had a bottle of “Something” on the mantelpiece, calendar? and clock on the wall. Net curtains, and floral wallpaper.

Adjacent to the larger of the two storey block of houses in the Street is a large communal drying green and in my boyhood days the washing was done at the back of the block in washhouses with a coal fired boiler, mangles and scrubbing boards all used to clean the clothes, the washing was carried out in wicker baskets to the clothes lines. 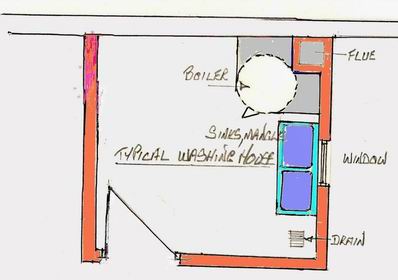 The cleaning process was to place the clothes and water into the cast iron boiler, boil for a length of time,  then removing the clothes with large wooden tongs, either into a wooden movable tub called a "Bine", or deep sinks adding the boiled water and thumping them with a large wooden "dolly" about 3 feet in height (very much like a potatoes masher) in earlier days they used their feet to tramp the clothes. 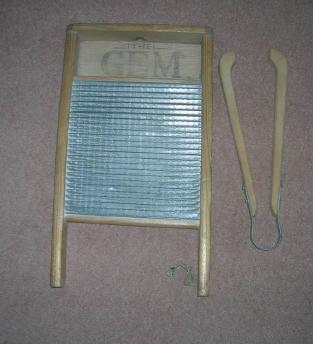 The scrubbing board was placed in the sink during Wash Days. The hot clothes were rubbed up and down the ribbed board to get them clean, the one shown is a small board. The Tongs were used to lift hot wet clothes from the bine [or tub].

The clothes while still warm were scrubbed on a scrubbing board, then into cold water before going through the manually turned mangle, placing the clothes etc into the wicker basket for hanging on the lines. 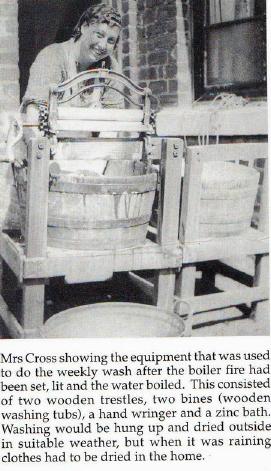 The whole process produced a great deal of steam which ran down the walls and poured out of the window. Hard days for the womenfolk, however they did a lot of blethering while waiting on the wash. 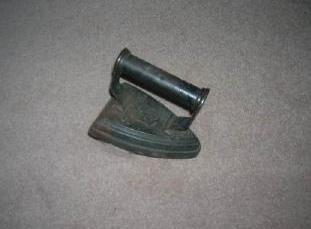 Old iron used before we had electric irons, warmed up on the gas ring or fire.

Finally, I attach a photograph of Tam the Beam who  as far as I know a Beamer was not a weaver , I think he prepared the "wab".

The Stonehouse weavers were mainly making silk scarves, handkerchiefs, and some of their work can be seen in Low Parks Museum, Hamilton .