The featured photographs are of Stonehouse Cross which has had very little change.

The road with the two carts goes west to Strathaven (4 miles), and was a turnpike road linking Edinburgh in the East to Ayr in the West, and the city of Glasgow, the first road to the right was a staging post, you will note no Tarmacadam (Blacktop)

Photograph 1 shows the road to Larkhall (approx, 3miles) and it also now leads to the present M74 Motorway over the Cander Water and gorge.

The White house in the background was owned by a family of Sorbie's nicknamed "Jingler" (it was common to nickname Sorbie families as there was quite a number, some with the same Christian names). 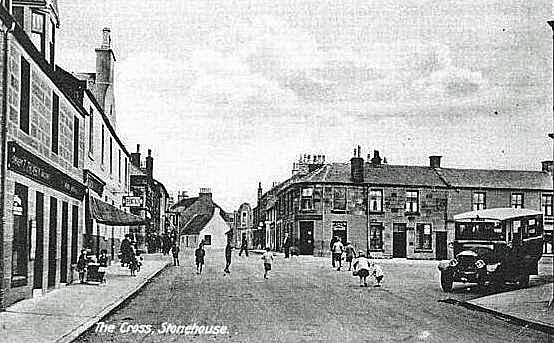 The larger building adjacent to the white house coming towards the Cross, was the first Picture House (Cinema) in the town.

Stonehouse Cross was used for Feeing Fairs, where farm workers would pay a fee to the farmers to take them on for a year, there were also other attractions to see in the Cross during the fairs.

My recollection of the cross is political meetings, and playing in an Air Raid Shelter built in the middle during the war, with bonfires being lit on top of same on VE & VJ days at the end of WW2..

Union Street also goes off from the Cross.  Part of Queen Street near the Cross was at one time called Puddock Lane as there were so many puddles of water full of Frogs (Puddock is Scots for Frog).

The Black Bull Hotel where the cart is sitting is still in use as a pub/hotel. 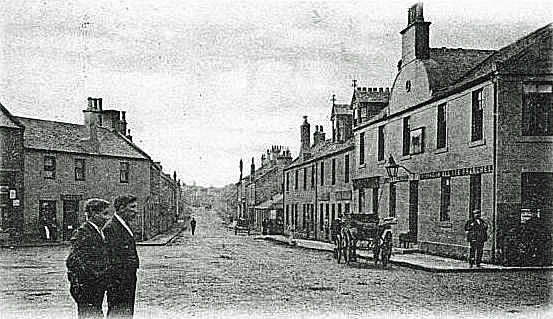 The house directly behind the two men standing was a shop owned by the Gray family.

44 descendants of this family living in the States have published a book "The Grays of Stonehouse Cross" written by John Gray the third. I am not sure if the Sorbies have any connection, their family tree shows Poore, Massie, Baird, Tudhope and Scott.. They have  Presbyterians Ministers in the family. The Massie and Poor's were 'well to do' families living in Manchester around 1845. One is James William Massie DD Manchester 1847, with an engraving in the book from an oil painting by Willie Westcott.

I append a humorous story from the book:

"..In the early times before bathrooms were invented, a china utensil under the bed was used after dark, or when it was to stormy to visit the permanent fixture which, together with the underground water cistern was located outside at the rear. This utensil was referred to by middle-aged ladies as "Miss White" (this with a wicked leer) and, by the lesser refined as the "po" or other terms unprintable. (I shall opt for the lesser refined.)

It was also the custom before retiring for the night to place the utensil on the step outside the door. The belief, even among medical men of the period, was that to do otherwise was to foster disease of some sort.

One night the Gray laddies collected all the "pos" in the immediate area and piled them up carefully in a pyramid in the centre of The Cross. This was, and still is a wide open square in the centre of the town, where farmers could display their surplus produce.

Next morning the Gray laddies stood on the pavement (sidewalk) outside their home and laughed uproariously as the ladies, pink with embarrassment, appeared to collect their cherished property.."