Another street in Stonehouse this time Lawrie Street, which I mentioned earlier and is an extension of Trongate / Argyle Street.

This photograph has been taken from the railway bridge looking towards Paterson Church. The road drops from the bridge down the Linthaugh Brae to the River Avon. The bridge has been removed and a new bridge has been constructed which takes the bypass road following the old railway line. 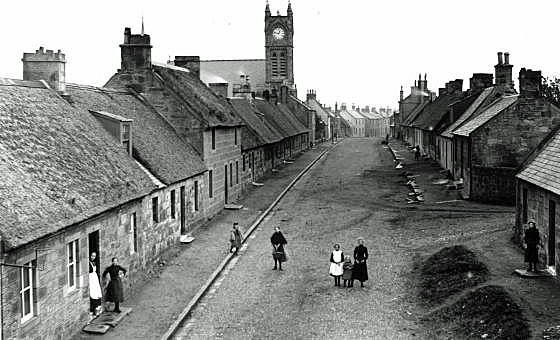 In Local Historian John Young's book he refers to Lawrie Street being the 'New Toon' and was called Laurie Street after a well known worthy James Laurie who lived in the parish in 1696, an Elder of the Church. To the left of the Church was the Former Police office and Jail, the building now a house remains and is in good condition.

Opposite the Church on the corner of Lawrie Street and Hill road was a two storey building, at a ground level a shop, the back shop being in Hill Road with a high wall which ran down Hill road about 20 feet (6Metres). The owner of the shop was an old man. Frequently boys would take empty bottles in to get a penny on an empty bottle, they then climbed the wall lifted empties, back over the wall and went back round to the front shop to get the money again.

In the photograph the thatched houses on the left are typical weavers houses with two windows a door and a single window.

The lane to the right on the photograph is the access to the former railway station and I can still smell the steam trains, they had a distinctive pleasant smell. This would be where most of the Sorbies started their long journey to other parts of the world.

My father being a pigeon fancier took me as a boy to the railway yard to see the pigeons that had come in by train being "liberated" from the wagons. It was quite a sight to see hundreds of birds flying off. After the pigeons had left the baskets I went along and collected any eggs that had been laid. I brought them home and after pouring the contents of the eggs into a bowl I added milk, sugar and a little salt whisked it up and drunk the eggs raw, a lovely drink.

During the War where the bridge that now holds the by-pass is located, there were a number of large concrete shaped barrels about 1.2m in diameter by 1m in height. It was intended to roll these to obstruct the roads should an invasion take place. 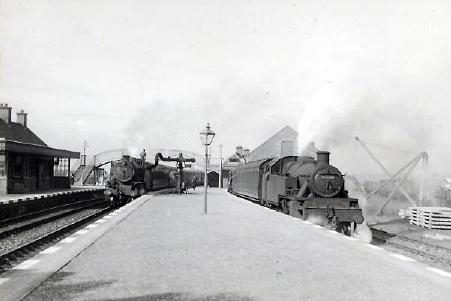 I also as a paper boy went to the Station, from memory 6am to collect the bundles of papers and brought them by bike to Camnethan Street, Wiseman Newsagents.

The Linthaugh Brae skirts the side of the large Alexander Hamilton Memorial Park, which was a gift from this former native in May 1925 who made his fortune in Kidderminster. The brae crosses over the Avon at Linthaugh Bridge which was built in 1772 and is a beautiful setting, where I spent many happy hours at the rivers edge. 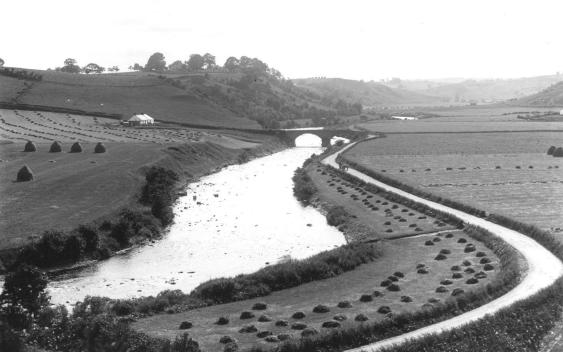 Here is Linthaugh Bridge in the early 1900's, looking back from the other side of the Avon. High up on the hillside is the old St.Ninian's kirkyard. In the middle distance to the left is Linthaugh Farm where I used to watch the steam driven threshers. Between the two is the location of the Alexander Hamilton Memorial Park which was later established in 1925. You can see a good picture looking from the other side of the bridge in 'Short History Number 11'.