Here is another old photograph and it shows New Street, or at one time called Newtown Street.

This street is an extension of Lockhart Street ending at Stonehouse Cross, and is the road you would take to go to the new Motorway or east.  The first cottage on the right has long since gone, with the lane to the right being widened now leads to Boghall and Camnethan Streets.

Up the street a little, still on the right hand side was my grandparents house number 32, and many a night during the last war I had to see my grandmother home by shining a torch so that she didn't trip in the Blackout.

My Grandfather kept prize Dutch rabbits as a hobby and was known as Rabbit Tam, I also remember a tame blackbird in the house that could whistle a tune.

To the left you will see the Thistle Inn where my Grandfather quenched his thirst most evenings spending about a half hour then home, I also knew the inside of all the pubs in the town being a paper boy. In these days the pub floors were covered with sawdust and spittoons a bit like the Wild West, and never endeared me to frequent pubs thereafter.!

You will see again houses with thatched roofs on the left which are long gone, the front walls only were standing when I lived there with a builders yard behind, a little way up was the Miners Welfare Hall, now the Public Institute where in my youth I spent many evenings playing snooker and billiards.

The story is about an Italian called Johnny Paccitto, a well known character who lived opposite the Miner's Welfare in New Street just after the War. I was often in his shop "The Cross Café" as my grandmother lived a few doors down. Johnny lived by himself and was good at making meals, cakes etc.

He made a pie for sale, while Johnny was doing something in the back shop, half of it was eaten by a greedy male neighbour without paying for it.  Having found out who it was he made another cake and this time he covered it with thick "Laxative Chocolate." Johnny then encouraged the neighbour to eat it up as he was not going to sell it, having devoured over half of it he went home. The greedy thief was off work for two days.!!!!! 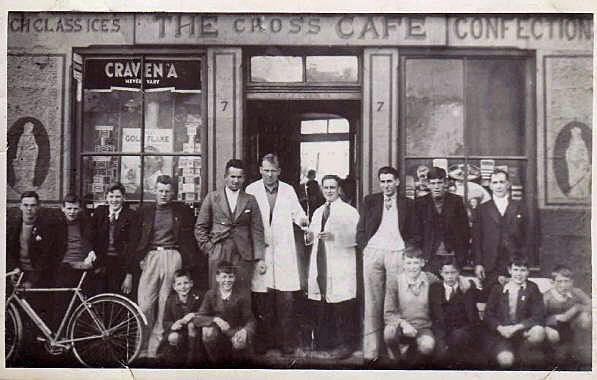 I think the photo is around 1938/9. Johnny is the small man with the white coat, the other is a man who helped him at times. He was interned during the War.

Ice cream cools the bellie on a warm day.