and their meeting with Helen Keller

Thomas Sorbie, born Feb 11th 1830, was the eldest son of Thomas Sorbie and Mary Currie. When he married Ann Wilson in November 1853 he moved to 40, Camnethan Street, Stonehouse. Their first son, born March 11 1857 was named (as is tradition) Thomas after his father. On December 7th he married Isabella (Bella) Cain in Stonehouse. Bella was the daughter of John Cain, an Irish immigrant and Sarah Askmuir who was from Airdrie, Lanarkshire. The Cain family had moved around and in the 1881 Census they were living at Waterside Farm, Mearns, Renfrewshire.

On 28th May 1888 Thomas Snr. died in an tragic accident in the house. It was being used for Handloom weaving and Thomas fractured his skull in a collision with a ladder, dying shortly after. Three years later, in the 1891 Census, son Tom, wife Bella and their five children were also living in the house along with Thomas's widow Mary and three of their children. 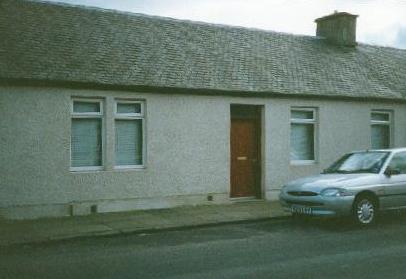 Thomas and Bella's eldest son, Thomas was born in 1886. The weaving industry in Stonehouse was now dying and when he left school at the turn of the century he became a coal miner. Just before the outbreak of the First World War he married Martha Wilson Gray who was born in 1896 and so ten years younger than Tom. 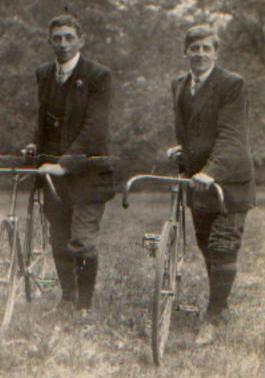 In his youth Tom who later married to Martha, worked for a number of years in the thriving coal mines of Northern Alabama, U.S.A., alongside a number of other Scots who had crossed the Atlantic looking for work and the lure of higher wages. This was a boom time for mining in this part of America when coal was being brought up from the ground in thousands of tons, but conditions were still extremely dangerous. 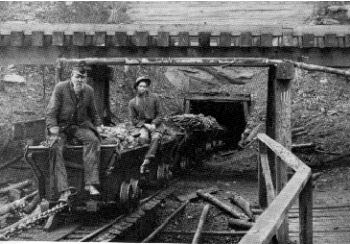 Miners at a coal mine near Birmingham, Alabama, 1915

"Mine Explosion At Helena Takes Toll"

"..An explosion that took the lives of 27 men, 11 white and 16 colored, occurred in the Mossboro mine of the Premier Coal Company near Helena Friday afternoon about 4 o'clock. Sixty men were at work in the mine. The explosion was caused, most of the survivors stated, by an charge of black powder that blew backward and in the misfiring set off the coal dust. It is said to have been very severe and most of the men were believed to have been killed instantly.

The work of removing the bodies of the dead men required practically all Friday night. The blast loosed a pond of water that flowed into and filled the pit, making the work of the rescue all the more difficult. For hours the crew worked in water waist deep among heaps of fallen stone and twisted steel to find the badly mangled bodies of the dead men. Several of the men, it is said, had been at work in the mine only a week. Some of them were in the Overton mine on December 11 when an explosion took the lives of 53 men."

"Time Magazine" recently voted Helen Keller as one of the 'Top 100 Heroes and Icons of the 20th Century". 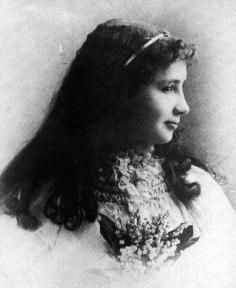 Helen Adams Keller was born a healthy child on June 27, 1880, to Captain Arthur H. and Kate Adams Keller of Tuscumbia, Alabama. At the tender age of 19 months, she was stricken with a severe illness which left her blind and deaf. At the age of six, the half-wild, deaf and blind girl was taken by her parents to see Dr. Alexander Graham Bell. Because of her visit, Helen was united with her young teacher Anne Mansfield Sullivan on March 3rd, 1887.

Shortly afterwards, at a plain, black well-pump one of the world's great miracles took place. It began one bright, spring day. Puffy white clouds floated overhead on a background of blue, while birds fluttered through oaks and maple flowers burst forth from the fertile soil in an array of colours -- all unheard and unseen by a pretty girl of seven.

Standing at the totally blind and deaf Helen Keller's side was Anne Sullivan. Miss Sullivan was steadily pumping cool water into one of the girl's hands while repeatedly tapping out an alphabet code of five letters in the other - first slowly, then rapidly. The scene was repeated. again and again as the young Helen painstakingly struggled to break her world of silence. 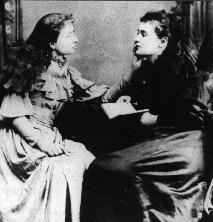 Suddenly the signals crossed Helen's consciousness with a meaning. She knew that "w-a-t-e-r" meant the cool something flowing over her hand. Darkness began to melt from her mind like so much ice left out on that sunny March day. By nightfall, Helen had learned 30 words. After Helen's miraculous break-through, she proved so gifted that she soon learned the finger-tip alphabet and shortly afterward to write. By the end of August, in six short months, she knew 625 words. 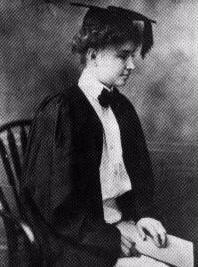 The teacher stayed with her through those years, interpreting lectures and class discussion to her. Helen Keller, the little girl, became one of history's remarkable women. She dedicated her life to improving the conditions of the blind and the deaf-blind around the world, lecturing in more than 25 countries on the five major continents. Wherever she appeared, she brought new courage to millions of blind and disabled people.

Her teacher, Anne Sullivan, is remembered as "The Miracle Worker" for her lifetime dedication, patience and love to a half-wild southern child trapped in a world of darkness.

In  December 1936 Helen was in Glasgow as part of a tour of Europe and was visiting the Parish Minister of Bothwell, Mr R.J. Thomson, the brother of her friend and companion, Polly Thomson (see below). Martha Sorbie's sister Jean Gray worked in the Manse of St. Brides church (Minister's residence) as part of the domestic staff.

Helen wanted to visit a Scottish home and went with Jean to visit her sister's house at 55, Lockhart Street, Stonehouse. 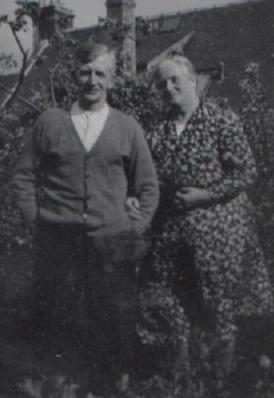 Her visit was later described in her book "Helen Keller's Journal". Isabella Sorbie, Tom and Martha's daughter recalls how her father kept poultry and Helen held one of his chickens which she stroked gently. 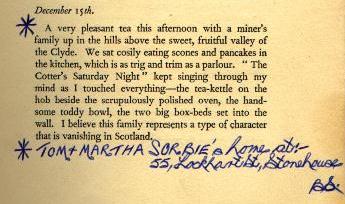 Later that year Helen was kind enough to send the Sorbies the following Christmas picture that shows her at home in her garden in Alabama.

It reads at the bottom, "To Mrs Sorbie, with cordial Christmas wishes. Helen Keller Christmas 1936." 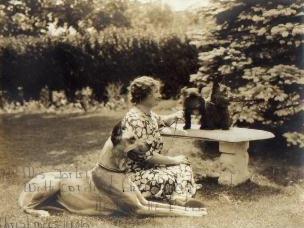 Helen Keller's greater achievement came after Anne Sullivan, her companion and protector, died in 1936. Keller would live until 1968 and in that time would prove that the disabled can be independent. She disliked the word "handicapped". She was once asked how disabled veterans of World War II should be treated and said that they do "not want to be treated as heroes. They want to be able to live naturally and to be treated as human beings." 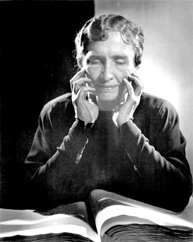 In 1959, the story of Helen's life, "The Miracle Worker" appeared on television. It is later adapted for the stage and film. Those people whose only experience of Helen is through her film portrayal will be surprised to discover her many dimensions. "My work for the blind," she wrote, "has never occupied a center in my personality. My sympathies are with all who struggle for justice." She was a tireless activist for racial and sexual equality. Her main message was and is, "We're like everybody else. We're here to be able to live a life as full as any sighted person's. And it's OK to be ourselves." 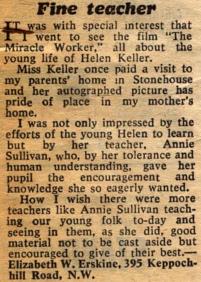 Letter written by Lizzie (Sorbie) Erskine to the local newspaper

Helen died jut before her 88th birthday on June 1, 1968, in Westport, Connecticut.

THE FAMILY OF TOM AND MARTHA

Tom and Martha Sorbie had three children, Elizabeth, born in 1916, Isabella in 1920 and Thomas in 1927. Thomas was the 6th consecutive son to bear the name in the family, going back to Thomas Sorbie, born May 14th 1771, the son of John Sorbie and Grizel Millar. The family continued to live at 55, Lockhart Street, until it was unfortunately destroyed by fire in 1956. Tom and Martha then moved to Argyle Street, Stonehouse. 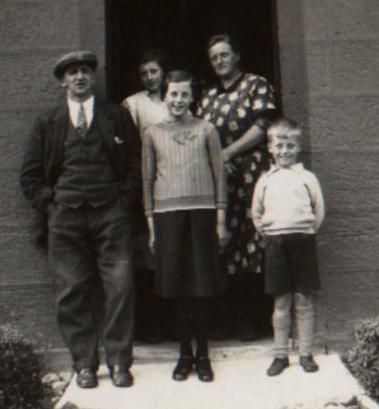 Tom Sorbie and family in 1932. Children are Lizzie back, with Bella and Tom front

"Sorbie Drive" a modern street in Stonehouse was named after Tom, who was a long standing member of the 'Independent Labour Party', the fore-runner of the modern day Labour Party. 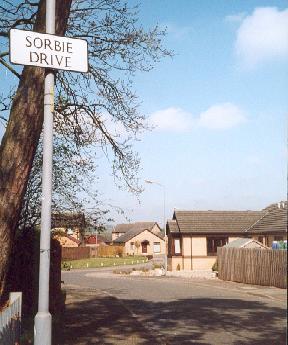 The honour was bestowed due to the amount of work Tom did for the betterment of the community and his fellow townsfolk. 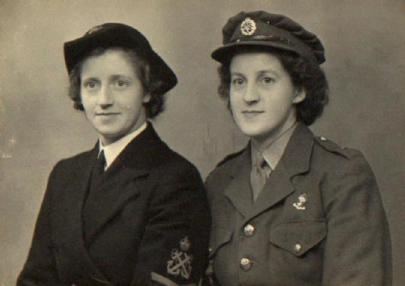 Elizabeth and Isabella Sorbie during the war years

During WWII their daughter Elizabeth was a Petty Officer in the WRENS (Women's Navy) and Isabella was at an Ack--Ack (Air Defence) site at Hackney Marshes, London. Elizabeth married George Erskine and had a son, Thomas. George Erskine was a telegraphist on board the Gardenia during the war, was torpedoed, he dived into burning fuel floating on the sea, and was rescued later by an American ship. Isabella never married.

Their brother, Tom was a leading stoker on the "Cleopatra", and was at the surrender of the Japanese in Singapore in 1945. After the war he became a policeman, but was injured and left the police force and opened two shops in the Bishopbriggs area of Glasgow.

The 'Cleopatra' berthed in Singapore

Tom married Marion McIntosh and they had one daughter, Elizabeth McPherson Sorbie. Elizabeth is very talented. She was a singer with the Scottish Junior Singers, was on B.B.C. Scotland "Fireside Sunday School", and won a British award for handwriting, aged 11. She was also Dux Medallist in Auchinairn Primary School  (Dux, in Scotland is the best pupil in that year). 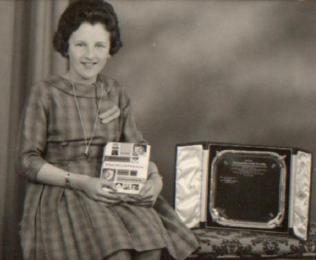 Elizabeth Sorbie with her school prizes 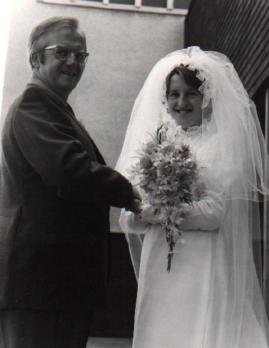 Tom with daughter Elizabeth at her wedding 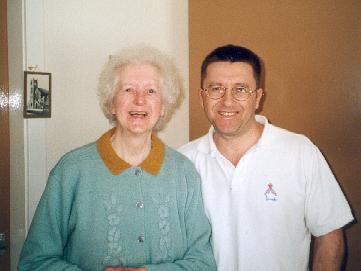 Isabella Sorbie and your 'web editor' Andy Potts  in May 2001