Construction begins on the bridge itself - April 2001

A new road bridge offering a gateway to the Clyde Valley opened to traffic on 31st January 2002. The £6.6m Garrion Bridge Improvement Scheme in South Lanarkshire, near the village of Overtown, was built using £2.5m from the Scottish Office's Transport Challenge Fund. The Bridge and surrounding improvements are intended to ease congestion in the area and open up this important route further to tourists, commuters and commercial traffic. This bridge and improvements to the road network has already made a real difference to road users in the Clyde Valley. The A71 and A72 are vital links for the towns of Lanark and Biggar as well as the world-renowned New Lanark Heritage Village. 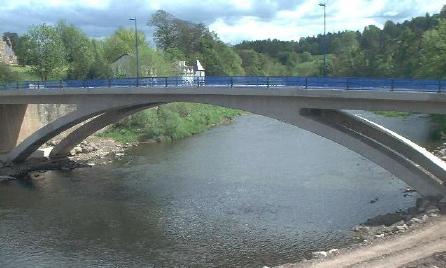 The impressive span of the new Garrion Bridge

Transport Minister Lewis McDonald said "The Garrion Bridge will contribute to ensuring the economic viability of the Clyde Valley by easing the transport of goods and services to and from the area and also by ensuring the A72 and the A71 continue to be important tourist routes." The scheme had finally been given the go-ahead on 25th May 2000, with the 'Hamilton Advertiser' sporting the headline "Bridging gap to end traffic nightmare".

The Improvement Scheme included the building of a single-span reinforced arch bridge over the Clyde, 50 metres upstream of the existing Garrion Bridge and the construction of a new link road from the A72 Clyde Valley Road up to the A71 at the top of Cornsilloch Brae. In addition a new roundabout was built on the A71 at Cornsilloch Brae at its junction with the realigned A72. 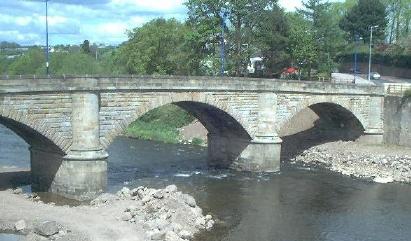 The old Garrion Bridge, built in 1817

The A72 is the main route for the Western side of the Clyde Valley and links to the major towns of Biggar, Lanark and the New Lanark World Heritage Village. For the past 20 years the area has been a notorious bottleneck. Single lane traffic has operated across the old Garrion Bridge, protecting the structure but contributing to major traffic delays. The old bridge now forms part of a new fast flowing roundabout system together with the new bridge.

Local Councillor John Pentland commented "I'm delighted the bridge has finally opened as it will bring some regeneration to that side of the valley. "I would especially like to thank the local community for having the patience to persevere with everything during the construction period. It has been a frustrating time for them."
"They have had to put up with a lot, but now that the roads have been improved, they should act as a spur to help with the regeneration of the area, and alleviate the traffic problems in the area." 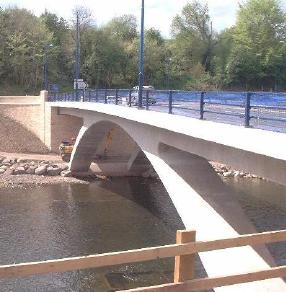 Another aspect of the new bridge.

Many thanks to Tom Sorbie of Larkhall for the above photographs.