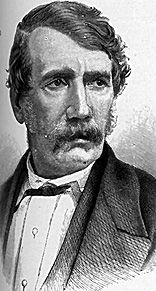 David Livingstone was born on March 13, 1813 in Blantyre, Lanarkshire, 8 miles south of Glasgow. He grew up in a distinctively Scottish family environment of personal piety, poverty, hard work, zeal for education, and a sense of mission.

His parents, Neil Livingstone, a tea salesman and Agnes Hunter were married in Blantyre, on 2nd December 1810.  His father's family was from the island of Ulva, off the west coast of Scotland. His mother, a Lowlander, was descended from a family of Covenanters, a group of militant Presbyterians. Both were poor, and Livingstone was reared as one of seven children in a single room at the top of a tenement building called "shuttle row", built for the workers of a cotton factory on the banks of the Clyde. At the age of 10 he had to help his family and was put to work in a cotton mill. The bell which beckoned him to work a 6 a.m. and held him captive until 8 p.m. each evening is still attached to the side of Shuttle Row.

Even at this late hour Livingstone’s work was not yet over. Along with the other mill children he attended night school. Some were so tired that they could do little else but sleep but Livingstone studied hard, often until very late at night. Livingstone’s Christian upbringing prepared him to respond to an appeal by the Chinese Missions and he was determined to become a missionary to China. In 1836 Livingstone embarked upon a medical degree at Anderson’s College in Glasgow. Here he studied throughout the winter months returning to the mill in summer. However, his original plan to become a medical missionary to China was thwarted by the outbreak of the "Opium War" (1839-42) which closed China to him. 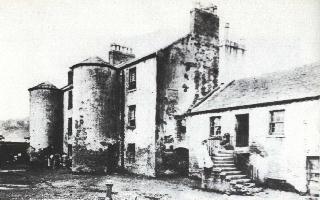 A 1910 photograph of the house where Livingstone was born

During his studies he attended a meeting addressed by Dr Robert Moffat, a fellow Scot home on furlough from a mission station at Kuruman, 500 miles north of Cape Town. Livingstone heard of the vast untouched regions of Central Africa and the 'smoke of a thousand villages' where the Gospel had never been preached and soon his thoughts were turning to the great uncharted continent of Africa.

At the end of 1840, at the age of 27, under the auspices of the London Missionary Society, Livingstone set sail for Africa on board the sailing ship 'George'. On arrival in Cape Town on March 14th 1841, Livingstone made his way by ox-wagon to Dr Moffat’s mission station at Kuruman. While Moffat confined his work to the region around Kuruman, Livingstone felt compelled to venture north into the unexplored terrain of Central Africa. Isolating himself for several months in a native village many miles from Kuruman, Livingstone sought to hasten his comprehension of the language and customs of the Africans. Above all his aim was to treat them with respect.

He became a doctor and a missionary, and devoted much of his life to exploring Africa and spreading the Christian gospel.  Livingstone was one of the first Europeans to explore the central and southern parts of Africa. He decided that the best way to teach Africans about Christ was to move about and see as many people as he could. This is how he became an explorer. He married Dr Moffat's daughter, Mary in 1845 and she (and later their children) came along with Livingstone on his early explorations. In 1849, he led a group of Europeans across the Kalahari Desert and discovered Lake Ngami. Two years later, he again travelled through the Kalahari with his family. 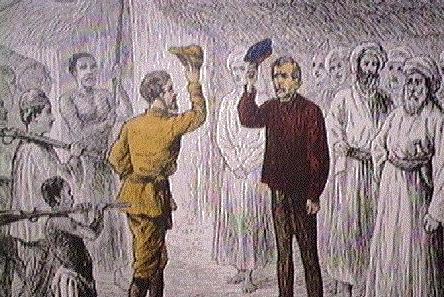 These accomplishments made him very famous in England. He wrote a book about his experiences in Africa and travelled around the country giving speeches in 1856 and 1857. Livingstone went back to Africa in 1858 and is credited with the discovery of Lake Nyasa in 1858, the Chilwa River in 1859, and more of the Nile River. In 1866 David Livingstone went on an expedition funded by the Royal Geographic Society to seek the source of the Nile River. While on this expedition he appeared to be lost and no one had heard from the intrepid explorer. In 1871, the New York Times commissioned the journalist, Henry Morton Stanley, to mount an expedition to locate him. When he was finally found, at Ujiji on Lake Tanganyika on Nov 10th 1871, Stanley addressed him with the famous words, "Dr. Livingstone, I presume.?"

The arrival of supplies, medicines, news and a kindred spirit greatly refreshed the ailing missionary. However, refusing Stanley’s offer of passage home, Livingstone once more bid farewell to Western companionship and ventured south down the east banks of Lake Tanganyika and Bangwelu. Deteriorating health, exacerbated by swampy terrain and torrential rain resulted in his followers carrying him as far as Ilala where, at the village of Chief Chitambo, they built a hut for him to rest.

At 4 a.m. on 1st May, 1873, Livingstone was found on his knees by his bedside, having died in prayer. In accordance with the tribe's beliefs, Livingstone’s heart was buried under a Mvula tree near to the spot where he died; but his body had to be returned to Britain, along with his personal items and papers. This epic journey aboard the steamer 'Malwa' took almost a full year.  He was buried in Westminster Abbey in London on 18th April, 1874 which was declared a day of national mourning.

As part of his travels, David Livingstone learned more about African customs, geography, and the slave trade than any other European. His expeditions helped the world understand a great deal more about the 'dark continent' of Africa. David has a number of descendants, but none with the surname 'Livingstone'. This is because none of his three sons had any sons. A copy of his family tree can be seen on the Visitor Centre website shown on the 'related sites' page. 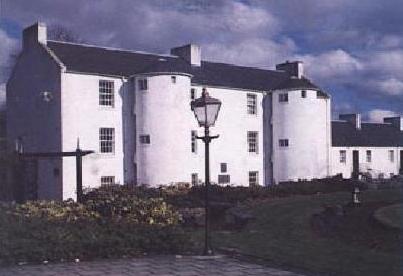 The David Livingstone Centre is located in the tenement where he was born and is well worth a visit.  The adventure of his life is dramatically illustrated, from his childhood in the Blantyre Mills to his explorations in the heart of Africa. A testament to his and his fellow missionaries' dedication is that Africa now has more than 250 million Christians, making Christianity the second most prevalent faith on the Continent.

The centre is open seven days a week and is situated at 165, Station Road, Blantyre.