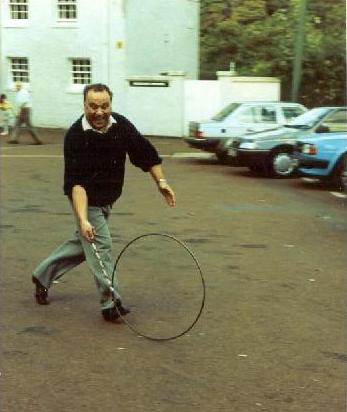 Looking back at some old photographs, I came upon the above.

It shows yours truly going back to his childhood, (photograph taken at Livingstone Memorial). The "cleek" I had made was not like the modern types, it was separate from the "gird", and pronounced in Stonehouse as a "Gur'n'Cleek." It was usually made by local blacksmiths.

There is a story of a certain Harry Dawson of Larkhall, a bit dim witted, who frequently ran through the local villages, pushing his Gird and Cleek, and one afternoon he was asked in for a drink in a Stonehouse pub. On arriving home late his mother said :- "Ye'r late the day Harry." "Aye mither a went in fur a drink in Stonehoose an when a came oot the pub somebody had stolen my Gur'n'Cleek , so a hid tae walk it. !!!"

We had Harry Dawson round the front, who ran carts cheek for cheek.

He is dead, poor soul; no more we will see his great big Gur and Cleek. 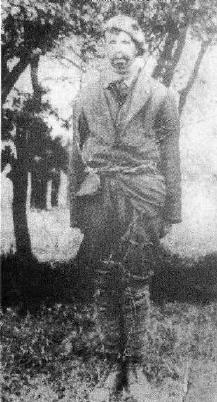 Here are a couple of wee smilers about Harry:

A man pulled up in his lorry seeing Harry running with his Gird and Cleek.

Harry was running behind a bus when it suddenly stopped and he fell against it.. Harry was seen kicking the back of the bus shouting.

Regarding the Gird and Cleek (spelling might be Kleek), the Cleek was the pushing part (as in cleek me in) which means take my arm in. It was a metal rod about 10 mm thick, a handle formed at the top by bending back the rod and at the bottom a "U" shaped  formed to push the Gird, which is the round circular hoop, again made from 10 mm steel rod. When pushed along the road it didn't half clatter. The local children used to do this for hours. Just out of interest, the other night on TV I saw some kids in Afghanistan playing with a Gird and Cleek. 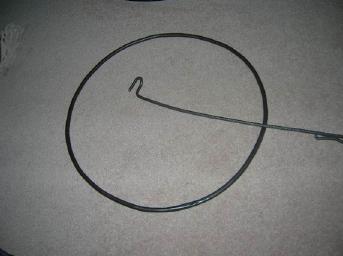 My childhood memories as far as games are concerned are not all that good, I see some of the sayings are still being used by my grandchildren. One word that was used when chasing, finding a person and touching that person was "your het", in English I would think it means "your hit".

One of the girls games was "Pever" or Hop Scotch and is still played in playgrounds today.

Chalked on the ground was squares in the shape of an aircraft the body had 7 squares numbered 1.2.3.6.7.8.9, and the wings were 4,5. The Pever normally a piece of marble or a filled tin would be slid by hand on to a square, the player hopped on one foot up the squares and had to jump over the square with the Pever. I can only assume that they went right to left as well as up the body The shape of a cross would be like an aircraft. 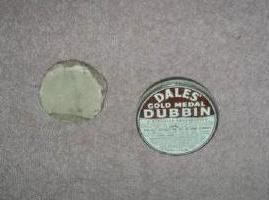 I was a great "Bools" player along the "Shuch" in the roads (Bools-- Marbles) (Shuch--the edge of the road where the water runs) at the Kerb.

We made "Dragens" (Dragons) as kites were known in Stonehouse,  the top was made from a grocery wooden barrel, and the remainder of canes, covered with brown paper, stuck with flour paste - no Cellotape in those days. The kites was painted with many colours water based paints, the tail was long, and tied on the tail was wrapped up bits of newspapers every few inches. We spent many pleasant hours flying the kites and sending messages up by slotting small pieces of paper on to the line, with the wind blowing it up the full height. I made one recently for my grandsons and it flies well. Now stored until the summer. 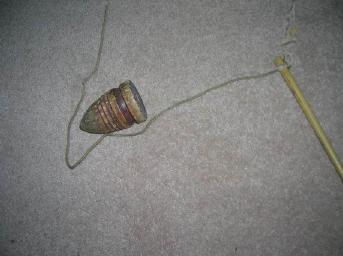 The Peerie was started spinning by rolling the string around it and pulling hard, then whipped to keep it spinning as long as possible. 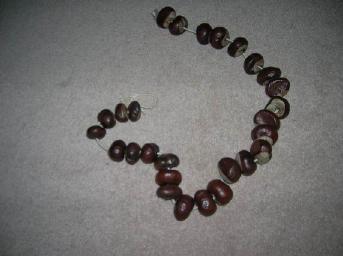 Conkers is played by threading a horse chestnut on to the string with a knot at the end. This keeps the chestnut from slipping off as one player holds the string vertically, while the other player whipping his string and chestnut to hit, trying to break the opponents chestnut. Children collect the Horse Chestnuts after they have fallen of the tree, stripping off the rough case to see the shiny conker underneath.

The longest lasting chestnut is the winner. I have also heard the game being called Chessies.

One other thing we made was Clappers, made from two flat bones or wood about five inches long held either side of the middle finger and rattled. You could get up to a good speed, and could be used as a musical instrument. 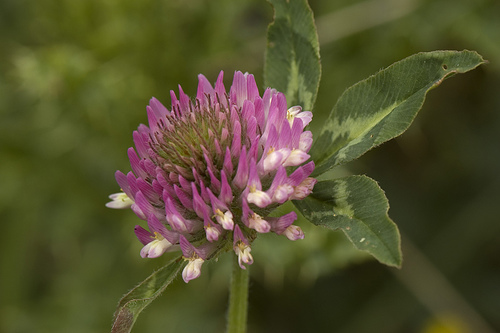 Today I was taking a walk through the Chateralaut Country Park and came upon a Ranger who was with a group apparently camping in the trees, with a fire going. I told him the smell of the fire took me back to my school boy days playing at the river side near Linthaugh Bridge, Stonehouse.

I went on to tell the Ranger that I used to "Snib Beardies" he had no idea what I was talking about which is the same answer as I get from locals. After explaining what Snibing Beardies was all about the Ranger asked me to contact the Park Director and pass this story onto as he thought it should be recorded. I have now done this.

The story was that we pulled up a plant growing on the bank about a foot in height which looks like a thistle from memory, possibly Trifolum Pratense, but not certain. This plant had long roots which were layered. After removing all roots but one, the root was paired down by fingernails to be thin enough to form into a lasso. The leaves were removed leaving a stock as a handle.

We sat on large boulders on the river banging them with a stone to bring out small Stone Loaches to encourage them to show at the edge of the boulder, when their head came out it was easy to slip the lasso over the Loach and pull it out of the river.