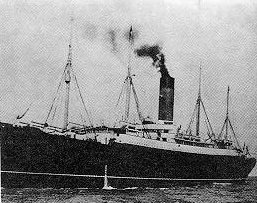 The Twin Screw Cunard steamship Carpathia was laid down at the Wallsend-on-Tyne (Newcastle, England) works of Swan & Hunter in 1901. She was launched on 6 August 1902 and, after fitting out, registered a gross tonnage of 13,603. She was 558 feet in length with a breadth of 64 feet 3 inches and depth 40 feet. Her eight cylinder quadruple-expansion engines installed by the Wallsend Slipway Co. gave her a service speed of approximately 14 knots.

On 5 May 1903 the Carpathia left Liverpool on her maiden voyage, travelling via Queenstown (Cobh, Cork) to New York. She plied the Liverpool to New York or Boston route in the Summer and, between November and May, she carried immigrants (mainly Hungarian) from Trieste and Fiume to America.  As well as providing essential immigrant revenue these summer cruises to Europe were particularly enjoyed by wealthy Americans on holiday with additional stops being made at the ports of Gibraltar, Genoa and Naples (sometimes including Messina and Palermo). In 1905 the Carpathia was refitted to provide accommodation for 100 first class, 200 second class and 2,250 third class passengers. By 1909 she was permanently assigned to the Mediterranean service, only returning to Liverpool at the end of each year for a refit. 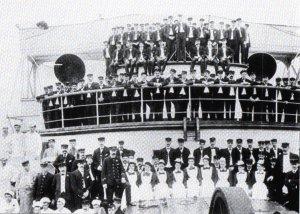 On 18 January 1912, Arthur Henry Rostron was given command of the Carpathia. Rostron was born at Astley Bridge, Bolton, Lancashire, England, on 14 May 1869, the son of James and Nancy Rostron. He was educated at the Astley Bridge High School. At the age of 13 he went to sea, joining the Naval training ship Conway. After two years he was apprenticed to the Waverley Line of Messrs. Williamson, Milligan and Co., Liverpool on board the Cedric the Saxon. His work took him to all parts of the world including the America, India and Australia.

Rostron passed the extra master's certificate in December 1894 and served as second mate aboard the steamship Concord to complete the certificate. Joining the Cunard Line in January 1895 he gained the position of fourth officer on the Umbria. It was in this capacity that he made his first visit to New York. In the years that followed he served aboard various Cunard vessels including: Aurania, Etruria, Servia, Cherbourg, Ultonia and Saxonia. Rostron was made first officer of the Luisitania in 1907, but just a day before departing on the maiden voyage he found himself transferred to the Brescia, in the Mediterranean trade, as Captain. Rostron worked the Mediterranean service for several years on such vessels as the Verria, Pavia, and in 1911, in his first command of a passenger steamer, the Pennonia on the New York - Mediterranean route.

After taking control of the Carpathia in early 1912, Rostron took her on the regular service between New York and Fiume in Italy. In those days it was common for steamers to carry emigrants from Europe to America and on the return journey, take holidaying Americans to the ports of Europe, therefore when Rostron guided the Carpathia from pier 54 out of New York on 11 April 1912 his vessel carried a large number of tourists among the 125 first class, 65 second class and 550 third class passengers.

On the night of 14 April 1912 Rostron was asleep in his cabin when wireless operator Harold Cottam burst in and told him of Titanic's distress signal. Captain Rostron immediately set course to the liner's last known position, over 60 miles away.

In order to prepare for what was left of the ship, he ordered several changes made to his own ship.

3. Stewards to keep the passengers on board separate from the survivors

5. Any extra rooms, including officers cabins prepared. Also the library and smoking rooms.

7. Rope ladders, and extra chairs used as swings to pick up survivors

8. Pursers and some stewards would take the survivors names and send them to a room

9. A doctor would turn each dining room into a hospital

Captain Rostron did an even more braver feat. His ship could only travel a speed of 14.5 knots, and therefore would reach the Titanic in over 5 hours. Rostron ordered all hot water, steam and other heat sources cut off as to make the boilers work faster and build more power. Not only was this action brave but dangerous as well. He was going more then full speed through an icefield. Because of this he posted several lookouts on watch. This was a good decision as the Carpathia in total passed 6 bergs. 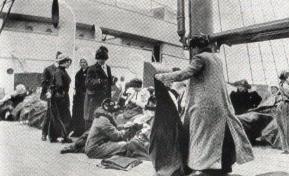 At 4.00 a.m. the Carpathia arrived at the scene after negotiating surrounding ice fields and began picking up the survivors and lifeboats from the Titanic. The first boat to come aboard was boat number 2 at 4:10 am. The last boat was boat 12, which had so many members the sides were a few inches from the water. However the occupants finally came aboard at 8:30 am. All hurt people were sent to the hospitals and the others were given food and drink. 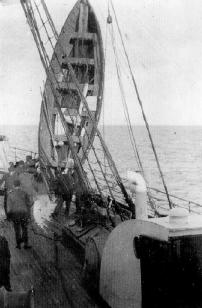 Lifeboat #12 - the last to be rescued, being drained aboard the 'Carpathia'

712 people were saved and 1,503 perished. As there were insufficient resources on board to make it to Europe, Captain Rostron decided to sail back to New York. When the vessel arrived the full horror of the Titanic tragedy was learnt. Carpathia finally reached New York late on Tuesday the 18th of April. First she lowered the Titanic lifeboats, then the passengers stepped off. This was all that was left of Titanic. After the last survivor had disembarked and Captain Rostron had completed his statement for the US Senate inquiry the Carpathia returned to its usual service.

For his rescue work in the Carpathia Rostron was awarded a silver cup and gold medal by survivors, the presentation was made by the campaigner and activist Molly Brown. He was later received by President Taft at the White House, Washington, and presented by him with a letter of thanks signed by the President, and a few months later he was presented by President Taft with the Congressional Medal of Honour, the highest compliment the United States could confer upon him. 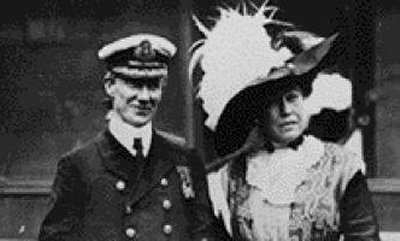 Captain Rostron receives the thanks of Titanic survivor, "The Unsinkable" Molly Brown

In fact the whole crew of the Carpathia were all awarded medals by the survivors. Crew members were awarded bronze medals and officers silver. After the loss of 'Titanic' the first and second class passengers formed a committee to raise a general fund - to aid destitute third class passengers, to present a cup to Captain Rostron of 'Carpathia' and medals to her crew. Molly Brown (Margaret Brown 1867-1932) chair of the committee presented the awards. 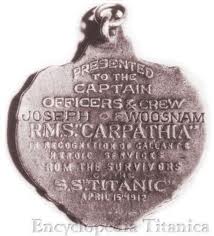 The Carpathia continued its commercial service throughout the war, first operating from Piraeus in Greece and then, in 1915, being transferred to the New York and Boston run from Liverpool.  She was never converted into a troopship although she had been designed to enable conversion to carry up 3000 officers and troops with 1000 tons of stores, or 1000 officers and men when transporting cavalry.

On 17 July 1918 the Carpathia was travelling in a convoy, bound for Boston, when she was struck by two torpedoes some 120 miles west off Fastnet, Southern Ireland. A third torpedo hit the ship as the lifeboats were being manned. Five of the crew were killed by the explosions. The remainder of the crew and the 57 passengers on board were picked up by H.M.S. Snowdrop and safely brought to Liverpool. The Carpathia sank at 12.40am that day. After a year in command of the Carpathia Rostron was transferred to the Caroniain 1913. Between then and the end of WW1 he would also take command of the Carmania, Campania, Lusitania and Aulania and finally the Mauretania at the end of 1916. In 1917 he took the ship to the Tail-of-the-Bank, Glasgow, where the ship was laid up. 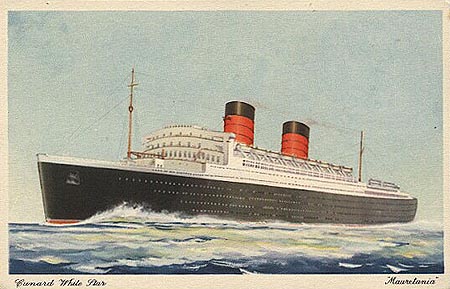 Commands of the Andania and Saxonia and Carmania (one voyage only) were followed by a return to the Mauretania, this time as a fully commissioned ship. The vessel had been fitted with six 6 inch guns and flew the White Ensign. The Mauretania transported thousands of troops to Liverpool, but in January, 1919, she was released from war service, and in June of the same year recommenced her regular passenger-carrying activities to New York. Rostron remained with the Mauretania until July, 1928 and took her on many record braking Atlantic crossings.

Sir Arthur was created a Knight Commander of the Order of the British Empire in 1926, and news of this was received by him whilst at sea. On arrival at New York he learned that a further signal honour had been awarded to him, namely the Freedom of New York "For his splendid services to humanity to the City of New York and to the people of the United States over many years'. Later he was appointed an aide-de-camp to the King and he was invested by the Admiral in Command at Cherbourg with the Legion of Honour.

Sir Arthur retired from the sea in May 1931, and he told much of his life story in his book "Home From The Sea." After his retirement Rostron remained active. He was a member, and for a time Captain, of the Southampton Master Mariner's Club. He was also actively involved in the British Legion. 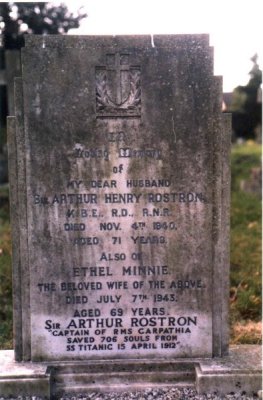 Rostron lived at Holmecroft, West End, Southampton. He died in Chippenham on 4 November 1940. after developing pneumonia. His funeral service took place at West End Parish Church on Thursday 7th November 1940. His last surviving child was Margaret E. Howman who was still living in England as late as 1993. His wife, Ethel Minnie Rostron died on July 7, 1943 at the age of 69 and is buried beside her husband in the graveyard of West End Church.