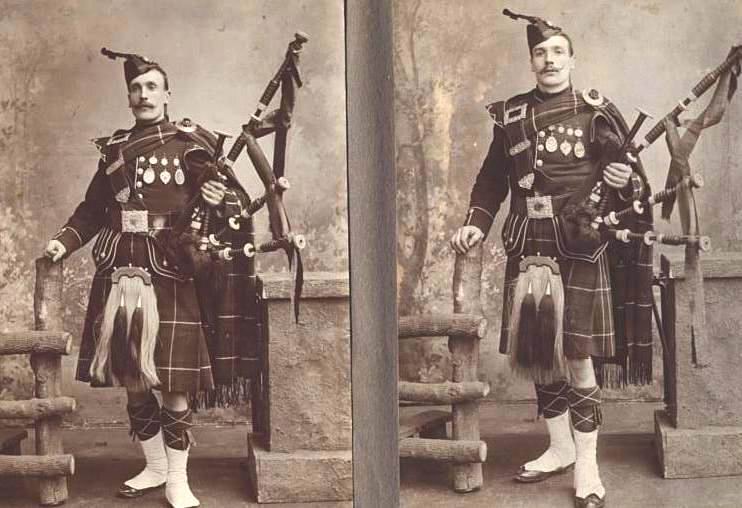 Stonehouse and more generally Scottish emigrees spread their gaelic musical heritage all over the world.

There is not a lot of piping info prior to WWI apart from the more famous individual pipers. No one really collected a lot of info in a hurry, as they had no idea that the cream of Scotland's pipers would be wiped out in the Great war. The Sorbies escaped this by emigrating around 1910, but other members of the Stonehouse Pipe Band would have ended up under Flanders soil.

Formed in October 1899 under Pipe Major Hector McIness they grew steadily and in the pre-war years, Stonehouse pipe band were big news. They are mentioned in a booklet about the famous Cowal Gathering which began in Dunoon, Argyllshire in 1894 and has now grown into one of the most spectacular Highland games festivals in the world http://www.cowalgathering.co.uk The pipe band competitions at Cowal started in 1906 with a competition for the Argyll Shield which became the World Championship. This was the most coveted trophy, awarded to the Grade One champions and donated to Cowal in 1901 by Princes Louise, Duchess of Argyll, the daughter of Queen Victoria.

A young Danny Sorbie - pictured in the early 1900's

Also from the Piping Times, Volume 45 No 6, a mention by Archie MacNeill:

"The first civilian band to make a real impact was Stonehouse. There were several good bands from that area. Stonehouse won the world championship shortly before the First War and they made a very good impression on everybody who heard them. Their pipes were so well tuned compared to the bands from the city. Previously very little attention was paid to the tuning of chanters or drones."

So, big news, the Stonehouse Pipe Band were World Champions in 1909, and were winners of the civilian championships in 1909, 1910 and 1911. Winning the World Championship means that they would have been up against all the armed forces and police bands, so they must have been quite exceptional.  Remember these were miners with coal dust in their lungs! I wonder what tunes they played, what tartan they wore, and what the badges in their glengarries were. 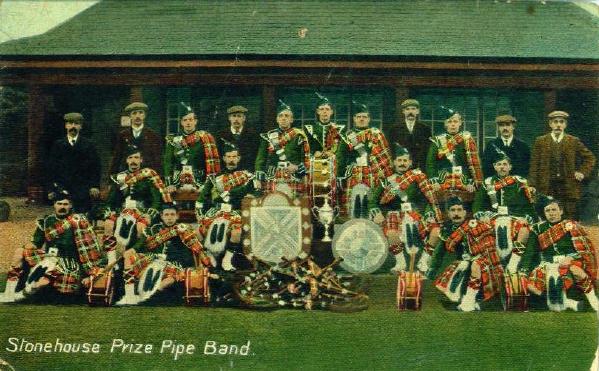 A superb colour postcard photo of the band provided by Gordon and Mary Rae of Montrose. Pride of place is the Argyll Shield and Lauder Shield. Gordon's grandfather David Collison and his great uncle Jim Whitelaw were members. Jim emigrated to New Zealand and bought Gordon a set of bagpipes which he still plays.

There is a short reference to the Civilian Contest in an old book titled "A History of Cowal Highland Gathering" and a note of the year that they won in last year's programme.  The band is erroneously referred to as  "Stenhouse" in a couple of places.

..."Prize money was fixed at £10, £7 10/- , £5, and 50/- for that year's contests and the Secretary of the Pipe Band Association wrote suggesting that bands in the Civilian Contest be permitted to choose their own tunes.  This was agreed on by the Games Committee who were of the opinion "the contest should be made as easy as possible".

Stenhouse Band won both the Open and Civilian awards that year...

The band began to break up around 1939-40 due to increasing pressure and competition from other bands, although the junior band continued into the 1970's. However from the ashes Stonehouse Pipe Band were reformed in 2007 with the intention of teaching a complete new band of beginners on both pipes and drums. This was under the guidance of Pipe Major Matthew Steele and Drum Sergeant Jim Schottner . The following year they played their first official engagement when they led the Gala day procession through the village and so a glorious tradition was revived.. In 2009 they celebrated their 110th anniversary and a century since winning the World Championships in 1909.

Many thanks to Sorbie descendant Adam Sanderson for carrying out the research and giving us the above overview.

From Fiona, the daughter of Gordon and Mary Rae who donated the colour photo above.

Based in West Lothian, Scotland they were established in 1972 :

The competition season is now over for another year. Cowal Highland Gathering on Saturday past marked the end of what has been a fantastic season for the Boghall and Bathgate Caledonia organisation.  The capes were out on what was a wet and windy day but it didn’t dampen the spirit of the band.

As always starting off with the Novice Juvenile grade the kids from Boghall and Bathgate Caledonia put their heart and sole into the performance and just missed the top 6 finishing a respectable 8th out of 18 bands.  A top 10 finish in this heat was nothing to be disheartened about. Next up was the Juvenile grade and another great performance from the youngsters of our organisation.  We weren’t the only people who thought they played well as the judges were all in agreement and Boghall and Bathgate Juvenile Pipe Band lifted first place, the overall Juvenile Champions of Cowal 2010.

Then it was time for the big boys… Grade 1.  The pressure was on for us as we were in the running for champion of champions drum corps (judged over the whole year to determine best drum corps for the whole year in the world).  We all came off smiling after what we thought was an excellent performance.  We couldn’t wait to get on the park for the results. 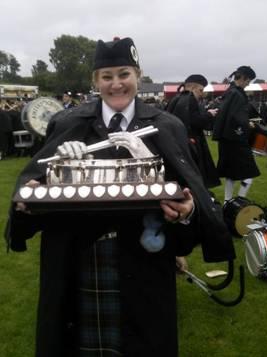 Fiona with the Drum Corps trophy 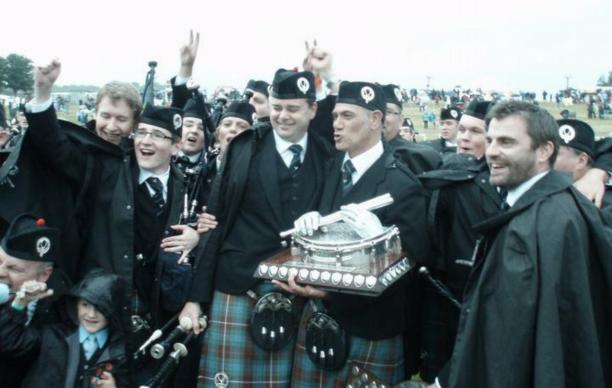 Cowal Champions Grade 1 (best band of the day) goes to Boghall and Bathgate Caledonia. The first Scottish Band to win a major championship for 3 years and the first major championship for the Grade 1 band at Boghall and Bathgate Caledonia in 10 years.  Winning the Argyll Shield (which is nearly as big as me) this was a remarkable achievement and a momentous occasion for me as my great granda and great great uncle won the same trophy 101 years ago to the day I won it.  They won it in Grade 1 with Stonehouse Pipe Band in 1909, the first civilian band ever to win it and to see their name engraved alongside mine made me feel very proud.  You can see the amount of names added to the trophy compared to back then.  Here is me with the trophy. 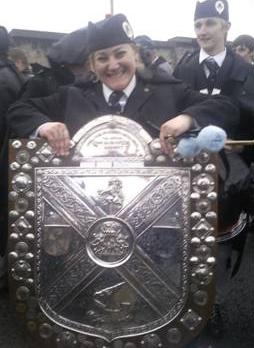 A delighted Fiona with the Argyll Shield 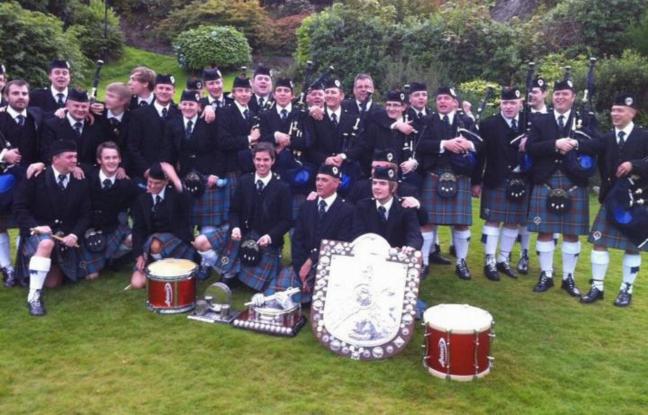 Return to 'Family of Thomas Sorbie and Jane Burke'