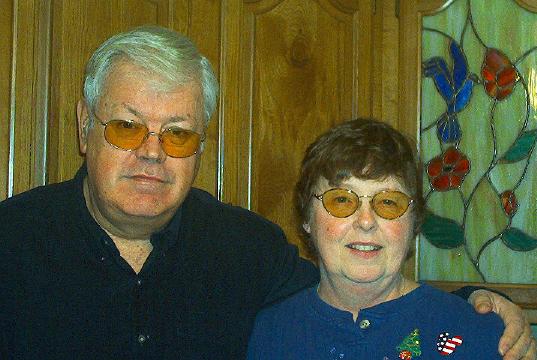 Andrew pictured with his wife Barbara.

A great many of the present day Sorbies are descended from John Sorbie, born in Stonehouse in 1740 and Andrew is no different. From here, his line of descent includes three Andrews and two Thomas Sorbies and follows a wandering trail that eventually crossed the Atlantic. Andrew was later to repeat the journey a number of times, but it must be said, in less orthodox circumstances.

Andrew's ancestors were of nomadic nature even for the mid 1800's as they criss-crossed Lanarkshire in the pursuit of gainful employment. Firstly his great grandparents Thomas and Jane moved from Stonehouse to Lesmahagow in 1867, then back to Stonehouse around 1880, then onto Blantyre in the north of the county. In different censuses Thomas appears as a coal miner and then later as a green grocer. It was in Blantyre where Andrew's grandfather Andrew, born 1870, married Mary Thomson on April 25th 1890.

Here Andrew's father, also Andrew, was born August 14th 1899 - the third of six children. The family settled in Blantyre for a number of years and it was there that Andrew's grandfather, a coalminer, died in 1925. Most of Andrew's uncles and aunts remained in the area after Andrew's father emigrated to the U.S.A. in the early 1930's.

Andrew's parents, Andrew and Mildred were married in the Bronx, New York City in 1936. Andrew was their first child, born July 1937 and two more sons and a daughter followed. Andrew married Barbara Ochs in Yonkers, New York in February 1960 and they have two daughters, Kathleen and Eileen and a son named... Andrew of course. 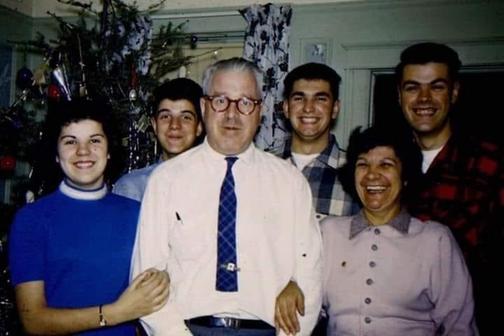 A great photo of Andrew Sorbie Snr (centre) with his family, pictured in the late 1950's.

However it was Andrew's career in the Navy that marks him out as a 'Famous Sorbie'. He describes it as "long, but fun". He started by enlisting in the Naval reserve at age of 17 before finishing High School. While in the reserves Andrew was assigned to a submarine outfit and decided right away that he liked it. When he embarked on active duty at the age of 20 Andrew was already a qualified Fireman and was assigned to several submarines - USS Grenadier, USS Ray and USS Harder as an Engineman. His next assignment was to nuclear power school where he received training in nuclear power plants and as a nuclear water chemist.

Upon finishing school Andrew was assigned to new construction in Portsmouth, New Hampshire where he helped to build the USS Thresher. Andrew even got to ride on the boat when it was actually launched. While aboard that vessel he was selected to attend college under a navy sponsored program. He went to the University of Oklahoma where he received a mechanical engineering degree. After this Andrew received a commission.

His next duty was aboard the Guided Missile Cruiser 'Chicago' in the weapons department. Andrew was assigned as the Gunnery Officer and then Antisubmarine Officer. He made 2 trips to Vietnam on that ship. Once again submarines called and Andrew attended a special officer submarine and Polaris missile school before being assigned to the USS Will Rogers as Weapons Officer. On board that boat he had the privilege of sailing from the U.S. naval base at Holy Loch, Scotland for over 2 years. He loved the country, but hated the weather..!!

After that last sea duty Andrew was assigned as an Assistant Professor at the United States Naval Academy in Annapolis, Maryland. He taught in the Weapons and Engineering Department for 5 years. Then it was time to retire from the Navy.

After leaving, he went to work for Westinghouse in the Pittsburgh area as a Senior Engineer building components for the naval reactors program. Andrew did that for 15 years when an opportunity in 1992 came along to retire early. He took that happily.

Since then Andrew has been doing volunteer work for seniors. He is a tax instructor and preparer for the I.R.S. (U.S. federal tax department) and a Medicare (senior health program) expert for the state and county governments. He also teaches safe driving for seniors and since they now have a submarine in his home town of Pittsburgh he has become a tour guide.

As you can see Andrew likes to keep busy. In his spare time he travels extensively with his wife. They have driven to Alaska and Nova Scotia in the last several years and in 2002 visited Antarctica and Russia.